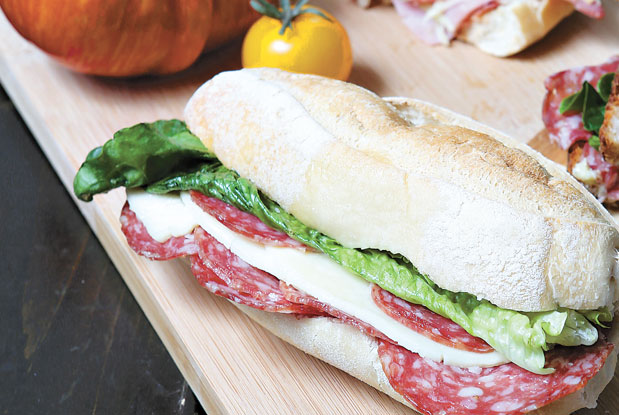 Grant van Gameren is joined by celeb chef Massimo Capra in sampling the city’s top Italian-style sandwiches. Which ’wich reps the Tricolore? Our chefs pick the city’s most authentic panini.

WINNER:
North Pole Bakery, 1210 Danforth Ave.,
Salami, Provolone & Romaine, $4
“The bread is good; they have a nice amount of meat,” says Capra. “I like the thick cut of the salami,” notes van Gameren. “I like that they don’t cheap out!” Both chefs agree: this sandwich checks off all the boxes. MEATY MAVERICK
Abruzzo,
9010 Yonge St., Salami, Ham & Capicollo, $6.50
“Oh, they’ve got my favourite, the capicollo di lusso!” says Capra. The downside is the bun, which doesn’t do much to stop the fillings from sliding out.

AMAZING MORTADELLA
Bar Buca,
75 Portland St., Mortadella, Stracchino, Green Tomatoes, $10
“I like the idea of pickled green tomatoes,” van Gameren says. “Someone put a little bit of extra thought in it.” “Mortadella is one of my favourites, eh?” notes Capra. He would, however, prefer even more meat.

CLASSIC COMBO
Mezza Notte Trattoria,
5304 Yonge St., Panino Rustico, $11
“I mean how can you complain about arugula, prosciutto and provolone?” asks Capra, of the classic pairing. “I do like roasted red peppers,” notes van Gameren. Bread with more of a crumb would’ve improved the sandwich.

INTERESTING IDEA
Lil’ Baci Taverna,
2013 Yonge St., Pancetta, Arugula, Roasted Tomato, $11
“I like the idea of the pancetta,” says van Gameren. Capra agrees but wishes it had been served raw: “Raw pancetta is the most spectacular thing in the world!” CHEFS MASSIMO CAPRA & GRANT VAN GAMEREN
One of T.O.’s best-known Italian chefs, Massimo Capra joins van Gameren this month in sussing out the city’s most scrumptious panini. Bread is the building block: “It should be soft and crispy and easy to chew,” Capra says.