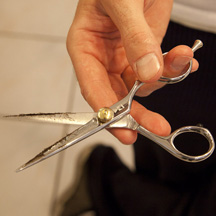 Eco-conscious and wicked-cool salon Parlour celebrated its 1st Anniversary this week with a righteous bash. Earlier in the day, multi-talented stylist Matthew gave me an eco-friendly haircut and showed me what the Parlour experience is all about.

So what exactly is an eco-friendly haircut, you ask?

My fears of wind-powered clippers and patchouli-based unguents were unfounded.

It turns out it’s really quite similar to a standard haircut, except that Parlour takes pains to reduce their footprint at every step of the process.

My hair was washed with paraben-free shampoo from Kevin Murphy. Customers are encouraged to bring their empty product containers back for refilling, with a nice discount provided for your efforts.

Finally, and most impressively, all the "waste" hair that gets swept up at the end of the day is sent to an organization called Matter of Trust, where the hair is stuffed into stockings (creating a hyper-absorbent hair "sausage") and sent wherever it’s needed to sop up oil spills. One would imagine Matter of Trust is sending a few hair sausages to the Gulf of Mexico these days…

Denied my first choice of a Justin Bieber look by lack of working material (male pattern baldness is a bummer), Matthew and I settled on a Don Draper-esque look, which he executed with surgical precision. It was the best haircut I’ve ever had, eco or otherwise, and I swear I’m not just saying that because it was free. After admiring myself in the mirror all afternoon, I returned to Parlour later that night to find the Pabst Blue Ribbon flowing and a party in full swing. It seemed like mere mortals such as this blogger were vastly outnumbered by models and very beautiful persons, but at least I had my awesome haircut to fit in with all the other amazing coifs. I have never seen so many well-styled people in one room. Photographer Joe Fuda (who shares a space at 134 Ossington with Project Runway Canada winner Evan Biddell) had set up a mind-bending installation he called a "Multigraph Photobooth" to document all the very attractive and cool people. If you’ve ever wanted to play euchre with yourself, you need one of these.

When the festive Happy Birthday keg cups ran out, I took my cue to leave. I raised a final Pabst to Matthew, who was on his way to play a show with his band isle of dogs. All in all, a great vibe and a very fun party. Kudos to Parlour’s first year, and here’s to many more anniversary parties. Next year, I’ll remember to bring my own reusable beer cup.

Stick it to BP and go get your hair cut at Parlour now!