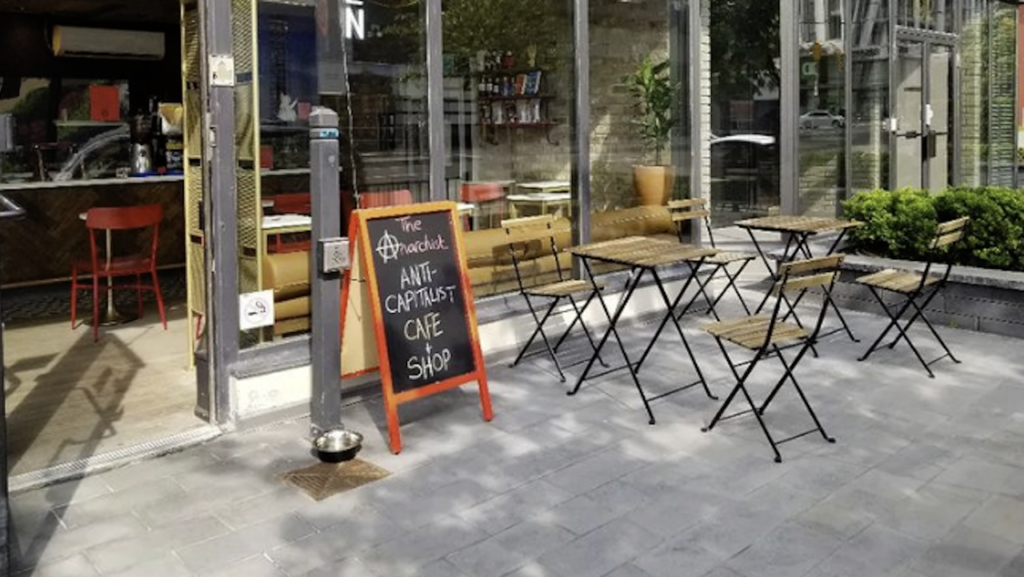 While one of the city’s newest cafes, The Anarchist, has certainly garnered lots of attention since it first opened its doors, not all of it has been positive.

According to the café’s website, The Anarchist is “an anti-capitalist, anti-colonial café, shop and radical community space on stolen land at 190 Jarvis St.” Alongside specialty coffee, the cafe serves up left-winged ideologies through radical books, totes, clothing and jewelry.

But in the three months since The Anarchist first opened its doors, it has been defending itself against online backlash as users question whether or not it’s truly as radically anarchist as they claim.

“Charging five dollars for coffee that costs thirty cents to make. That is capitalism,” says one TikTok user with over 105K followers, who, in his rant, declares to be “coming” for the owner.

“Come to my anti-capitalist coffee shop and buy my five-dollar donuts and countless other merchandise,” mocks another in a Quote Tweet.

The cafe is quick to point out, however, that they do offer the drip coffee at a pay-what-you-can rate, something which, they state in another comment reply on Instagram, they aim to do with more of the menu once they can.

Others are suggesting that The Anarchist is claiming these titles for publicity purposes without following through on their promises. “Getting publicity to grow your business. That is capitalism,” says the same TikTok user.

“To say that a small business IS anarchist and IS anticapitalist doesn’t make sense and feels like a marketing gimmick,” writes another on Instagram. “Why not just say your business is anarchist-run.”

The shop is called the anarchist but they adopt every progressive big government control program. Cool.

Fortunately for The Anarchist, there are some users who understand and appreciate The Anarchist’s radical concept. “Working within our systems but making it as anti-capitalistic as possible is the way forward,” comments one Instagram user.”Businesses will always be inherently problematic but it’s about reducing the harm as much as possible. So that better establishments are taking up space, rather than abusive ones.”

While The Anarchist seems to delicately respond to most online users by explaining their motives and goals, the account did finally post a more aggressive full statement last week. They reward people for being “cautious about the concept of a profit anti-capitalist business,” stating that the risk that the café will turn into a “’leftist-themed’ gimmick selling slave-made products keeps me up at night.”

But he continues to call out the haters. “You’re devoting your time and energy to doing the right’s dirty work, and you are the greatest obstacle to revolutionary progress. Enjoy your digital echo chamber. I’ll just be over here TRYING to do something.”