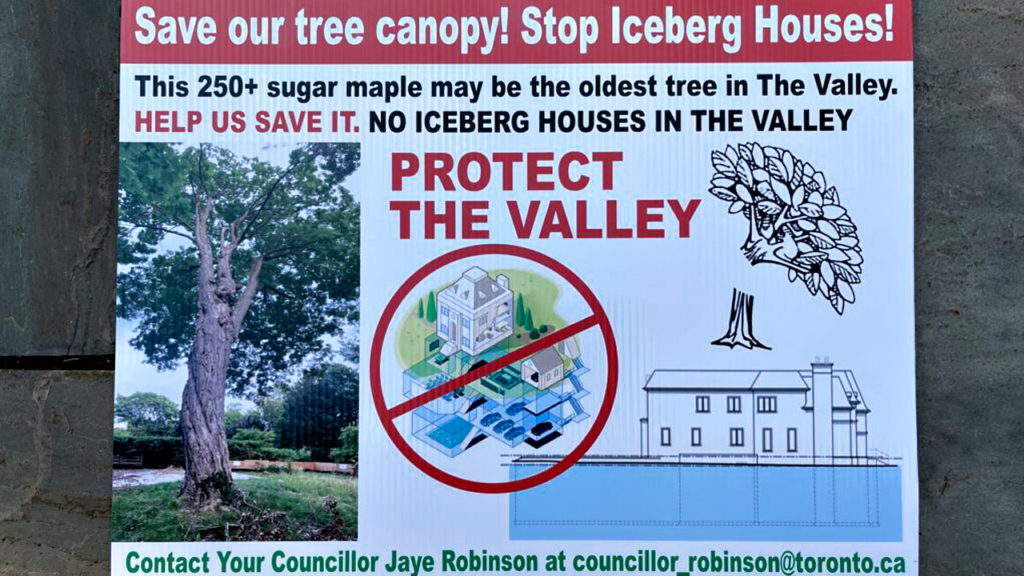 Toronto city council has voted to further investigate the impacts of “iceberg homes,” a new trend in Toronto real estate that has some residents uneasy.

Council voted in favour of a motion from Councillor Jaye Robinson for a report on “strategies to address the impacts” of iceberg homes, including a review of how such developments affect soil permeability and erosion, mature trees, stormwater drainage, and neighbouring properties.

The motion comes after an estimated 250-year-old tree was cut down in the Hoggs Hollow neighbourhood to make room for a new home with a huge, multi-level basement (the iceberg) featuring a basketball court, a karaoke bar, a stage with a golf simulator, three bedrooms, four bathrooms, and a five-car garage.

The term iceberg house refers to mansions that have an often massive underground living area that is much larger than the above-ground portion.

Hoggs Hollow residents protested the project at 7 Knightswood Rd., but the development was approved despite the city’s Department of Urban Forestry recommending against it and the fact that Hoggs Hollow sits within a flood plain and has had issues with flooding in the past.

There are few laws around iceberg homes in Toronto given their novelty, Robinson explained, which led her to introduce her motion. However, in London, England, laws have been introduced to limit how far they extend underground and to restrict them to a single-storey basement after reports of neighbouring properties’ foundations being affected.

“The city hasn’t sat down and designated any rules for [iceberg homes],” said luxury home developer Paul Miklas of Valleymede Building Corp. “So right now, subterranean is wide open — if you’ve got something that works, [the city] is just letting people go.”

Miklas has just finished his first iceberg home in the Bridle Path neighbourhood. For this build, he constructed a golf simulator and a basketball court that were 23 feet below a carport. He said he was inspired by the trend in England and felt it was necessary to not disturb his client’s backyard.

“I think [iceberg homes] are amazing,” he said. “It really does help add space without actually adding more surface dwellings or structures.”

Miklas said he does feel that the city should introduce laws around them to help protect old trees and ensure that neighbouring structures aren’t affected, and said their construction can be “challenging” and requires a reputable builder.