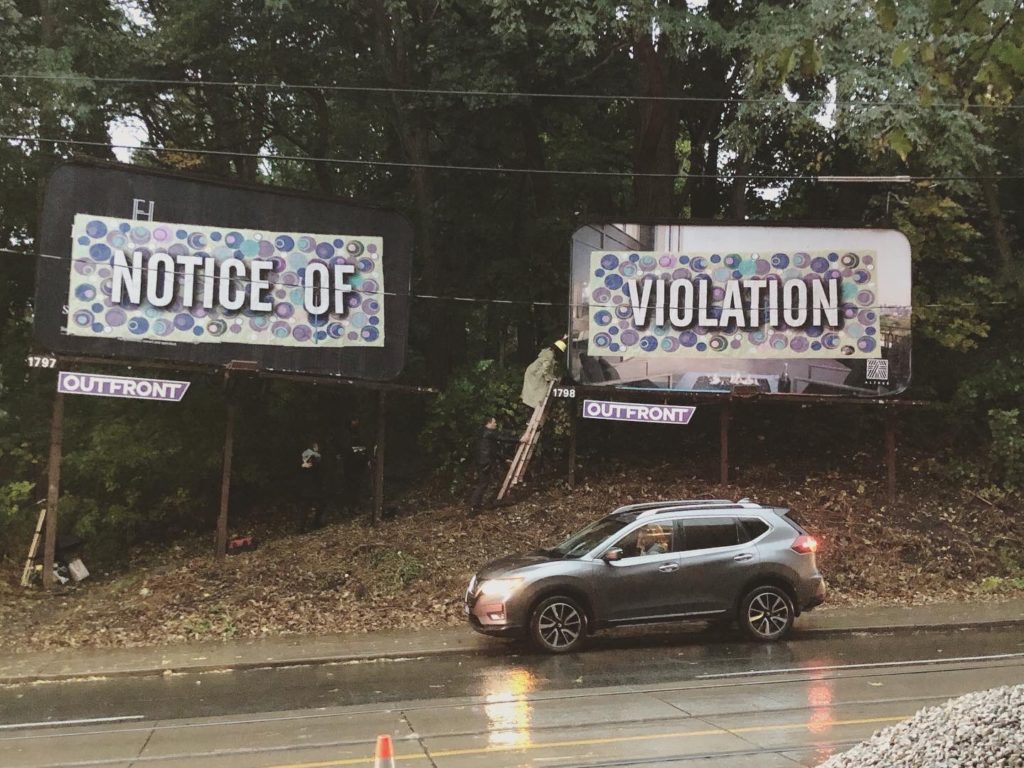 If you’re driving on Bathurst Street, just north of Davenport, look up and you just might see the largest ‘Notice of Violation’ signage you may have come across.

After 15 years of complaints to City Hall falling on deaf ears, residents living in Ward 12, Toronto-St Paul’s decided to poster over two billboards they say have no permits and claim that there are dozens of additional corporate billboards around Toronto operated illegally.

This comes after one of the residents, Dave Meslin, filed a Freedom of Information request after repeatedly being told by City Hall that the signs could not be removed due to “new information.”

According to Meslin, that new information turned out to be a letter from the billboard company that outlined their arguments as to why the signs should stay up. This was the tipping point for those living in Ward 12.

“They never produced a permit, nor any evidence that a permit ever existed,” Meslin said. “We’ve completed our research and we’ve confirmed that these signs are indeed illegal.”

Calling out the billboards as being “visual pollution without a permit,” Meslin believes that the city’s public spaces should be democratically controlled by the people who inhabit the area.

In a video posted on YouTube, residents calling themselves the “DIY Bylaw Enforcement Squad” can be seen making and then putting up the “Notice of Violation” billboard while Britpop band, Elastica’s Connection plays in the background.

Meslin feels that City Hall has chosen not to enforce its own bylaw and that this is an example of “bureaucratic negligence, and an abdication of responsibility.”

“These spaces belong to us, the residents of Toronto,” added Meslin. “We should be able to decide what our neighbourhoods look like — not the advertising companies.”