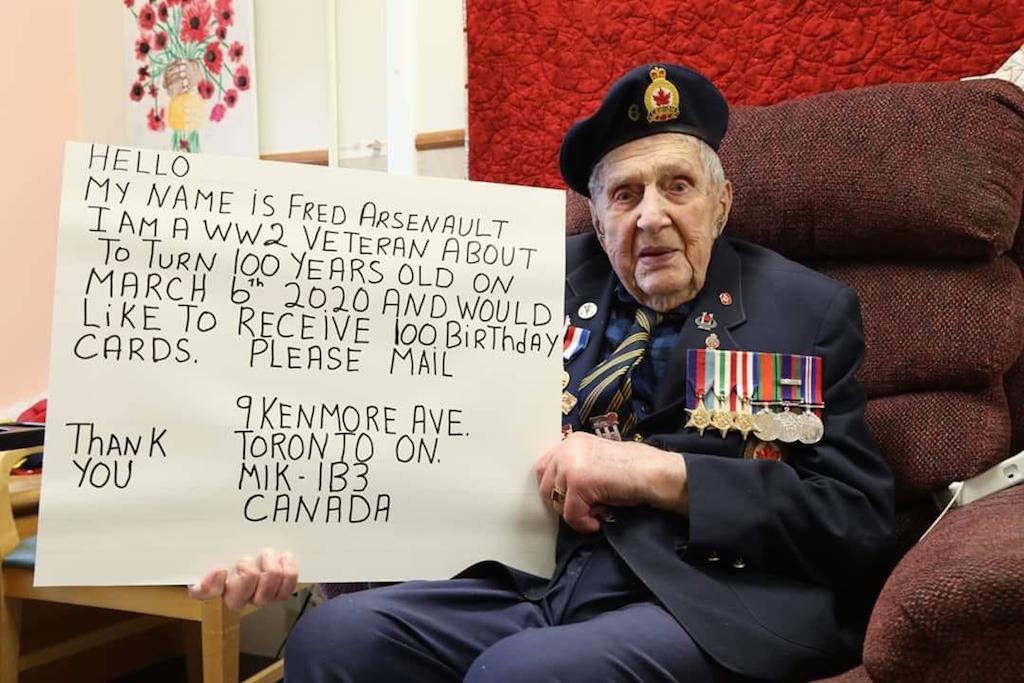 A photo of Fred Arsenault, a veteran who served with the Cape Breton Highlanders during the Second World War, was posted on Reddit’s Toronto page. In it, Arsenault is holding up a sign stating that he is celebrating his 100th birthday and would like 100 birthday cards.

The photo and Arsenault’s plea quickly became very popular and has been shared throughout social media and on local media outlets.

Encouraging people to send birthday cards to WWII veteran Fred Arsenault. He’s turning 100 on March 6. Let’s get those cards in the mail to let him know we thank him for his service and wish him a very happy 100th birthday!
Thanks to @NEWSTALK1010 for sharing this post today. pic.twitter.com/rkTHfQoQxH

A commenter on Reddit noted the medals worn by Arsenault in the photo and described them as follows:

“Starting from farthest right to left the medals are 1939-1945 medal for the defeat of Germany, Canadian volunteer medal given to soil divers who volunteered, home defence medal given to people who helped defend Britain, a France and Germany star for taking any action on that part of the continent, an Italian star for taking part in action at Italy and lastly a 1939-1945 star not sure what that one is for.”

Once, buried alive by an enemy shell. His brothers dug him out.

Once, a man standing beside him was shot and killed by a Nazi sniper.

Once, Ortona, Monte Cassino, north through Italy to France.

Now, he’d like to hear from you. Please write.

Arsenault’s sign also includes his mailing address in Scarborough. Let’s make sure he gets at least 100 birthday cards this year.