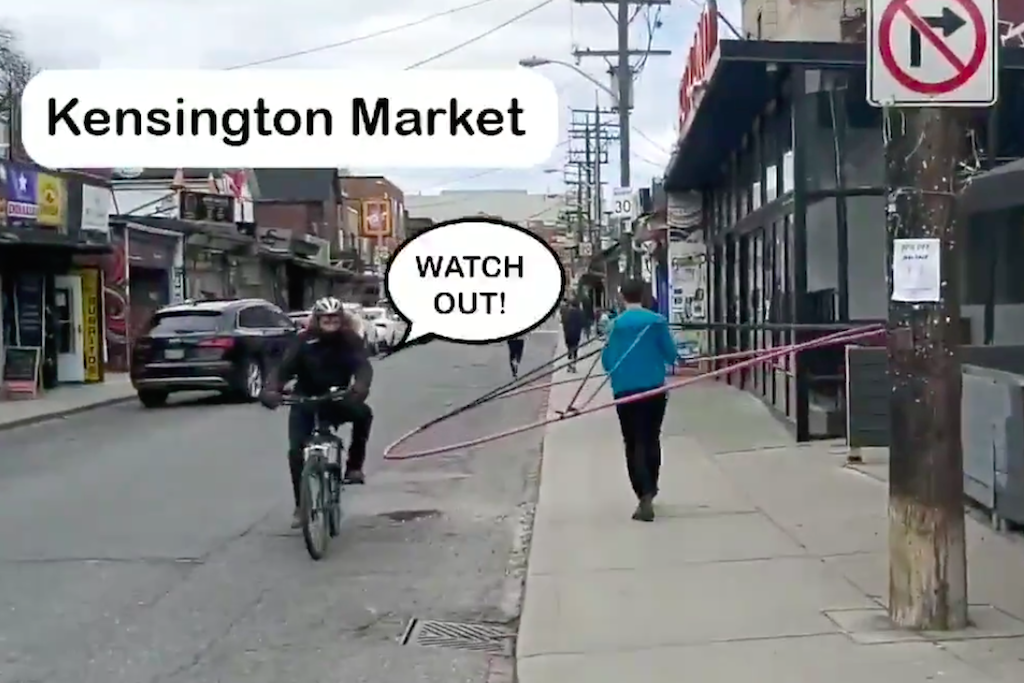 In recent weeks, pedestrian advocate groups in Toronto have asked the city to either shut down major roads to car traffic or reduce the number of lanes to help make more room for social distancing pedestrians and cyclists, as well as emergency vehicles. The notion is that pedestrians can spread out while practicing proper social distancing from each other during the COVID-19 crisis.

As one person tweeted: “Cars can’t catch COVID. People do. Give us space.”

@JohnTory this public health crisis requires public space and it is within Toronto’s emergency power to close lanes on Bathurst and Dundas, and throughout this city.

What justification is there to keep these lanes open?

Cars can’t catch covid. People do. Give us space.

Last month, Councillor Kristyn Wong-Tam, who represents Ward 13, Toronto Centre, requested that emergency management officials consider the idea of closing part of Yonge Street to cars, so that the residents living on and around Yonge would be able to get outside without being squeezed in on sidewalks.

“Our sidewalks are generally very narrow, especially for the most densely populated neighbourhood in the country,” Wong-Tam told the CBC in March.“With everyone passing each other shoulder to shoulder, it’s impossible to maintain a separation distance of 6 ft.,” Wong-Tam added in a tweet last month. “In the time of #COVID19 we need #YongeTOmorrow today.”

On Monday, Wong-Tam shared a video of a pedestrian utilizing a “social distance machine” to show just how narrow sidewalks are to practice safe social distancing.

“Keeping a minimum distance of 2-metres on narrow sidewalks is impossible as shown here and why people #TakeTheStreet. #COVID19,” she tweeted.

Keeping a minimum distance of 2-metres on narrow sidewalks is impossible as shown here and why people #TakeTheStreet.#COVID19 https://t.co/kPmZy7RocR

The machine was created by Daniel Rotsztain, a Toronto-based artist, writer and cartographer. For the short video, Rotsztain created a hoop mechanism that he could wear to walk the streets. The hoops, presumably, set a set six-foot perimeter from whoever wears it. The video shows Rotsztain trying to navigate the narrow sidewalks in neighbourhoods such as Kensington Market as well as along Yonge Street. The conclusion was that the only safe place to keep six feet of distance is in the middle of the road.

While other populated cities are looking at barring traffic from parts of their streets so pedestrians can spread out  — Calgary, for example, introduced temporary lane reductions late last month to make room for more social distancing and Vancouver is exploring for more ways to provide more space for residents who need to go outside — Toronto might not follow suit just yet.

Jacquelyn Hayward, director of project design and management for Toronto transportation services, confirmed with the Toronto Star last month that the city wasn’t planning measures to provide extra space for pedestrians on streets during the crisis, noting that closing streets to car traffic could undermine Toronto Public Health directives against people congregating in groups.

Councillor Mike Layton (Ward 11, University-Rosedale) reiterated the city’s response after being asked for his insight into the situation.

“I have forwarded the request to public health previously. They are advising us on this and COVID-19 response and their advice is not to do this. They are the experts and I would not advocate for something that they are advising against,” Layton tweeted.

I have forwarded the request to public health previously. They are advising us on this and COVID-19 response and their advice is not to do this. They are the experts and I would not advocate for something that they are advising against.

Still, social media is divided on the issue. Some agree with the city that it will simply invite more people to congregate in certain areas.

“To be honest when I heard about this it felt like a bad idea,” one person commented in a Reddit thread on the subject. “A closed off Yonge street has ‘summertime street party vibe’ all over it. It could actually get MORE people out of isolation. We already see they can’t stay out of parks now, if we open (Yonge) street it gives a message like “oh it’s ok to come out now!”

While others including the former chief planner for the City of Toronto Jennifer Keesmaat suggest that walking and cycling aren’t leisurely activities, but fundamental to health and mobility.

The argument against making streets available to pedestrians + cyclists has been that doing so might promote congregating. This is old school thinking that assumes walking + cycling are primarily leisure activities, as opposed to fundamental to health and mobility. #TakeTheStreet