Toronto restaurateurs are furiously reworking their compensation system, some doing away with tips - Streets Of Toronto
Skip to content 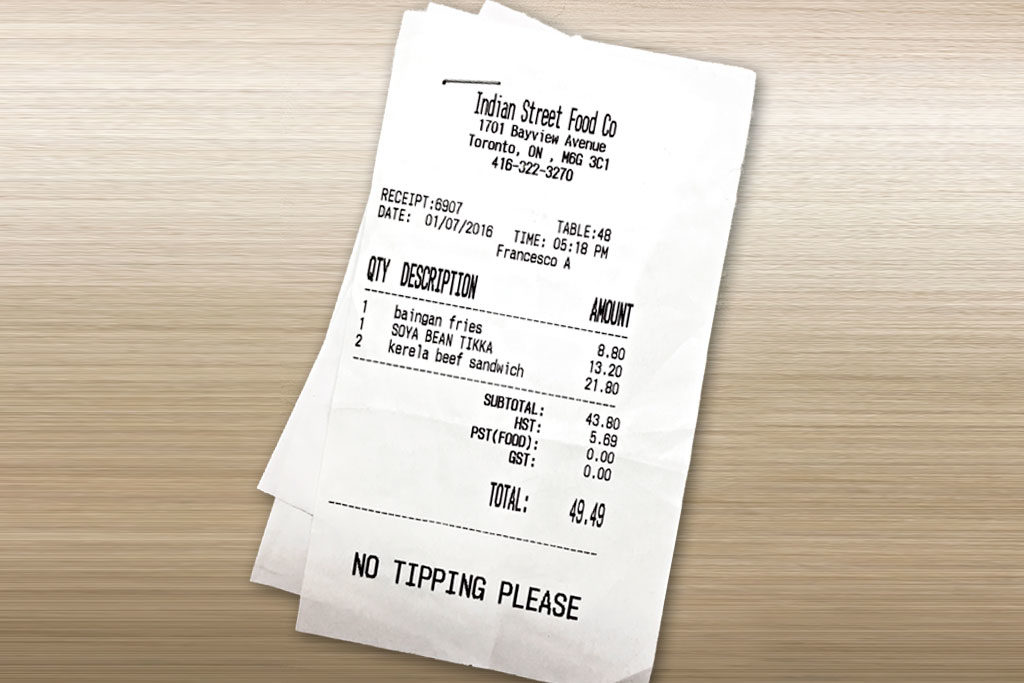 ­­In restaurants across the city, change is stirring. Tipping — a practice defenders argue rewards good servers and punishes the inattentive — is being re-examined and questioned.

Originating centuries ago in Europe as a way for aristocrats to ensure prompt service, tipping is said to have gotten its legs in 17th-century England. Some speculate that the term itself is  an acronym plucked from coin bowls labelled “to insure promptitude,” which were found in British coffee houses.

The act of tipping is not a standard practice in all countries, but it has endured in North America. But some restaurants are beginning to question the current status quo and are implementing new business models.

In Toronto, the restaurateur getting the most ink for his new approach is Hemant Bhagwani of midtown’s Indian Street Food Co. In November 2015, Bhagwani began charging a 12 per cent administration fee, which he divides among his staff along with 10 per cent of ISFC’s revenue. Bhagwani says his front-­of­-house staff (servers, bartenders) makes $25 to $30 an hour with the new system, and his back-of-house staff (dishwashers, cooks) makes $21 to $25.

So far, the change has been successful, and Bhagwani is implementing it in his brand new Thornhill restaurant, the Fat Beet. However, he concedes, the system isn’t perfect yet.

“I know there is a bit of tweaking required here and there, depending upon circumstances,” he says. “But, we are getting there.”

By revamping the industry’s traditional business model, Bhagwani hopes to remedy the discrepancy between FOH and BOH wages. He also wants to have his employees more invested in the success of the business. Having them share in a percentage of the profits seems to have accomplished that. Sales have increased across the board and relationships between the FOH and BOH staff have sweetened.

“Everyone has been working hard,” Bhagwani says.

Shahir Massoud, executive chef at Levetto — a fast-casual Italian eatery that pays staff hourly and splits tips — has been on both sides of the equation. He has felt the animosity between the FOH and BOH staff first-hand.

“Coming from a cook background, I appreciate any well-intentioned attempt to bridge that gap,” he says. At fine dining establishments, “the cooks are there all day, and then servers will walk in with designer bags an hour before service, then walk out with a wad of cash,” Massoud says. “You’re looking around, like, ‘How does this work?’ ”

However, “As an operator I’m really happy if [the servers] up sell that wine!” Massoud continues. “You always want to put yourself in the shoes of the operator, the cook, the consumer and the server.” Massoud posits that all four parties need to be on board for any new system to work.

Sidecar and Toronto Temperance Society owner Bill Sweete announced that he will be eliminating tipping at his businesses by May 1 and increasing menu prices by 15 to ­20 per cent. Sweete’s strategy is similar to one put in place by famed New York restaurateur Danny Meyer last year.

Among Meyer’s 13 restaurants are some of New York City’s most prestigious eateries, including the Modern, Gramercy Tavern, Maialino — plus the fast-food phenomenon Shake Shack. All are slated to have tipping eliminated by the end of 2016.

Although Meyer had been considering the idea since back in the ’90s, he wasn’t the first New York restaurateur to put it into action. The credit for that goes to Canadian ex­pat Amanda Cohen, chef-owner of the buzzy Lower East Side vegetarian restaurant Dirt Candy.

“I spent months on this, so I considered pretty much everything.” Cohen says. “Dirt Candy was the first restaurant in New York City to do this. I was out there on my own, and it was terrifying.” Since eliminating tipping at her restaurant and including a 20 per cent service charge, Cohen has noticed a change among her staff.

“The thing it’s done is that it’s given my staff a living wage — from my dishwashers, to my line cooks, to my servers — and that’s made them take this job more seriously than being just another service industry job,” Cohen says. “They’re really passionate about working here.”

Like with Bhagwani, the back­lash Cohen anticipated never arrived.

“The reaction is that no one cares!” Cohen notes. “We’ve had three customers in the restaurant have questions about it or issues, and it was actually nice to be able to have a conversation with them.”

Nor has there been a mass exodus of wait staff for either Bhagwani or Cohen. Both have managed to retain their talent and achieve what they desired: more equality, consistent salary and a more team-oriented work environment.

Numbers behind the restaurant scene

Average shift for a cook
12 hours

Work week limit in Ontario
48 hours for most employers

Even the Province of Ontario is making adjustments to tipping legislation. Bill 12: Protecting Employees’ Tips Act, which comes into force June 10, prohibits employers from withholding tips from their employees, a practise that is disconcertingly common.

“The government has recognized that tips are a vital part of compensation for many in the service economy,” explains Emily Shepard, a Toronto-based employment lawyer. Shepard continues, “This legal recognition allows employees to demand payment of their tips and sends a warning message to employers that tips cannot be withheld or reduced on a whim.”

The new legislation clearly acknowledges the precarious nature of the industry and the difficulty some restaurant workers face in earning a basic living wage. That’s something Cohen hoped to eliminate from her restaurant: inconsistency.

This isn’t a trend that has gained universal acceptance, though, or is without skeptics. Although the need for Bill 12 reveals some inherent defects of the tipping system, most servers seem unwilling to abandon it totally.

Oliver Stern, general manager at Anthony Rose’s latest establishment, Bar Begonia, sees the benefit of the switch in the long term, but he insists the short-term effects could be dangerous.

“If we just switched over right now, we’d lose 75 per cent of our servers,” Stern says. “There are a lot of smart, educated, talented servers that will leave.”

Even if these new models — like Cohen’s and Bhagwani’s — saw widespread use, he says, servers would still opt for the old models.

“If half the restaurants in the city do that, the servers will still want to work where there are gratuities,” he says.

A longtime server at a popular Italian restaurant spoke to us on condition of anonymity, backing Stern’s opinion.

“Serving is a lot harder, more involved and taxing physically and mentally than many people believe,” the server said. “Tipping creates a relationship between patron and restaurant. If tipping were eliminated, many of the charismatic, intelligent servers you’ve enjoyed at restaurants will leave and seek other employment. Those who stay in the field will try a lot less to impress.”

Although examples of successful new systems are now in place, earning potential comes above wage equality for some servers.

Though new models aren’t likely to become the norm in the near future, tipping could be on its way to its tipping point.