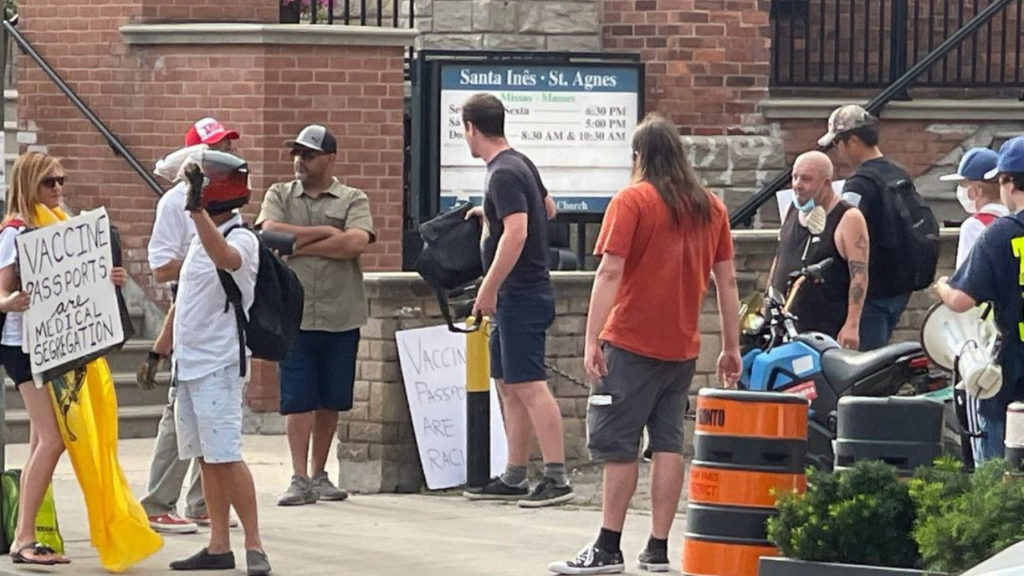 A Toronto restaurant owner known for being vocal about issues within the dining industry has spoken up about the harassment she has faced from anti-vaxxers and the subsequent lack of response from the city and law enforcement.

Jen Agg, who runs multiple restaurants in the city, posted on social media on Sunday about protesters who have been harassing patrons at Dundas West’s Bar Vendetta and Rhum Corner for weeks. The protesters, who have been stationing themselves outside of the restaurants, some with posters and chants that call out Agg by name, could have been spurred on by Agg’s support for vaccine passports for residents.

I am not comfortable with the idea of eating inside a restaurant with unvaccinated people. Vaccine passports now! https://t.co/gSWflaFMJq

Protesters can be heard chanting “no vaccine passports” in a video Agg captured of a group of them, unmasked, of course, gathered outside her restaurant. Agg, by the way, noted that her restaurants do not require vaccine certification, and instead are only open for outdoor dining.

For weeks now, we have been targeted by loud, misguided, hugely invasive anti-vaxxers at Hoofland on Saturday nights. I am in ~shock~ that @JohnTory & @fordnation are leaving us to deal w/ this—ZERO help from cops, by-laws or…anything at all. An abandonment of leadership. pic.twitter.com/8hlv4FxaYo

In the video, Toronto police are seen standing by, doing not much at all. Agg stated on Twitter that the officers told her it was not harassment and was a peaceful protest, though she argued that the protests violate Section 2(c) of The Canadian Charter of Rights and Freedoms on the freedom of peaceful assembly, which does not protect riots and gatherings that “seriously disturb the peace.”

Agg called on Mayor John Tory and Premier Doug Ford to step up and do something to curb the harassment.

If @fordnation wants to protect businesses, then he needs to step up and do that! Leaving us to fend for ourselves while these clowns cause chaos & prevent us from properly utilizing the CafeTO patios designed to help us get on our feet after a TERRIBLE 17 months is appalling. pic.twitter.com/jYIoIDs6QE

Her posts garnered quite a bit of attention, including from Schitt’s Creek star Dan Levy.

There’s choosing not to get the vaccine and then there’s this. Disturbing the peace, violating patrons’ personal space, and actively sabotaging the livelihood of restaurant owners? Something needs to be done, Toronto. cc @JohnTory @fordnation. https://t.co/iyzPfEofa2

On Monday, Tory posted a statement on Twitter in response, writing, “It’s totally unacceptable for for people under the guise of protest to disrupt Toronto restaurants and other businesses and mistreat and harass their customers.” He said the protests may have crossed the line into “mischief and harassment” and said he brought that to the attention of the Toronto police chief.