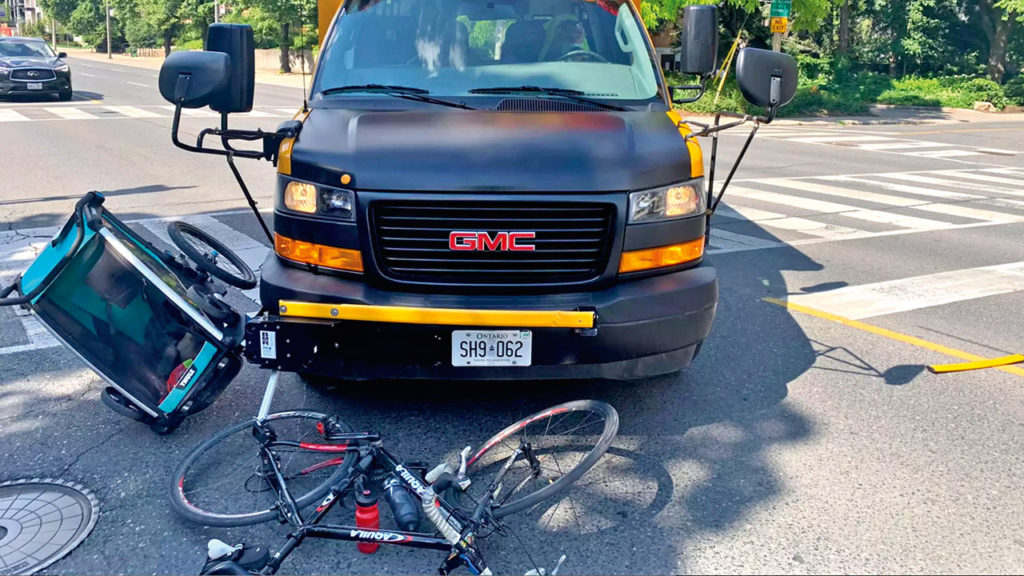 Recently, a cyclist was hit by a school bus while trying to cross Avenue Road in midtown Toronto. It’s not the first time someone has been hit along Avenue Road and it won’t be the last, which is why local residents and residents’ associations have been calling for the six-lane stretch of the thoroughfare south of St. Clair to be reimagined as a complete street that makes vulnerable road users the priority instead of automobiles.

Brock Howes was cycling along Cottingham Avenue in the summer when the incident occurred. Cottingham is a small two-lane residential street that runs east-west and ends at Avenue Road. A trailer was attached to the rear of his bicycle, although his kids were not in the trailer at the time.

“I was seated with one foot on the ground, one foot on a pedal. Usually I’d … pull out and use the road on the other side, but I saw the bus coming and was able to fully dismount and jump away from the bike as he hit me,” said Howes.

Howes ferries his kids across the city in the trailer and was on his way to Branksome Hall on July 19 for summer camp pickup.

He said the bus driver stopped after hitting him.

“I think he was in shock too,” said Howes.

The issue with Avenue Road, one that has been ongoing since the stretch was widened by the city to six lanes some 60 years ago, is that once drivers hit St. Clair and head downhill, speeds increase and the risks to vulnerable road users skyrocket dramatically.

People have died, including Miguel Escanan, a teenage cyclist, in 2021.

Howes said he would like to see Avenue Road returned to four lanes with wider sidewalks and protected bike lanes with some separation from vehicles.

“If we could make the lanes a bit more narrow and less direct that would be even better,” said Howes.

He’s not the first to advocate for improved safety on Avenue Road. The Avenue Road Safety Coalition has been trying to convince the city to make changes for at least six years. Although it was a slow start, the city is finally studying the situation.

“One of the major things that we found out is that 85 per cent of the vehicles travelling on Avenue Road are either travelling at or above the posted speed limit,” said Arlene Desjardins of ARSC. “And one of the shocking things that I had heard (at a community police liaison committee meeting) is that the Avenue and Davenport intersection has the second highest rate of collisions within 53 Division.”

There is no question that Avenue Road is not as safe as it could be. But as it is one of the main ways commuters and residents get downtown, change has been glacial.

“I think in 2017 there was a community meeting at Timothy Eaton Church, where the city presented its work,” said Henry Wiercinski, of the Annex Residents’ Association.

“And when the residents looked at it, it was basically a traffic survey for cars. I don’t think they ever mentioned the word ‘pedestrian.’ ”

The City of Toronto, according to Wiercinski, would consider looking at significant street improvements for Avenue Road when it was up for renewal — in 2040. Needless to say, local residents were not impressed and pressured the city and elected officials.

The city is now studying Avenue Road, between Bloor Street and St. Clair Avenue “to find opportunities to improve the street with an emphasis on safety, mobility choices, and enhancing streetscape. Streets are places where everyone should feel safe, comfortable and connected,” reads the city’s webpage.

But, it’s not moving fast.

“We’re not going to wait until 2040,” said Wiercinski. “What we’re looking for are action items that can be implemented now, short of rebuilding the road to try to make it a more pedestrian-friendly, people-friendly environment.”