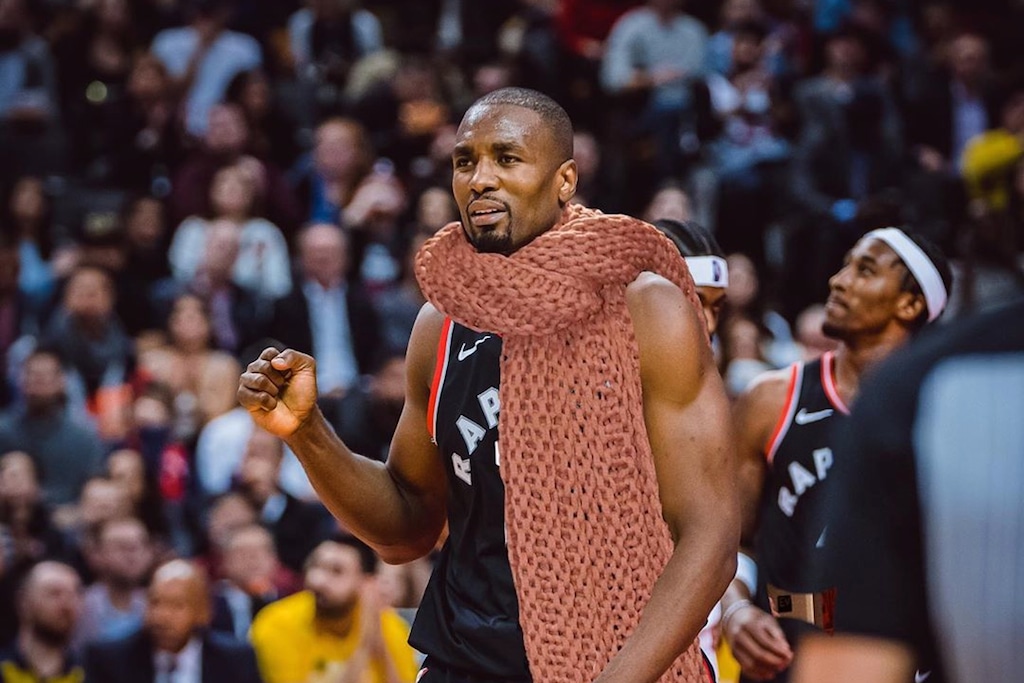 These days it seems like there’s nothing Serge Ibaka can’t do.

The Toronto Raptor sunk a game-winning three-pointer Wednesday night to break the franchise record with a 12-game winning streak. He also recently became the first NBA player in history with 500 three-pointers and 1,500 assists.

But basketball isn’t the only thing this Raptor has going for him. The power forward is known for his style, his culinary skills and his social media presence. So we thought it was about time to recap some of the most genius Serge Ibaka moments that have happened off the court.

On Avec Classe, Serge Ibaka’s new YouTube series with Holt Renfrew Men, he invited fellow Raptor OG Anunoby to Holts to help him up his fashion game. The episode turned into a roast when OG started to claim that he put Ibaka on to fashion and scarves in the first place. This sent the internet into a frenzy and coined the now-viral phrase, “what about scarves?”.

This then led to the pair duking it out in their respective scarves before Wednesday night’s game.

I’m dying. Serge and OG forever. “What about scarves?!?” pic.twitter.com/NfyJif44rV

When he posted this viral video

Aside from the fact that this video went viral almost instantly, it showed the world a different and more “fun” side of the quiet star player.

The time he served the Bench Mob lamb brains

They call them bench mob because they come off the bench ready to play… but they were not ready for Chef Mafuzzy… Episode 5 of #howhungryareyou coming up next week!! #mafuzzychef #benchmob #raptors

Serge is known for his culinary wiles on his YouTube series, where he brings guests on to chat and to eat some pretty interesting dishes. On one episode of the show, Ibaka had his teammates Fred Van Vleet, Normal Powell, Pascal Siakam, OG Anunoby and Delon Wright, better known as the Bench Mob, come on to chat about the upcoming 2019 season and enjoy a platter of brains spread on toast. Most of the teammates agreed the meal was pretty terrible, but Siakam later told the Bleacher Report, “It’s about eating nasty food but also bonding and talking about important things, which is cool.”

The time he surprised everyone at Rol San

Ibaka received a standing ovation when he surprised everyone at his favourite late-night Dim Sum spot after advancing to the NBA Finals in 2019. It’s a known fact that Serge loves Rol San’s fried rice and can be spotted there enjoying a post-game bite.

The time he asked the team how hungry they were

Fun Guy Kawhi only wants alcohol and desserts all the time 😂

Most of the team shouted for pizza and tacos but “fun guy” Kawhi came up with this gem of an answer.

Serge Ibaka is known for his style and his game-day looks. The six-foot-ten Raptor is always standing out in high-end threads from designers like Valentino, Balmain and Gucci. The Raptor is also the face of Nobis, Canada’s premier outerwear brand. He doesn’t like to brag but he told Avec Classe that he doesn’t just dress, “he does art.”