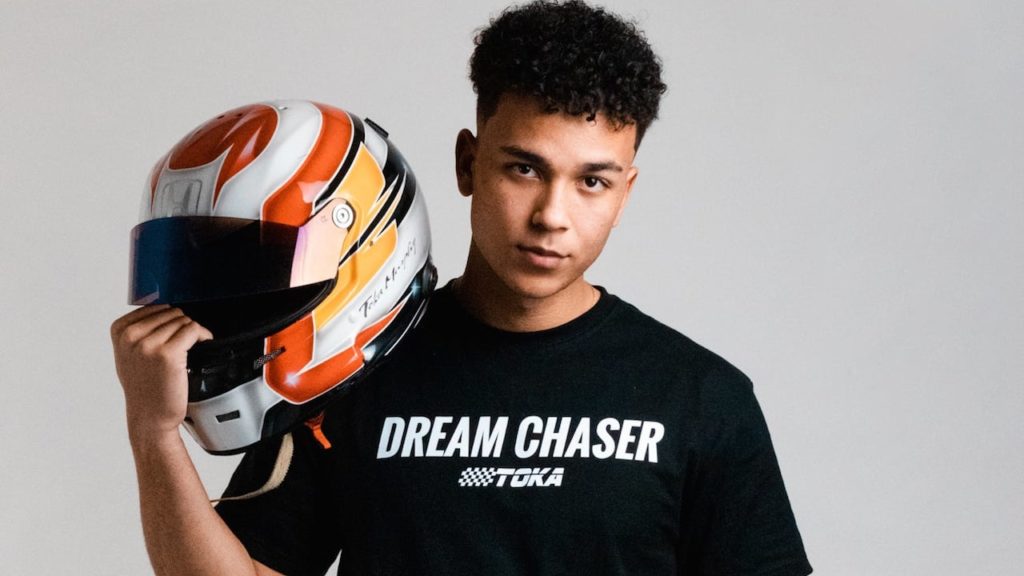 On semi-professional race car driver Toka Murphy’s website, six red words scroll across the bottom of the page, on repeat: “On a mission to go pro.”

That’s been Murphy’s goal since he graduated from high school at Northern Secondary School in 2015. Growing up, Murphy was a “car enthusiast,” able to point out and talk about any car. This “obsession” naturally led to a passion for race car driving.

But for Murphy, who grew up moving from house to house and often resided in community housing, it seemed unrealistic to consider a sport that he says would be lucky to cost him under $100,000 in a season.

“When I started working during high school and earning money for myself, I was inspired to keep working to make enough money to race,” Murphy says. He saved up enough to get his racing licence after graduating, despite knowing very little about the industry.

Then, in 2018, Murphy competed in his first race in the Super Production Challenge (SPC) series in the compact class. The SPC series offers a more accessible motorsports option for drivers of different experience levels and is one of the most competitive series within the Canadian racing market.

“I was so bad that they wanted to kick me off the track,” Murphy says, stating he was a hazard to other drivers since he was unpredictable and didn’t know what he was doing.

But under the wing of Kunick Auto Sport race team, Murphy learned the ins and outs of the sport, and by the end of that same year, he pulled off the championship.

And his passion only grew.

“There’s nothing you think about except racing. You’re in the moment. Time doesn’t exist,” he says. “And then when you get into the zone, the feeling is so euphoric.”


After that first season, Murphy knew he had enough talent to start racing more seriously and to actually succeed. He’s been funding his own career ever since.

Since his 2018 win, Murphy was crowned the 2019 SPC Compact Vice Champion. In 2020, he moved up to the production class, a faster category, and won the entire competition.

As someone who faced challenges getting to the level he’s at now, Murphy just hopes he can be a model to inspire others to go for their goals, even if they seem unattainable.

“I just want to inspire people to do what they want to do. You don’t have to follow the social norms. Do what you want to do.”

He explains that it was a risk dropping out of an engineering program at York University to put all his finances into racing and find work to live and pay for the sport, but it was one he knew he had to take.

“I don’t know which way is the right way, but I know I can take a step forward, and the more steps I take, I can start to learn which direction is better.”

He says following his dream is like walking through a maze: the path isn’t always laid out for you, but you’ll find your way: “I want to inspire people to just take a step forward.”

Following the completion of the 2021 season, Murphy is on the search for a new team for next season. He is always welcoming sponsors to help budget his racing so he can do it full time.