Toronto photographer Caitlin Cronenberg delves into breakups for her upcoming book, The Endings - Streets Of Toronto
Skip to content 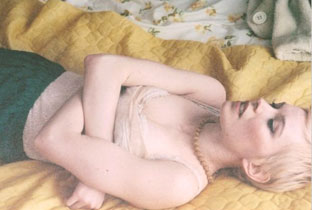 Less than a year after launching her first self-published book, Poser, Caitlin Cronenberg is at it again. The 26-year-old photographer has teamed up with New York-based art director Jessica Ennis to create The Endings — a book of breakups. Or, perhaps more aptly explained: a book of photos of re-enacted breakups.

While Cronenberg was interested in capturing the raw reaction of her subjects as they stood nude before her camera for Poser, she’s now looking to tell narrative stories with ten series of images.

“They’re based on real breakup stories,” explains Cronenberg, taking a quick break from shooting stills on the Toronto set of Cosmopolis (the latest film currently in the works by her father, David Cronenberg). “Some of the stories are taken from our own experiences, and friends’ experiences, but there’s also a submission section on our website where people can write in with their own stories.”

Cronenberg and Ennis plan to adapt these submissions and recreate the nuts and bolts of each story within twenty-odd photographs.

One shoot is already complete (see photo gallery below), and Cronenberg and Ennis are looking for some patron saints to help them continue their collaborative endeavour. While Cronenberg says each Poser shoot wound up being fairly cost-efficient (hey, no wardrobe costs, right?), each of The Endings‘ shoots will involve a considerable amount of capital to carry out.

Instead of digging into her life savings, as Cronenberg did to self-publish Poser, she and Ennis are asking for a little support from friends and family — and the trusty interweb — to get The Endings off the ground. Through kickstarter.com, the twosome are raising cash to cover basic costs of the shoots.  While all labour has been volunteered, Cronenberg is hoping that this advanced backing — $15,000 is their goal — will ensure that no one will have to go “out of pocket” this time around.