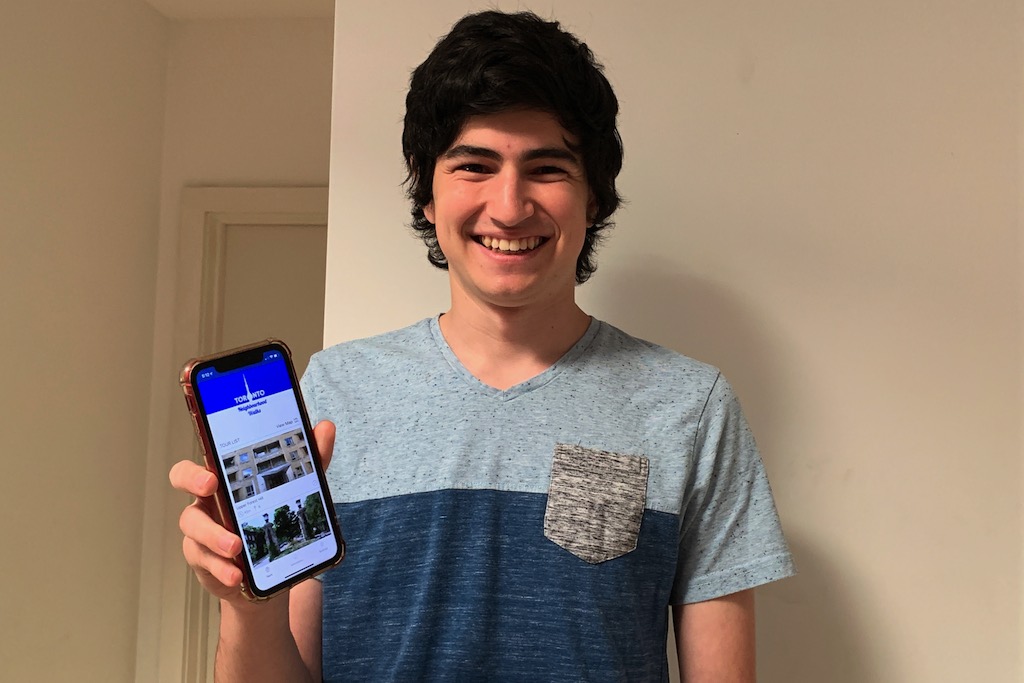 Teenager Jayden Daniels, 19, wanted to know more about the neighbourhoods he walked through during quarantine, but researching areas is difficult when there’s no access to libraries and archives. So Jayden took to the Internet to explore old buildings and flip through images of years past.

Daniels was so intrigued by his research that he created a free app to share his newfound knowledge with Toronto residents. The app is called Toronto Neighbourhood Walks and is entirely researched, photographed, and narrated by Daniels.

“I try to read everything on the internet about the neighbourhood, and then I narrow down the information based on what I think will be the most interesting, but also what makes sense in terms of the walking tour’s route,” Daniels says.

Matching research to a script and recording it isn’t a simple feat, so Daniels has come up with a foolproof plan to get it right.

“To write the script, I take the information I have gathered and narrowed down and organize it into an order that fits the route, then turn the notes and write them out as a script. To record the script, I lock myself in my parents’ closet and don’t come out until I’ve finished recording,” he says.

Daniels put up posters and took to neighbourhood Facebook groups to get the word out about the app. The response, he says, was positive, but he has encountered a few stares when snapping photographs for the app.

“I don’t record the scripts while walking, but I did take pictures for the app, and I definitely got some weird looks when I was taking pictures of people’s apartment buildings,” he says.

Dipping into the history of neighbourhoods is intriguing and a great way to escape present-day pandemic stress. Daniels says he enjoys learning about all the communities he explored, but some stand out more than others.

“The neighbourhoods each have their unique history and are all interesting in their ways, but I think my favourite tour is Upper Forest Hill. There’s a home in Upper Forest Hill that dates back to the 1820s and is very well preserved,” he says. “It’s a great example of what rural houses in Ontario looked like in the early nineteenth century. I’ve passed by the house countless times, but I had no idea of its historical significance until I started doing research for the tour.”

Daniels’s app helps users understand the buildings around them, but he wants to remind people that neighbourhoods have a past.

“History is everywhere,” Daniels says. “History is not just in museums or historical districts — you just need to look for it.”