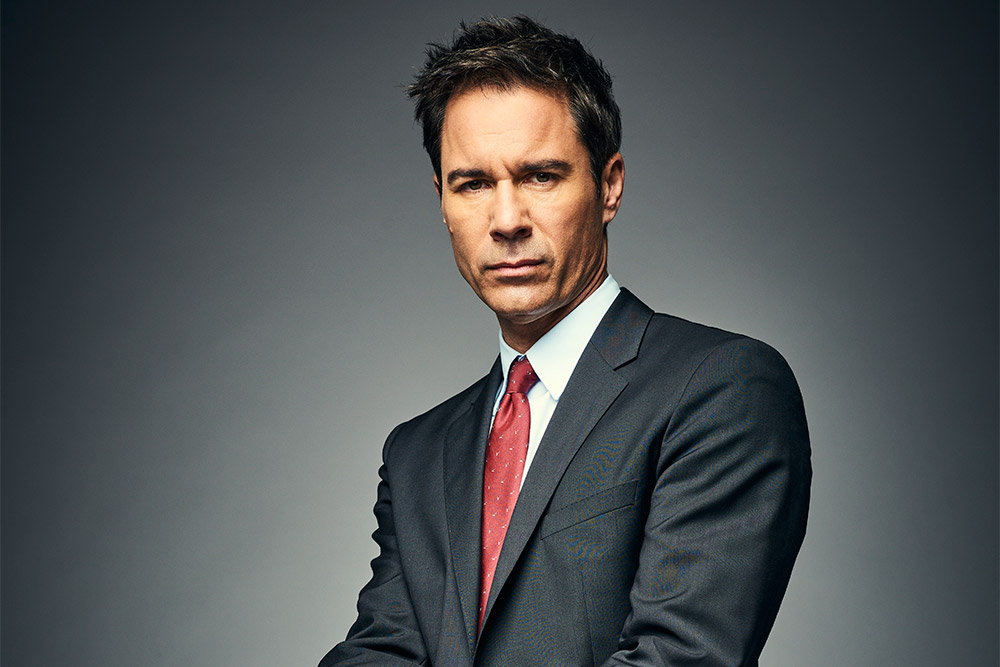 Although most people will recognize Torontonian Eric McCormack for his starring role as Will Truman in the hit TV series Will & Grace, McCormack has been working steadily and tucking into ever meatier roles ever since the sitcom went off the air more than 10 years ago. His latest show, Travelers, premiered in October.

Part time-travelling sci-fi and part undercover thriller, the Netflix and Showcase co-production follows the exploits of a group of time travellers sent back to 2016 from a distant and dreary future planet Earth. On their covert arrival to present day, the gang takes over unwitting host bodies in a bid to save humanity from its terrible future.

The show was written and created by Brad Wright, the Toronto-born TV producer behind Stargate SG-1 and its many spin-off shows. Where Stargate wore its sci-fi status on its sleeve, Travelers is more firmly rooted in reality.

Granted, the main characters are a group of time travellers, but the world they come to inhabit and the lives they take over will be familiar to everyone. This blend of science fiction and gritty, realistic elements gives the show a unique tone. It’s a solid drama with a futuristic spin.

“The director of the pilot established a really interesting, grown-up, modern feel that is different to any show I’ve been on,” says McCormack.

McCormack’s excitement for the role of Grant MacLaren, and the unique challenges it brings, is unmistakable.

The protagonist and his cohorts come from a very bleak future, a place where they don’t see sunlight or have access to good food. All of the elements of 2016 that we take for granted are constantly new to them.

“In the first episode, you can see all of the characters respond to daylight, fresh air, to driving a car. They’ve trained to do it in some sort of simulator, but they have never really seen 2016 freeways,” says McCormack. “Every single thing they do is new to them and it’s very tactile. That’s fun to play.”

And McCormack and his co-stars are always actually playing two characters each: who they are in the future and the host body they’ve taken over in 2016.

“We have a chance to play this kind of literal double life, which is what I think gives the series a very different flavour,” says McCormack.

The actor lives and works out of L.A. and Vancouver now, but he started life in Scarborough and still remembers the excitement of hopping on the subway to visit downtown Toronto.

“I think that’s what I miss [about the city]: being right down in Yorkville or Queen Street and just the particular feel of downtown Toronto.”

He still tries to get back to the city as often as possible to visit his brother and old friends.

When quizzed about what he doesn’t miss about the city, his answer of course is unequivocal: “Um … winter!”

After heading west to sunnier climes in the late winter of 1992, McCormack could not have known how bright his future would be.

He worked tirelessly for many years, landing small roles in Ally McBeal and Veronica’s Closet and even auditioned a number of times for the role of Ross on Friends, but it wasn’t until McCormack landed the part of Will on Will & Grace in 1998 that his career began its meteoric rise.

The Emmy Award–winning show ran for eight seasons and earned McCormack his own Emmy for Lead Actor in a Comedy Series, a Screen Actors Guild Award and five Golden Globe nominations. More than 18 million viewers tuned in to watch the final episode.

McCormack has spent his long and prolific career juggling film, television and theatre. He started out his career with a five-year stint at the Stratford Shakespeare Festival and has continued to work in those three media.

On Broadway, he starred in The Music Man as well as the Tony-nominated The Best Man opposite Angela Lansbury and James Earl Jones.

Despite his success, McCormack remains grounded. He spends his down time with his partner Janet Holden, to whom he has been married for almost 20 years, and their son, Finnegan, who turned 14 this summer.

“My hobbies are simple,” says the 53-year-old, who enjoys good food, cycling and riding around town on his Vespa.

Next up on his slate is the film Christmas Angel in Training, a Hallmark Hall of Fame movie with Shirley MacLaine (Postcards from the Edge, Terms of Endearment) and Kristin Davis (Sex and the City). He says his plan after that is to just keep on acting.

“In six years, my son will be out of high school, and I think that will free me to do more theatre,” he says. “I hope to go back to New York more, but it will be more of the same. I love going back and forth between all three genres.”