Could Toronto get its own mini-High Line with Market Bridge project? - Streets Of Toronto
Skip to content 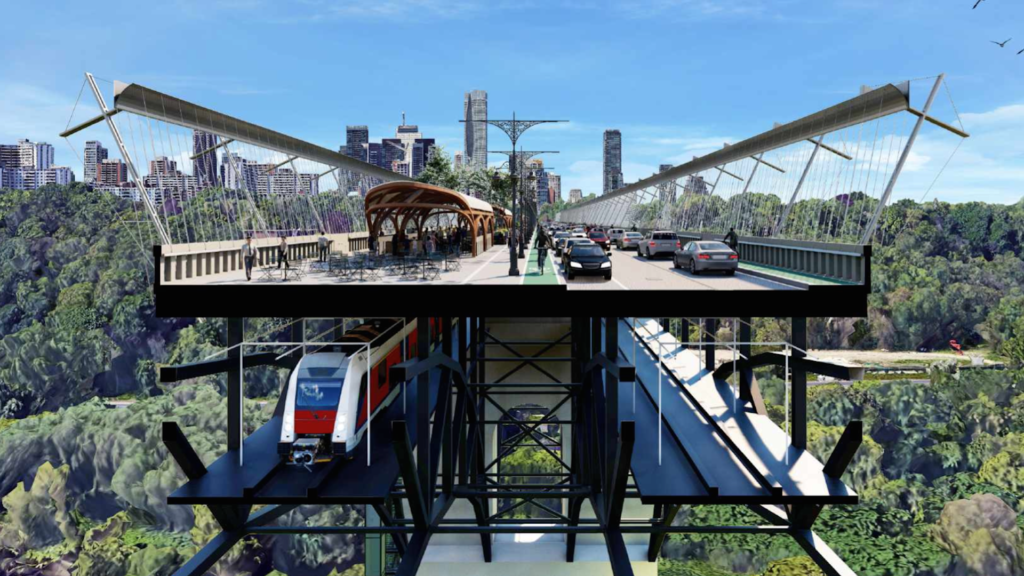 A Toronto architecture firm has reimagined the Bloor Viaduct over the Don Valley into a new mixed-use space dubbed Market Bridge.

The proposal for the Market Bridge along Bloor-Danforth comes from Farrow Partners Inc., Architects, and aims to create a “generous new pedestrian realm for the city,” according to promotional material.

The idea is somewhat inspired by New York City’s High Line, which took a piece of city infrastructure — an unused railway — and transformed it into a vibrant public space.

The Market Bridge would be a mix of public art and market stalls in pavilions, according to Farrow Partners.

“Imagine a destination for hearing street performances and music, a place where one can buy fresh produce and wander fresh flower stalls; a place to sample from specialty food stalls, enjoy cafes and restaurants,” Farrow Partners said in a brochure, adding that it would include “enclosed community space which organizations can use for meeting or events — all driven by a social and civic goal of causing health for the wider community.”

The plan also includes a ramp to connect the bridge to the Don Valley trail below, which currently is not as easily accessible. Farrow Partners envisions the Market Bridge to be a connector to other sites in the area, such as the Evergreen Brickworks.

The market would essentially take up half of the bridge that is currently used by cars, reducing five lanes of traffic to three and placing bike lanes on one side of the bridge while the other would be dominated by pedestrians.

Farrow Partners calls the current number of lanes “unprecedented,” as most of Bloor and Danforth is two lanes of traffic, they point out, and said it has turned the bridge to essentially an “expressway.”

The idea of bridge markets is not new. Famous examples include the Rialto Bridge in Venice, Italy, or the Galata Bridge in Istanbul, Turkey.

Farrow Partners hopes to test out the idea during a “summer pilot project” and create a report that can then be examined by the city council. They are currently in talks with Brickworks about a potential partnership.