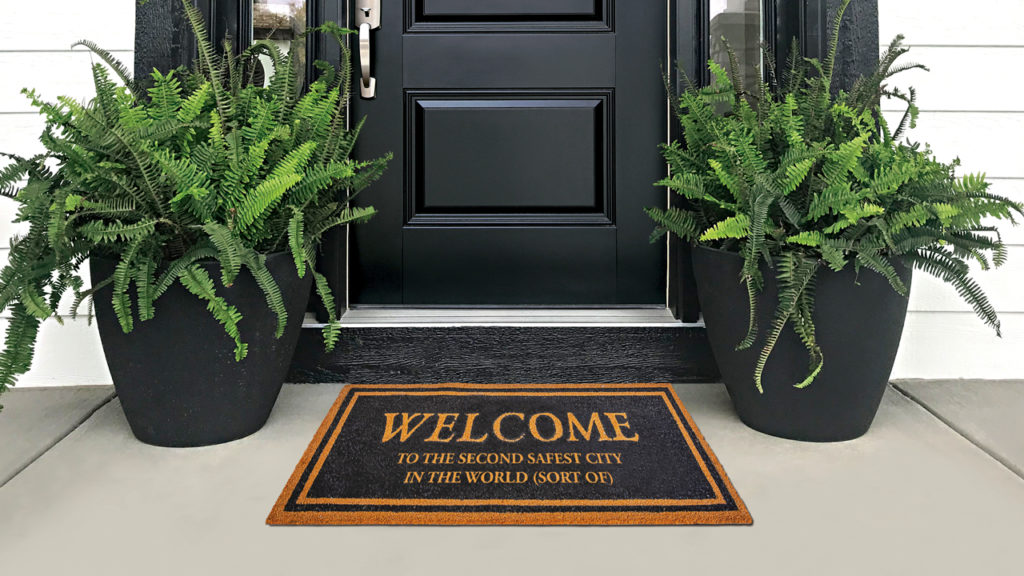 Toronto, as it turns out, is pretty darn safe when it comes to crime, for a massive urban centre, far out-pacing many other big cities around the world. Recently, crime has dropped in many areas including break-ins and robberies, but there is an ongoing issue with both homicides and car thefts.

In our annual crime report, we look at the city’s global ranking, as well as a few troublesome indicators in addition to adding some insight and entertainment from organized crime expert Peter Edwards and true-crime podcaster David Ridgen.

About Toronto’s second safest city in the world ranking

The Intelligence Unit of the Economist magazine released the fourth edition of its research project The Safe Cities Index 2021. The findings rank 60 cities on 76 markers based on digital, health, infrastructure, personal and environmental safety.

Toronto ranks second in the world after Copenhagen. The city scored 82.2 points out of 100, a close runner-up to Copenhagen’s 82.4 points. Toronto, Amsterdam, Melbourne and Sydney, year after year, figure among the top 10.

World cities are graded by five pillars of safety — digital security, health security, infrastructure security and environmental security — that are defined by indicators such as privacy policy, universal health-care coverage, hazard monitoring, threats to personal safety such as military conflict or civil unrest and a sustainability master plan.

“There is an increasing whole-of-city approach to safety. One thing we learned during the pandemic is that you can do your most effective job, by far, if everybody is involved in safety — in particular grassroots community organisations,” Mayor John Tory stated in the Safe Cities Index report.

Toronto placed seventh in health security with 80.0 points. The city also performed notably well in the categories infrastructure security and environmental security, in which the city ranked fourth and second. Toronto comes in at 14 in digital security, after Sydney, Singapore, Los Angeles and more. —Tara Monfaredi According to Toronto Police Service (TPS), in the evening hours of Oct. 21, a man suffering from gunshot wounds was located in the parking lot of a plaza near Highway 401 and Morningside Drive. It’s an area where there is a popular cinema as well as an LCBO store amongst other amenities.

Although TPS offices arrived on the scene and performed life-saving measures before the victim was transported to a local hospital, the victim was pronounced deceased.
Craig Macdonald, 43, was identified as the city’s 66th homicide.

TPS crime stats indicate homicides in the city of Toronto are up 10 per cent and quickly approaching the 71 murders on record in 2020 with two months left of the year. —RJ Police units across the GTA are establishing safe zones for residents to safely exchange goods when buying or selling to someone met online.

The zones have been established to curb the chance of theft or fraud and are monitored by surveillance cameras. Typically, the zones are set up in the parking lots of police stations in the GTA.

Some participating police services include Vaughan, Peel and Halton — the latter only establishing their buy and sell exchange zone late this summer.

One of the first police forces to pioneer the system was Peel Regional Police. Running at each Peel Police facility in Mississauga and Brampton, the zones are used widely by those seeking to safely sell to people they meet online.

According to Const. Akhil Mooken, the exchange zones are utilized by members of the community and have generally been very successful among residents in Peel. “It has worked tremendously for us,” he said. He added that sometimes buyers and sellers can be victims of fraud when participating in transactions from online sales even at regular public exchange locations such as a coffee shop.

“There were some unfortunate incidents where people were victims of a crime as a result of people trying to steal their property, not pay, whatever the case may be,” said Mooken. “So we set these up as a solution to try and alleviate those types of issues.”

He said that the vast majority of these sales do not usually end up in fraud but that the zones provide extra safety to avoid any misconduct. But there’s one crime that Const. Mooken said occurs more often than others: the buying and selling of cellphones.

He added that people are being victimized less and less as word gets around about the police-run zones.

“The police facilities always have police officers in them, 24/7,” he said. “We have had no incidents, so it’s clearly a safe place for people to do their transactions.” —Keena Alwahaidi

You could say Peter Edwards is so knowledgeable about organized crime in Canada that he could author an encyclopedia on the subject matter, and he did just that in 2012, teaming up with Michel Auger to pen a book that looked at everyone from Captain Kidd to Mom Boucher.

He’s also been a reporter with the crime, courts and justice team at the Toronto Star for the last 30 years and has authored 16 books, most of them bestsellers with a few even adapted for the small screen.

And sure, writing about Canada’s deadliest Mafia families, Hells Angels, gangsters and superspies might be a little dangerous, but Peter takes it all with ease.

“Growing up in the small [250 residents] village of Lytton, B.C., I never thought that anyone was ever going to do anything all that bad to me and I sort of just kept that feeling,” he said. Well, there was that one time a razor blade showed up at the Toronto Star Building after Edwards had written about an illegal business that cost a big mafia family a government grant. Not frightening at all.

His latest offering, The Wolfpack: The Millennial Mobsters Who Brought Chaos and Cartels to the Canadian Underworld, which he co-authored with Mexican journalist, Luis Nájera, is a fascinating read about an alliance of young gangsters who are far different than their predecessors: multi-ethnic and more educated, this tech-savvy association is impulsive and has a sense of entitlement.

“They connect through the Internet and not geography, and there’s a very strong Ontario, B.C. and Quebec presence,” said Edwards. “When you see most of the world through a screen, it’s easier to stay anonymous, which is very hard for the police to fight.”

Back in 2012, the Wolfpack Alliance made headlines when its members were involved in the execution-style murder of Johnny Raposo at the Sicilian Sidewalk Café on College Street in Toronto. Since then, the group has continued to wreak havoc across the country as well as overseas with some members found (alive or dead) as far away as Columbia, Germany and Greece.

“There’s a hitman in the Wolfpack who is just a bored kid from the Toronto suburbs,” said Edwards. “Back in the ’80s, Mafia homes were quite modest, but now they want to live like rock stars.”

Although the police have picked off some of the smartest and most dangerous members, and rivals have picked off many more, Edwards believes that the Wolfpack is the model for a new generation of mobsters, one that ignores borders, is Internet driven and is very good with encryption.

“In the past, police would try and dry up their money, but how do you do that today when money can be transferred so quickly.”

On a personal level, what Edwards said what he would like to see come from the book is more money going into drug treatment.

“We wrote this book during the pandemic, and I thought (rather naively) that since the borders were shut down, the drugs would just stop, and the addicts would have time to get their lives under control,” he said. “And that just didn’t happen. These guys are too good at what they do.” —Jennifer Schembri

True crime podcasting continues to prove not only popular, but at times effective. For instance, Toronto’s David Ridgen has helmed numerous investigations for CBC-TV news segments, and for the past several years, via podcasting.

His latest project is the CBC podcast The Next Call. The format has Ridgen unspool cold cases through good, old-fashioned phone calls from one person to the next. The first season, an investigation into the 25-year-old disappearance of Ontario woman Melanie Ethier has produced numerous tips to the police, including one that had the OPP combing through a wooded area looking for evidence just last month.

“When COVID came along, it kind of offered the perfect moment to pitch the idea [for The Next Call] because everybody was on the phone anyway,” said Ridgen. “I think people have now become more open on the phone. So it’s been quite successful on that front in the first season.”

Although Ridgen doesn’t refer to The Next Call as true crime, he said he understands the enduring popularity of the genre and the benefits of social media when it comes to cold cases. But it’s a double-edged sword.

“I think that there can be benefits to social media involvement, that sort of citizen sleuth business and people getting out and trying to solve cases on their own,” he explained. “But sometimes it can get in the way of things too. It can lead to false leads, false tips.”

For season two of The Next Call, Ridgen will investigate the 2002 murder of Terrie Ann Dauphinais, a Métis, 24-year-old mother of three young children.

He said the rewards for his work come in a lot of unexpected places.

“I find rewards in lots of places in all the cases I’ve worked on, from the relationships with the family members to the courage that I’ve seen in people coming forward and speaking the truth that they know,” he said. “Watching somebody who was afraid to talk immediately sort of open up and seem to see the life change happening in them as they talk to me.”

Season two of the The Next Call premieres on Nov. 9. —Ron Johnson