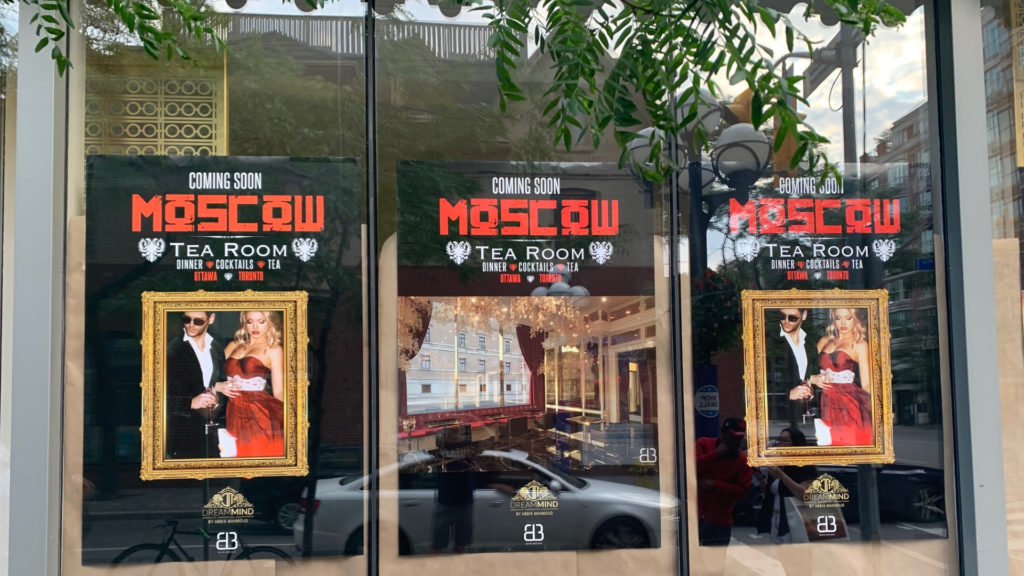 UPDATE: The first Russian tea room in Toronto will be no more. The team behind the Yorkville space announced that Moscow Tea Room is permanently closing on April 24, and will rebrand. Removing all traces of Russia (as the Toronto bar opened during the pandemic and just before Russia attacked Ukraine) is the key message from the operating group. The bar will become JOI on Avenue.

Moscow Tea Room is moving in at 161 Yorkville Ave. The location is the second of its kind in Canada, with the original Moscow Tea Room located in Byward Market in Ottawa. Toronto’s tea room is projected to open by mid-August, though a representative from the company couldn’t confirm an exact date.

The original tea room has a long history of hosting all kinds of high-profile guests, including federal ministers, mayors and entertainment industry moguls. The new location in Yorkville is likely to attract a similar clientele.

Abbis Mahmoud, the mastermind behind Moscow Tea Room, previously launched other well-known venues in the city, including Orchid Nightclub, Tequila Jacks, the Brunswick House and Lobby.

Toronto’s Moscow Tea Room will be filling a hole in the market left behind by location’s previous occupants, Sorelle and Co., which offered an allergen-free high tea service and closed its doors in 2018. The spot has been vacant since then.

The Russian-style tea room in Ottawa offers an elevated menu of appetizers, seafood, champagne and more, including fresh oysters, braised short ribs and the Moscow special: a seafood platter for $90 including Atlantic lobster, shrimp cocktail, mixed sashimi and salmon tartare. Ilon Tyan, director of marketing with Dreammind Group, the team behind the new launch, says the Toronto location will offer high tea, dinner and late night menu options to choose from.

Tyan says the design is inspired by Russian opulence, art and adventure. “This is a true four wall experience venue, as if you have just stepped foot into a private salon of Russian royalty.”

Toronto’s tea room follows in the footsteps of the iconic Russian Tea Room in New York City. The restaurant has been around for over 90 years, and is a globally-renowned institution in the city famous for its luxe décor and fine dining.

“Yorkville is one of the most prestigious locations possibly in the country, a perfect home for this elegant and breathtaking concept,” Tyan says.