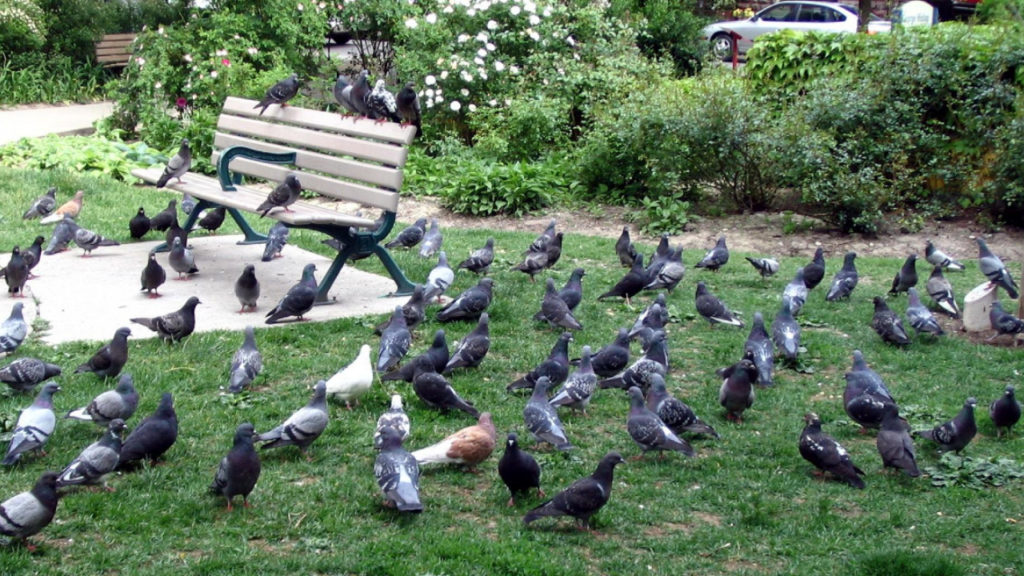 Toronto might just match New York City’s reputation for sharing the streets with an abundance of pests—only our “pests” roam a little higher than NYC’s vermin. Dubbed “rats with wings,” pigeons have started overpopulating the city: they waddle around Bathurst Station, they scavenge for crumbs in Queen’s Park, and they drop their feces on just about every balcony in the city. And yet, despite their poor reputation, it’s easy to forget they’re there because there’s just so many of them.

It begs the question, does Toronto have a pigeon overpopulation problem?

According to Rui Ismail, it undoubtedly does. Ismail is the CEO of VPRS Toronto, a leading wildlife and bird control service in the city. He cites pigeon problems as accounting for 99 per cent of his business, which doubles in size each year.

“We’re starting to see them in buildings where we haven’t seen them before,” Ismail says. “They’re not new buildings or new complexes. The population is just expanding.”

Most of Ismail’s work comes from pigeon complaints in residential condominiums where the balconies and construction areas make for a prime nesting location. “It’s a perfect habitat for them because they’re able to enclose themselves from the bad weather and hop on the railings to see their enemies and food sources,” says Ismail.

Additionally, populations continue to grow because the few predators that pigeons have, like the peregrine falcon, are not very common and only feast on one pigeon every few days.

And this pigeon overpopulation doesn’t just exist in Toronto. Ismail has been getting more and more calls from beyond the GTA to as far as Hamilton and London.

Pigeon populations have been a major discussion point this summer after Ward 13 Councillor Kristyn Wong-Tam put forward a motion to ban bird feeding in both public and private spaces in the city. Current bylaws prohibit people from feeding wildlife in a city park, though there are no further restrictions on spaces outside of parks.

The motion outlines several concerns with public bird feeding, stating that it causes an interference of enjoyment in a public space, the attraction of unwanted wildlife and vermin, and property damage and unsanitary conditions due to droppings.

“Every single bird is going to suffer from this,” says Erika Wilson, pigeon rehabber at The Pigeon Nest, a rescue and rehab she founded.

While the motion only aims to control pigeon populations, Wilson states that it will be hard to feed one type of bird and shoo another away. She’s already seen the repercussions and effects on other species just with the cut back in public bird feeding in anticipation of the ban.

“[This motion] is not the solution.”

Erika helped start a petition fighting against the ban. In the petition, she lists the reasons the ban would harm all bird types and alter the ecosystem. She states that pigeons are domestic—not wild—animals and are even labelled as feral pigeons, city pigeons, or street pigeons.

“In the wintertime, pigeons rely one hundred percent on humans to feed them,” she says. “Because there’s no food, there’s snow, it’s cold, everything is dead, and they don’t eat berries. So, they cannot live without us.”

And it’s not just the livelihood of the birds that would be impacted by the ban – humans would suffer as well. As explained in Wilson’s petition, many people take up bird feeding for religious and spiritual beliefs and banning bird feeding would criminalize and discriminate against these groups.

Bird feeding has also proved to be good for mental health—as seen throughout the pandemic—and for seniors suffering from memory loss and dementia.

Preventative measures will keep pigeons from coming back

Ismail explains that restricting pigeon feeding wouldn’t even cause a drastic change in pigeon population. “People have this idea that pigeons reside in areas because people feed them,” he says. “There’s some truth to it, but it’s not going to keep them away.”

Ismail recommends that the best way to get pigeons off your property and out of your balconies is to discourage the birds from nesting. “Anything you see that’s going to be built up to be a nest, get rid of it. Get rid of anything that you see outside on your balcony that’s going to comfort them, including furniture, food, water.”

Then you can apply the preventative measures in place, like the nets VPRS Toronto installs. For Ismail, it’s the responsibility of property managers to control the exteriors of their buildings in the way that they would eliminate cockroaches and rats within the buildings, and yet many don’t take the necessary preventative measures.

“I think educating the public and educating the property management about the pests and the force of prevention is a way of getting rid of the actual birds.”

As for the public areas in the city, Wilson suggests the artificial breeding facilities (ABFs) that are used to control dove populations in Europe. These ABFs are loft-type and dovecote facilities that encourage the birds to breed. Once the hens have laid eggs, they are removed and replaced with dummy eggs so as not to encourage more egg laying.

“We don’t want to remove [the pigeons]. We want to reduce them,” says Wilson. “They’re part of our city. In the places where they’re heavily populated and there’s a problem, we can control their populations without harming the entire ecosystem, and without stopping people from feeding their birds.”

“We should try other solutions in reducing populations first before killing off thousands of animals with starvation and harming a lot of humans in the process. Let’s just try.”