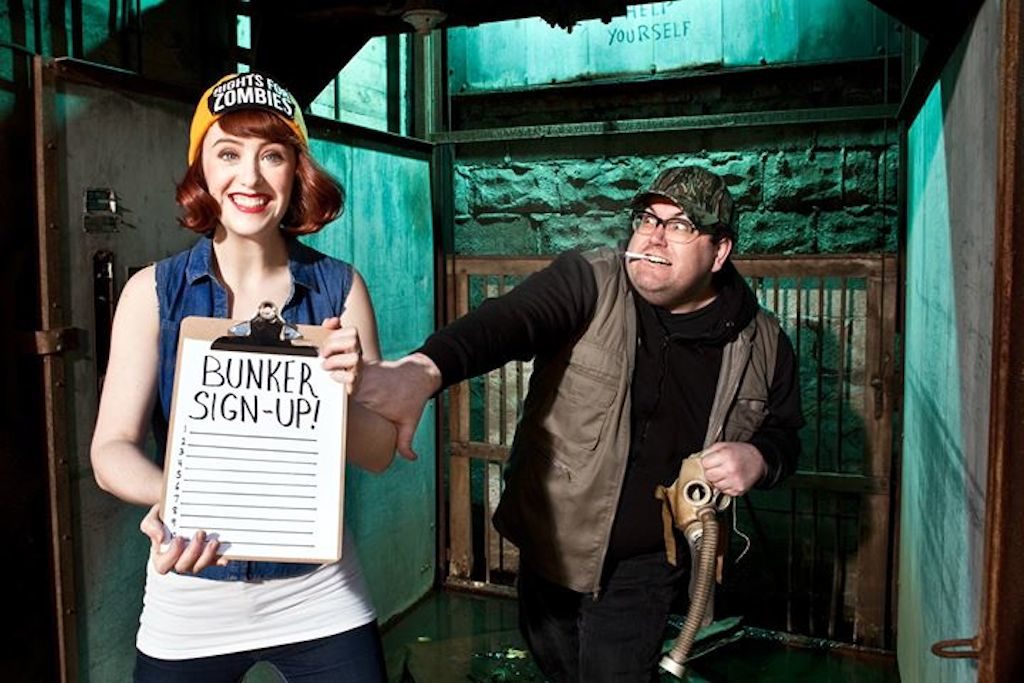 There’s big changes afoot this year for the 29th edition of the Toronto Fringe Festival, July 5 to 16. The most obvious one is a locale change for the festival hub. With Honest Ed’s being demolished, the Fringe has moved to the southeast corner of Bathurst and Dundas where there’s lots of free programming daily (and nightly, especially nightly) at the hub. It’s also where you’ll find a discount ticket booth for the festival’s 160 shows, the most ever. There is a dizzying amount of entertainment, so we’ve done our best to narrow it down.­­

There are rock stars on the Fringe circuit—performers who have honed and perfected their idiosyncratic brand of entertainment, and pack audiences in across Canada, and beyond. These include Vancouver's Peter n' Chris, who are tackling A Chris-tmas Carol; English clowns James and James with In The Dark; and Vancouver-based shadow puppeteers Mind Of A Snail in Multiple Organism. But our pick in this category goes to Toronto's own The Templeton Philharmonic, the comedic duo who are mucking about with history in their new hour-long  About Time.

Some of the more intriguing shows at the festival take place in unorthodox places — bars, libraries, parks, etc. Pressgang Theatre is staging No Place, about a woman at her grandmother’s funeral, at a church; Adam Bailey’s Parisian tale The Life Henri is at a French school. But we can’t pass up a Sex T-Rex show, and this year, the company is in a pub with puppets in Bendy Sign Tavern.

Second time is the charm

By this, we mean you could see a show that's been a hit in Toronto before. Sam Mullins performed his storytelling show Weaksauce at a tiny venue in 2013; since the latest iteration won a Canadian Comedy Award, he's back with it in a larger venue. Fellow storyteller and Fringe vet Martin Dockery is back with his Delirium; James Gangl's Cruise Control, which had a too-short run at Second City, is back, too; and the TTC Transit cop comedy Special Constables is back with some original cast members—and a few new ones.

Musicals and the Fringe go hand in hand. This year, there’s large-scale musicals such as Seeking Refuge, the winner of the Fringe’s Paul O’Sullivan Prize for new musical theatre; songs for all ages in Jay and Shilo’s Sibling Rivalry and even a run of The Confidential Musical Theatre Project, where the cast tackles a new musical for each show with only an hour’s notice beforehand. But the song and dance show we most want to see is Maddie’s Karaoke Birthday Party, which boasts stellar singers such as Kelly Holiff and Joseph Zita.

Comedians can also punch above their usual weight during the Fringe Festival, where improvisers and comics can suddenly find their houses packed as word of mouth spreads. Veteran comics the Coincidence Men are mashing up two popular properties for Shakespeare's Ghostbusters; crack improv duo Chad Mallett are holding court on the Factory main stage; and Bad Dog Theatre is focused on the kids this year, with Animated! The sketch troupe Dame Judi Dench, who've produced a series of strong Fringe specials, isn't at this year's festival by that name—but several of their members are part of a cast that's challenged themselves to perform 32 Short Sketches About Bees.

Yes, you should try and see some of the stellar talent from out of town. Vancouver comic Graham Clark has played with reading the phone book and using Instagram in previous shows, and this time around, he says he won’t even be onstage for his show in the aptly titled Graham Clark's Not Here. New Zealand’s Penny Ashton had a hit with Promise and Promiscuity last summer and this year tackles Dickens in Olive Copperbottom. We’re most excited for the return of Gemma Wilcox, a 19-time Best of Fringe winner absent from the festival for years. She’s back with Magical Mystery Detour.

You may or may not become part of the show at the Fringe, and some shows suggest that participation will be encouraged. Audiences will be briefed on the apocalypse in Welcome to the Bunker!; introduced to a variety of talking Toronto wildlife in High Park Noir; and entertained kitchen-party style by The Diddlin’ Bibbles Live in Concert.

This is the category of Fringe show that's most widely mocked outside of the festival, and while we've seen our fair share of painfully bad ones, there's exceptionally entertaining people who write and perform them, too; folks like Ingrid Hansen's Interstellar Elder, Rhiannon Archer's Life Records 2: Side B and Joanne O'Sullivan in She Grew Funny. We're especially curious about Bad Baby Presents: Rules Control The Fun, featuring playwright and actor Janella Hanna, a Fringe veteran, deconstructing the festival (and solo shows) in clown character.

Watch something with legs

By this, we mean “hoofers” — throw a little bit of dance in the mix. Robin Henderson, a choreographer who specializes in teaching comedians to move, returns with Pineapple Club; and the True North Mix Tape features a cast of triple threat teens working off of Canadian pop standards.

For serious
Comedy and music are audience favourites in most Fringe shows, but there are always a few new written dramas (or dramedies?) that may impress with more subtle artistry. Rose Napoli’s Ten Creative Ways to Dispose of Your Cremains features herself and Jakob Ehman in a “millennial love letter to the Peter Pans of the world”; the Howland Company’s Ruth Goodwin and James Graham are producing and starring in Sam Steiner’s Lemons Lemons Lemons Lemons Lemons; and Tanisha Taitt’s The Seat Next to the King won the Fringe’s New Play Contest.