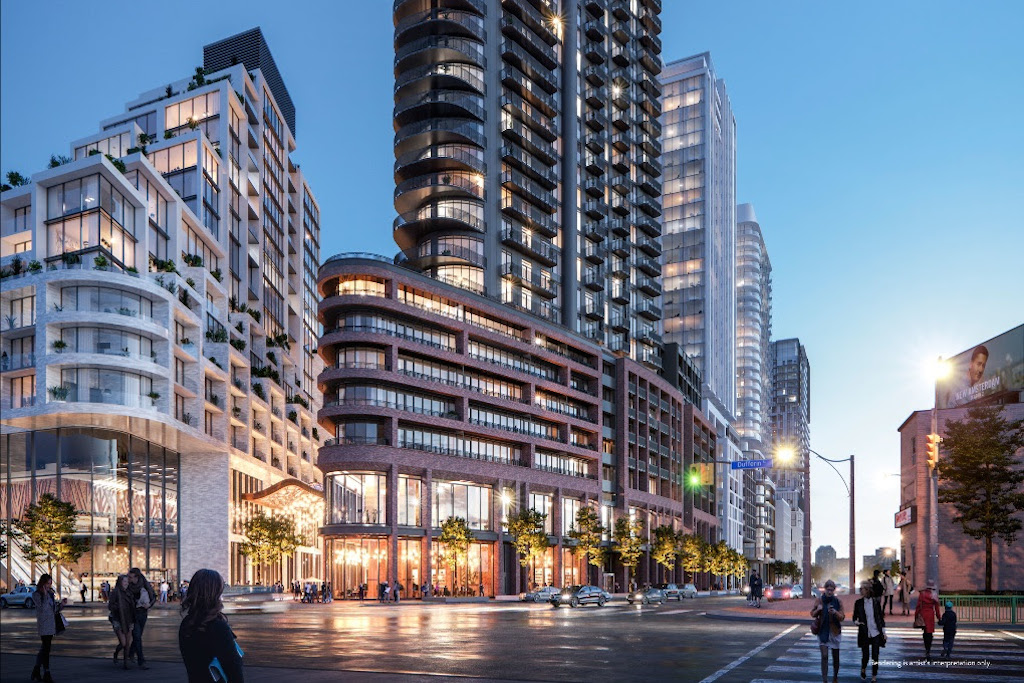 A third condominium has been revealed for the Galleria on the Park super-development at Dufferin and Dupont. The dramatic tower features a flatiron design in a nod to the area’s unique industrial heritage.

Flatiron buildings are characterized by their distinctive triangular shape. The most prominent of the species was constructed in New York City at the corner of Fifth Avenue and Broadway Avenue in 1902.

Galleria III was announced Monday and features a flatiron design by Hariri Pontarini Architects (HPA) that “pays homage to the area’s unique industrial heritage,” according to a statement.

At 31 storeys, the flatiron building is the tallest of the three planned residential buildings — Galleria I and Galleria II stand at 29 and 24 storeys respectively.

In total, the three condominiums will host up to 2,900 residents. Galleria III, for its part, has 426 condo units ranging from studios up to three-bedroom units. Units have already sold out for Galleria 01.

According to developer ELAD Canada, Galleria III will act as the entryway to the master-planned community that includes a new eight-acre city park, a revamped Wallace Emerson community centre and up to 300,000 square feet of retail space.

“Rising at the entrance of Galleria on the Park, Galleria III will become the new landmark building for not only our community but for the West End,” ELAD Canada CEO Rafael Lazer said in a statement. “This marks an exciting new chapter for Toronto’s cityscape.”

The flatiron building features a red-brick two-storey podium for retail, and above it a wellness amenities floor that includes a fitness centre with a yoga and meditation room. Further up the tower on the 11th floor is a dedicated social area with a lounge, plus a pool and barbeques outside. A coworking space in the building will also allow residents to work from home, while not exactly at home.

Construction has already begun for the eight-building Galleria on the Park in August. It will open in phases, beginning with Phase I which includes Galleria I and the new Wallace Emerson Community Centre. The 21,000 meters squared project is replacing the Galleria Shopping Centre that opened in 1972 and has been partly demolished.