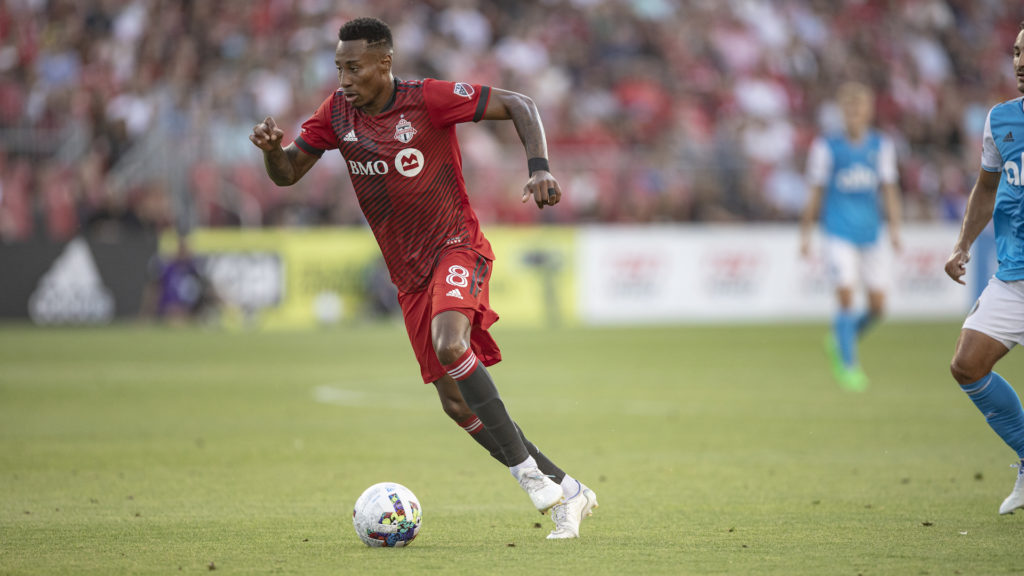 Congratulations are due. It’s been nearly 40 years since Canada competed in the FIFA Men’s World Cup, and the fans can’t stop raving about it. Mark-Anthony Kaye, the Canadian men’s national team midfielder and recent Toronto FC addition, accepts the enthusiastic “Congrats!” gratefully.

A team player, he immediately recognizes the collective effort it took to get the team to this point: “There’s been a lot of us who have been on this journey, sacrificing and working hard to get this far.”

The road to the World Cup is never easy, and the COVID-19 pandemic was an added obstacle to an already difficult feat.

“Mentally, it was definitely exhausting because of the amount of time we’re travelling, being away from family in an isolated location,” he says.

Despite these difficulties, Kaye and his teammates have been able to rise above them. “The pandemic definitely made athletes more resilient. We’re very fortunate [to be] in the situations we’re in, with people whose jobs are to make sure we have everything we need,” he says.

A graduate of Lawrence Park Collegiate Institute, Kaye played for a number of clubs in the GTA, starting at Wexford, when he was nine, then moving to Ajax Soccer Club and later Glen Shields. After spending a year on York University’s varsity soccer team, Kaye was invited to play at TFC Academy. After spending a couple of years balancing both his commitments to York and TFC, Kaye decided to go pro, feeling as though it was “the right move to focus on that.”

Over the span of his career, Kaye has played for the Louisville City and Los Angeles football clubs. After a short stint in Denver, Kaye has returned home to play for the Toronto FC.

“I feel like I got a little bit from each place that I’ve lived in and it’s allowed me to be comfortable wherever I am, wherever I go,” he says.

For many sports, not coming from a particularly wealthy and often white background presents systemic challenges for those hoping to go pro. Kaye says he’s seen that difference as well.

“Privilege gives you more opportunities at a younger age, which sometimes can be the deciding factor for whether or not you’ve got a certain amount of professional training hours from the best team or coaches,” He says. He notes that, since he’s gone pro, “The soccer system in Canada, especially in Toronto, has done a much better job to bridge that gap that so many people see, such as financial hardship, that stops young players from getting opportunities.”

That being said, he believes that determined and motivated players will find a way to achieve the success they desire.

“You can’t be too hard on yourself when an opportunity doesn’t go your way, especially because it allows you to become more resilient, ” he says.

Although Kaye’s career has only just begun, having a World Cup qualification under his belt is something few Canadian players can claim.

“It hasn’t been done in so long, and [head coach] John [Herdman] got a great group of guys together for this mission,” he says.

The excitement is high and still mounting leading up to the Nov. 20 World Cup kick off. (Canada’s team plays its first game on Nov. 23 against Belgium.)

“I’m glad we’ve made people happy, especially considering everything that’s gone on the last couple of years. I think it brings a newfound hope and positivity to the country,” he says.