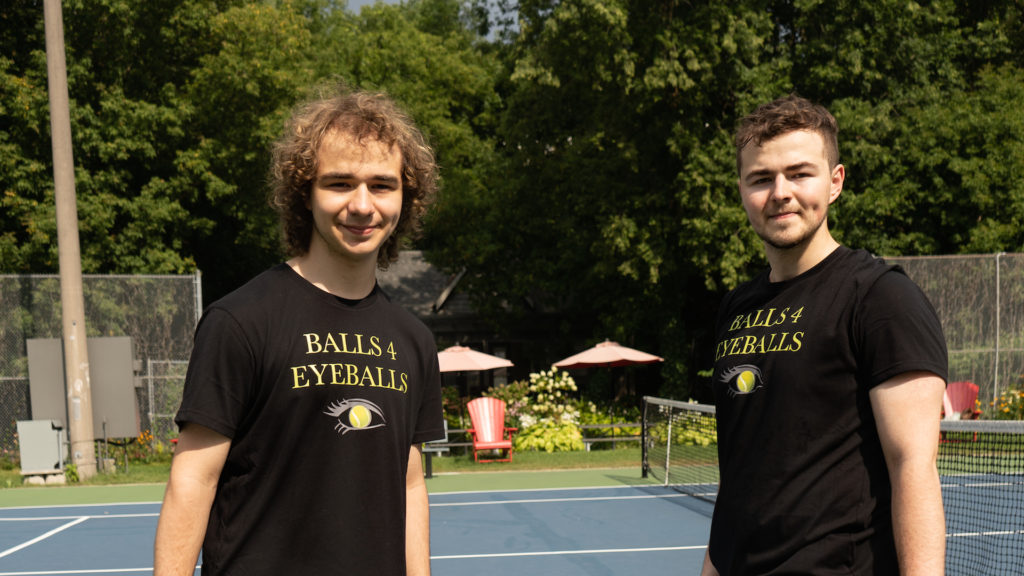 Both brothers have been playing tennis since they were kids. They experienced firsthand that most tennis players use new balls each time they play and toss them out after using them only once. As a result, those tennis balls end up in landfills, taking over 400 years to decompose, Cooper Waisberg, who is 19, said.

In June of this year, the brothers started  Balls 4 Eyeballs, an organization that recycles tennis balls while raising money for eye research in Canada.

The older brother, Ethan Waisberg, 20, is a fifth-year medical student in a direct entry, six-year program at the University College Dublin in Ireland. He said he participated in eye research projects with organizations such as Medical Ministry International.

“I’ve done my research myself as a medical student. I notice how little funding there is for eye research in Canada,” Waisberg said.” So seeing if we can improve the [number] of dollars in funding in Canada, that can make a big difference.”

To collect the balls, the organization places collection bins at no charge in tennis clubs across Canada. The balls are then sanitized with UV light and are put up for sale on the website, Cooper Waisberg, who is 19, said. The proceeds will be donated to Canadian eye charities like Fighting Blindness Canada, Orbis Canada, and Medical Ministry International.

Although they haven’t made any sales, Cooper Waisberg said they’ve reached “a milestone” in collecting about 30,000 used tennis balls.

“We’re still figuring out the logistics of how we’re going to sell our tennis balls, but if anyone’s interested, they can visit our website, where they can email us at info@balls4eyeballs.org.,” Waisberg said.

The brothers said they hope to encourage tennis players to reuse or repurpose their balls rather than throwing them away. Tennis balls can be used as cushions in boxes to absorb shock or placed on chair legs to prevent scratches on floors, according to a blog on the organization’s website.

Balls 4 Eyeballs has already partnered up with over ten tennis clubs across the province including Total Tennis London and Leaside Tennis Club.

“We aspire to be a youth-led movement across Canada, much bigger than us, with a purpose of reusing tennis balls to help save the environment, while funding important eye research,” Ethan Waisberg said.