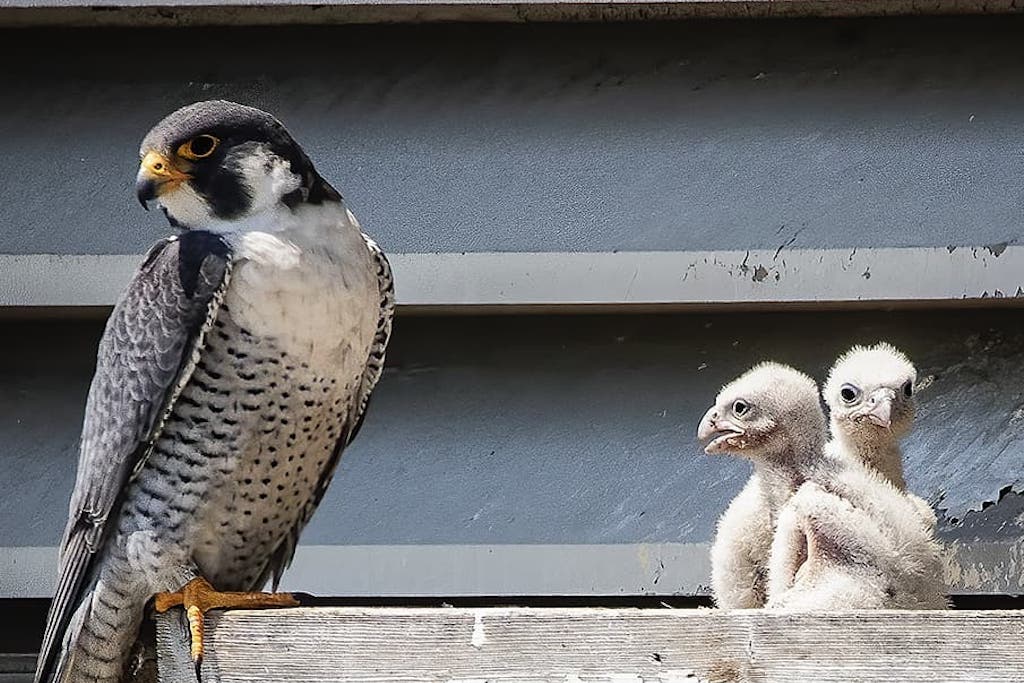 Two baby peregrines hatched earlier this month at a well-known nesting spot at Bloor and Islington, and the building’s management team is looking to the community to help name them.

Bloor Islington Place has opened up its Instagram for gender-neutral submissions, and they are accepting names for adorable fledglings until Friday.

The fledglings have a very eventful week ahead of them, and on May 25, their weight, sex, and names will be announced during the banding process.

A member of the Canadian Peregrine Foundation will scale the building with the help of Skyreach Window Cleaning and take the two fledglings from their nest to place a band on each of the fledgling’s ankles before returning them.

The banding process is an international protocol that allows conservationists to track the formerly endangered falcons’ life span, birth rate and migration patterns.

The former Sun Life Financial Centre building at Bloor and Islington has been a nesting site for peregrine falcon mates since 1997, and in those 27 years, 91 fledglings have been born at the site.

The two fledglings born on May 3 bring the new headcount to 93.

Peregrine falcons were nearly extinct in Ontario in the ’60s from a widely used pesticide called DDT which poisoned the falcons’ food source.

Since then, the species has slowly recovered with the help of conservation groups like the Canadian Peregrine Foundation.

The fledglings’ mother D’arcy and father Lucky, are the current mated pair and the sixth mated pair to nest at the Bloor and Islington site.

According to Frieda Lauw, tenant engagement services coordinator at Bloor Islington Place, the banding of the fledglings has become an annual event that many in the community look forward to.

“Every year, we know the fledglings are coming around May, June, and we start looking for the nest. There are some occupants in our building who are full-time watchers, and they have the 24-hour webcam on at all times.”

Unlike previous years the public won’t be able to gather and view the banding due to COVID-19 but they will be able to watch footage of the event afterwards.

The Bloor Islington Place nest site has the longest-running falcon webcam in North America, which, according to Mark Nash, director at Canadian Peregrine Foundation, has run 24 hours a day and seven days a week since 1997 and has received billions of views over the years.

The urban-dwelling falcons eat pigeons and other small birds and have adapted to thrive in the city’s climate.

Their migration patterns even differ from other adult peregrine falcons that live cliffside, with urban peregrine opting out of migration and bearing through Toronto’s cold winters according to Nash.

The two new fledglings are healthy and doing well so far, but they still have to endure their first flight, which is an equally terrifying and exciting feat.

According to Nash, the fledglings will unwillingly take their first flight at around 36 to 40 days old and plummet down to the ground from their towering nest.

“At around 40 days of age, mother nature mysteriously gives them a kick in the butt and tells them that they gotta fly. They don’t want to, and most of the time, the first flight happens by accident,” says Nash. “They’re blown off when they’re running back and forth on the ledge, and suddenly they’re up like the wind.”

While falling off a towering building may seem deadly, Nash says these fledglings are built for impact and usually drift down slowly and safely.

The real danger comes from the landing in the middle of the road or high traffic areas.

Luckily for them, volunteers from the Canadian Peregrine Foundation will be surrounding the building and 11 other nests in Ontario during ‘Falcon Fledge Watch’ from 5 a.m. to 9 p.m., waiting to scoop the fledglings up in a blanket, inspect them for injuries and return them to their nests.