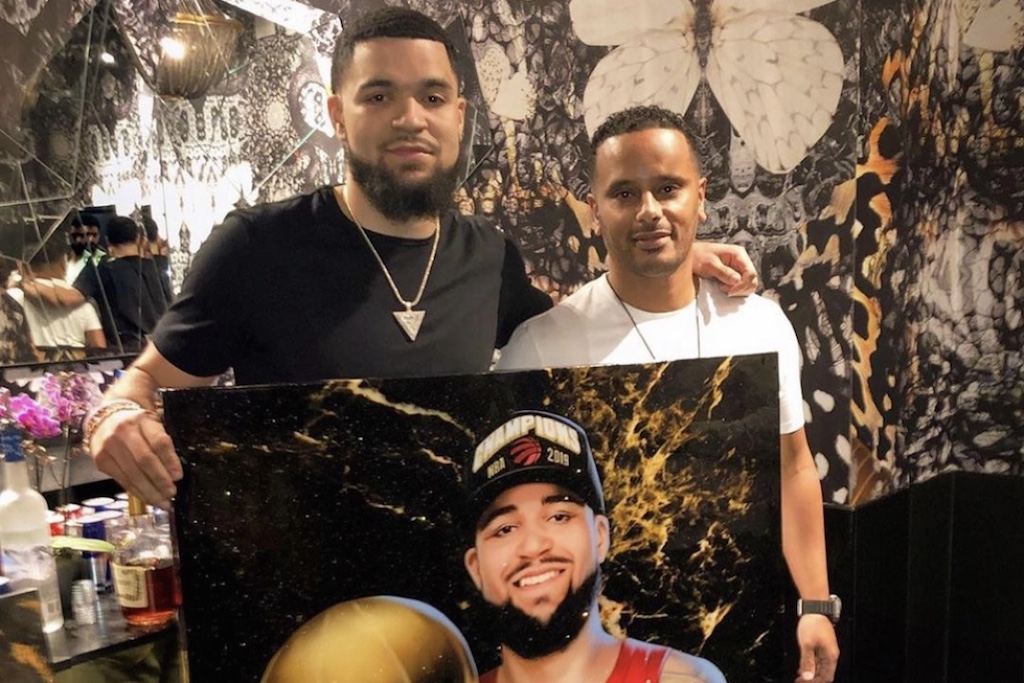 He’s created art for everyone from Drake to Snoop Dogg to Fred VanVleet, but for Toronto artist Amer Sal Mohammed, that trajectory is no surprise.

“I’ve been an artist my entire life, and I knew I’d make it work,” says the artist who grew up in Saudi Arabia and now calls Toronto home.

Mohammed moved to Toronto in 2012, and took art classes by day at Humber College, while paying his way by night as a club promoter. While fine-tuning his graphic design skills, he was also growing a sense for local colour and building a network – one that would eventually land him his first high-profile client in 2019.

“That was Murda Beatz,” says Mohammed. “I worked in the clubs with his manager Cory Litwin for many years. At that point, Cory moved out to L.A. Murda Beatz had a birthday party there, and I made him a special piece. I flew out there to present it to him and, at the event, there were a bunch of celebrities, and I had a ton of business cards with me. My followers and my portfolio started growing from there. It’s because of the network, the network is everything.” Like many creative types, Mohammed made plans to cross the border, with Miami and L.A. feeling particularly promising (and warm). The former, actually, is where he felt his career really took off, at the renowned Art Basel, an international art fair. He recalls borrowing a Lamborghini from a friend who owned a luxury car rental company in the city, and then connecting with a printer who could wrap the car in 10 of his paintings.

“And I made reservations,” he says. “The best restaurants, but I would show up an hour earlier and valet the car right in the front before the event would start. People would walk into the venue and they would see this Lamborghini wrapped with my artwork. And on that Lambo, I had my social media. So when I got back from Miami, my DMs, my phone, my emails exploded. That piece cost me almost $30,000, but it was a great return on investment because it really launched my career. I went from having clients in Toronto to having clients everywhere else in the world.”

But he soon found Miami wasn’t quite the place for him, especially as he’d built a muscle for online networking that he could flex just about anywhere.

“It felt like there was a bigger culture there, but being out there for three to four months, I realized I was a small fish in a big pond,” he says. “In Toronto, I was established, I wasn’t a bigger fish. And I realized this is where I belong when it comes to art. I have always been embraced by the city to do what I love.” Now, as a full-time artist of three years, Mohammed has his own decked-out studio at 32 Fort York Blvd., where his work drapes the walls. And where it quickly becomes noticeable that, for this artist, just about anything can serve as a canvas. And luxury accents only add “more flavour.”

Take, for example, Mohammed’s skateboards. They’re a big ticket item in his portfolio, often emblazoned with fashion brands such as Chanel or Hermes or faces of rappers and other stars.

“I’m always looking for something different to separate myself from other artists and to get ahead of the curve,” he explains. “I was actually in L.A. delivering a piece to The Game when I saw a bunch of skateboards going up a stairwell. And they looked really cool, but there was nothing on them besides their brand name. I thought, what if I wrap these with actual artwork so every piece would look different? When I got back home, I bought a bunch of skateboards and I started practicing on them. The next thing I knew, people loved it. And I love creating things that they want to have on their walls, in their restaurants, in their offices.”

People love much of what Mohammed has to offer. So much so that 90 per cent of his current business is entirely custom artwork. Much of it is also digital, which means he’s able to offer a faster turn-around and make a quicker profit. At the moment, that means he’s churning out 20 to 30 pieces a month.

While that may sound like a hefty workload, Mohammed isn’t sweating it. He says, “It’s zero pressure. I just love what I do.”