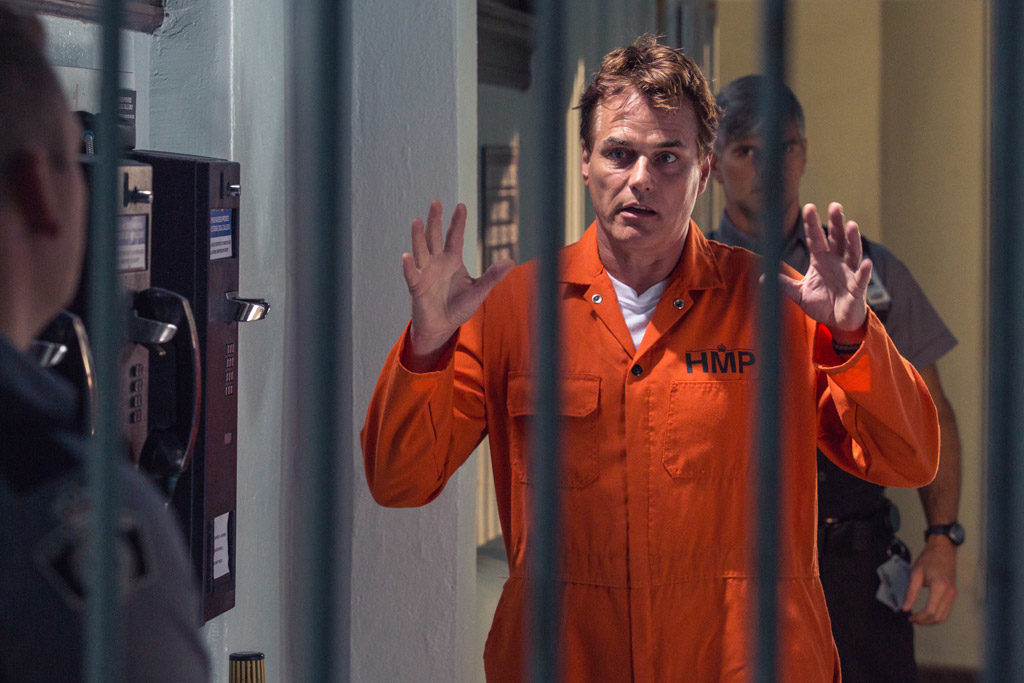 Growing up as an army brat, Toronto resident Paul Gross became accustomed to immersing himself in different social environments at an early age. His ability to shift his persona to fit in with the other kids served him well as an actor known for roles such as the iconic RCMP constable Benton Fraser in Due South, and slightly askew theatre director Geoffrey Tennant in the award-winning series Slings & Arrows.

“It’s kind of common that army brats or corporate brats who move around a lot will become performers at one point or another,” Gross says. “I think that you have to reinvent yourself and redefine yourself for every new environment you move into.”

In his latest role, Gross reinvents himself once again, this time as police detective Roy Patterson on the CBC series Caught, premiering this month.

Based on the novel by Lisa Moore and set in the late 1970s, the show follows an escaped prisoner (played by Allan Hawco) as he runs from the police.

“He’s kind of a shattered guy,” Gross says of his character, Roy. “He has a terrible event in his past that has beaten his soul to pieces, and he’s also not very well. I think he’s on a weird kind of quest for redemption to atone for this event in his past, so he latches on to this particular storyline or this case that relates to his past as a way to correct these wrongs.”

The series was filmed in Newfoundland, Ontario and the Dominican Republic.

According to Gross, the locations couldn’t have been more different in terms of climate, but the contrast made for quite the shooting process.

“It was tremendous to shoot in Newfoundland and then have everybody go down to the Dominican for that portion of the story. It flipped it into a different gear, so it was a lot of fun,” he says.

“It was interesting because it was cold in Newfoundland and even in mid-June it was encased in ice. And then it was like 42 degrees and 100 per cent humidity every single day in the Dominican Republic, and the sweat just poured out of me.”

His army brat upbringing has been one of the larger influences on his acting career, but Gross says his severe dislike for math also led him in the direction of the creative arts.

“I hated math. I wasn’t terrible at it; I just hated doing it. I managed to quit math, and once you quit math, you can’t do anything else, so I had to stay in the arts, and I was totally talentless in every other field, so that’s how I ended up doing acting,” he says. Men with Brooms
It doesn’t get any better than a former (pretend) Mountie in a curling movie alongside the late, great Leslie Nielsen and Molly Parker.

Slings & Arrows
Gross used to work as an usher at the Stratford Festival. He returned later to star in Hamlet. This show pokes great fun at the whole classical theatre festival in a small-town thing.

Gross’s long career in the performing industry has also led to major roles as a producer, writer and director. Most notably, he wrote, directed and starred in the epic First World War drama Passchendaele — the highest grossing Canadian film of 2008 — and more recently, he wrote and directed Hyena Road, another Canadian war drama set in Afghanistan. Gross says his work on these films has been some of the most rewarding of his career.

“I think the best thing about Passchendaele — and to some extent this is happening with Hyena Road as well — is that I’ll get stopped in airports or on the street by somebody who has just seen it and they’ll say, ‘Hey that really meant something to me,’ and that actually matters to me,” he says.

Aside from films, Gross has also been busy at work on several TV series and stage acting in recent years. He’s performed as Hamlet at the Stratford Festival and on Broadway opposite Kim Cattrall in Noel Coward’s Private Lives.

Last year, he appeared in the TV adaptation of Margaret Atwood’s novel Alias Grace. The actor says his versatility as an artist ultimately stems from his main goal of touching audiences with a moving narrative.

Today, Gross mostly lives in New York City, but he’s often travelling back and forth to Toronto, where he’s lived for years with his wife Martha Burns and their two children. While he’s here, he says his work is his main focus and his favourite pastime.

“I just kind of work. I’ll go to films, the theatre, galleries and restaurants and stuff, but I do spend a lot of time working. It’s actually what I like doing more than anything. I don’t have a hobby. I don’t go to clubs,” he says.

Now that shooting for Caught has wrapped, Gross is already jumping into his next project — another TV series set in the world of espionage and surveillance.

He says if everything goes according to schedule, shooting will start next year, and the show should premiere in fall 2018.

“I think acting, writing, directing, they all kind of come from the same place,” he says. “I know it all sounds quite different, but to me, they’re all just part of telling a story and telling a tale, and sometimes it’s easier to write it or act in it, but it’s all kind of the same thing.”

Gross says that although acting onstage versus onscreen may seem like two drastically different mediums, at a basic level, they involve the same muscles.

“They’re different around the periphery, but the actual core of acting is the same. If you’re true on-camera, you’ll be true onstage and vice versa,” he says.

“The great thing about film is the intimacy of it and the extraordinary reality you can have that buoys you up because you’re in the set. In the theatre, it’s much more imaginative in that regard, and of course relating to the live audiences, that’s hard to beat.”