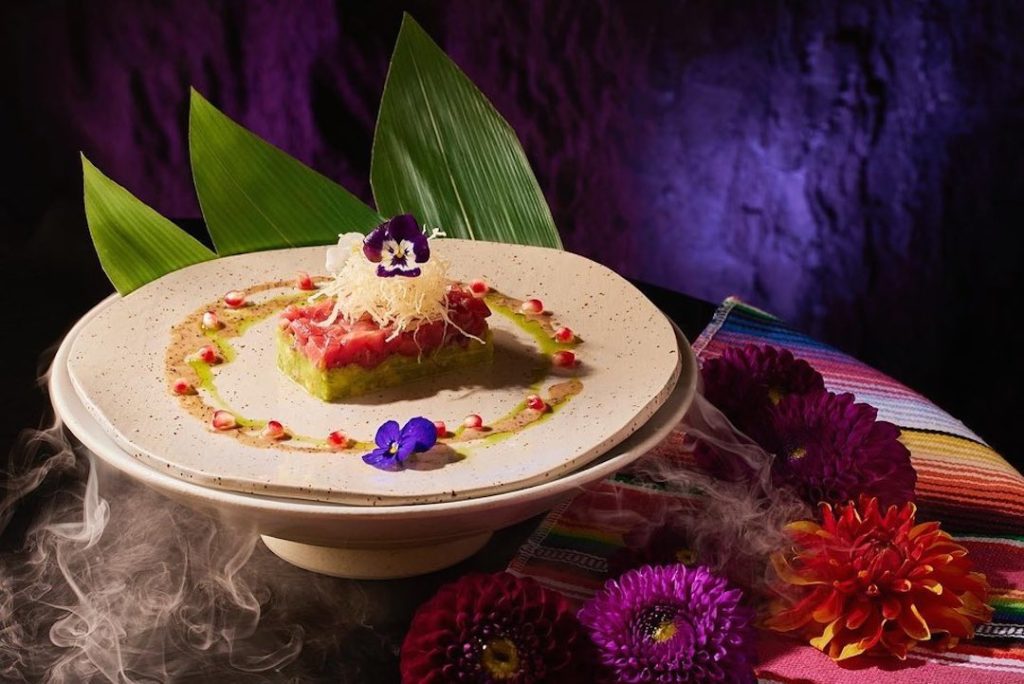 Dia de los Muertos, or Day of the Dead, is a Mexican holiday that’s widely observed in Mexico from Nov. 1 to Nov. 2. While many might recognize it from the colourful painted skulls, the holiday is a celebration that takes place to honour and celebrate the souls of those departed. Here in Toronto, many Mexican eateries and bars are paying tribute to friends and family with a series of special events, including live music, specialty cocktails, and one-day only menu items. Here are our top picks to celebrate Dia de los Muertos in the city.


Raise a glass to those who have passed with the La Paloma De Teresa, a specialty cocktail available today at Añejo. The drink is a subtly sweet and spicy take on the classic Paloma cocktail, made with Patron, and was named after the wife of the late master Patron distiller, Francisco Alcaraz.


Now through Nov. 6, Chotto Matte Toronto will celebrate the return of their highly anticipated Day of the Dead experience, brimming with chef-curated dishes and expertly crafted cocktails. Inspired by the renowned Latin American traditions, guests will be enthralled by a culinary journey that features dishes like tuna tartare, made with premium ingredients avocado, pomegranate, chive oil and truffle salsa; scallop tiradito, made with green apple salsa and aji sesame oil; and a special dessert for the occasion, the Immortal Flame, made with lime mousse cake, hazelnut praline, and toast white chocolate candle.


Chula Taberna Mexicana is having a weekly birria taco special, and is giving away free dessert to mark the occasion! The featured dessert, Creme Catalane, is a take on a creme brulee, seared with a torch and topped with fresh blueberries.


Returning for another year, Colibri’s special “Pan de Muerto” tradition is back! The restaurant’s special snack to celebrate Dia de los Muertos is a cross between traditional Mexican bread and pan dulce, and features a sweet bread sprinkled in sugar, then stuffed with chocolate. You can order yours through the Chefdrop app, or by visiting the restaurant.


Distillery District’s Mexican hotspot, El Catrin, is pulling out all the stops for Day of the Dead, with a live mariachi band, limited edition cocktails made with Tequila Herradura, traditional chef’s features, a photo booth for guests, and music by DJ Rope. The excitement starts at 5 p.m. on Nov. 2 and goes until late. There’s also the chance to win a $250 gift card to any of the Distillery restaurant Corporation’s restaurants.


Cosy Kensington Market eatery El Rey is putting on several food and drink specials to mark Dia de los Muertos, as well as some tasty treats. Try the Pan de Muerto, a homemade sweet bread sprinkled with sugar and stuffed with Mexican chocolate ganache or cinnamon vanilla cream, raspberry and cocoa nibs. To drink, don’t miss the Champurrado, a warm, thick, chocolate drink special to Mexico, usually made from a blend of corn flour and milk. To eat, try the Tacos de Relleno Negro, a regional Yucatan specialty that uses turkey meat seasoned with a dark spiced paste and a hard boiled egg.


Available until the end of the day today (Nov. 2), Fonda Balam has a Dia de los Muertos special: tetela made with blue corn conico from Tlaxcala, filled with maitake mushrooms and cheese, served over a rich mushroom mole.


From Nov. 3 to Nov. 4, plant-based Mexican favourite La Bartola is hosting a Secret Dinner to mark Dia de los Muertos (Day of the Dead). With an atmosphere to match the mood of the evening, guests of La Bartola’s Secret Dinner can expect a six-course dinner, complete with specialty cocktailsWe’re doing a 6-course menu with special drinks. The menu will feature traditional dishes from different regions of Mexico, using seasonal Mexican ingredients, like “Calabaza en Tacha (Candied Pumpkin) made with cinnamon, star anise, piloncillo, cloves and allspice. Food and drinks aside, La Bartola, has also created an altar “which will honour and celebrate the life of friends and family who have passed away,” says owner Ivan Castro. The Secret Dinner costs $60 per person. To RSVP, click here!