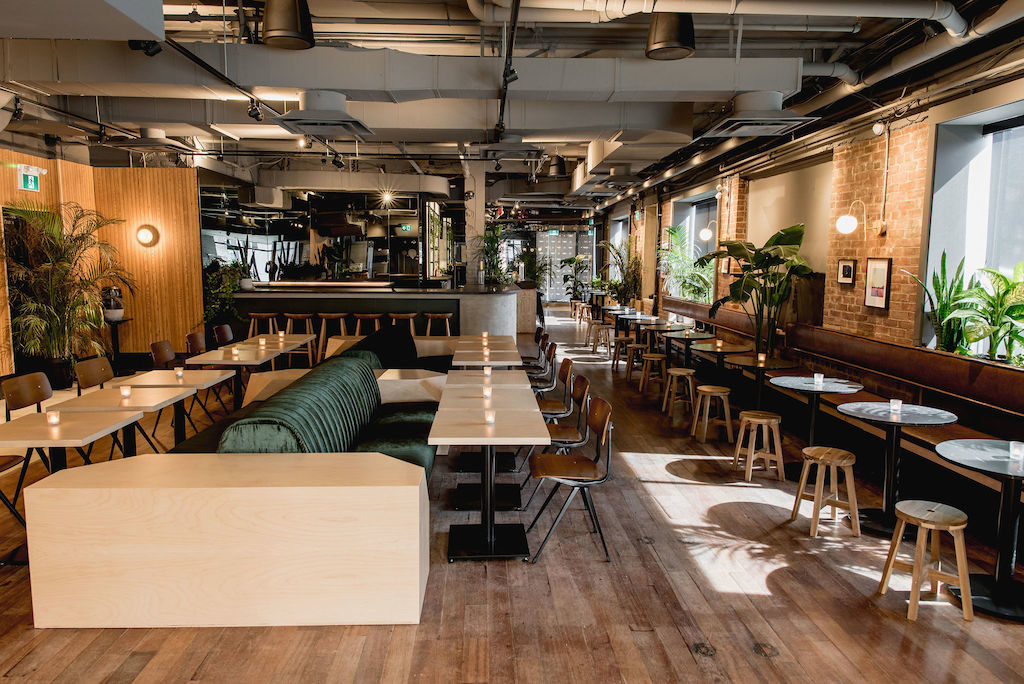 For a long time, unless you were intentionally willing to cough up tourist-level dollars on high tea at the Ritz or a classic steak and cocktail at Morton’s, you’d be more likely to dine outside your hotel, given the choice. After all, hotel restaurants were hotel restaurants: cavernous, empty, expensive and just a little bit generic.

But suddenly in the past year, Toronto’s hotel restaurant scene has blossomed into its own, with diverse and unique approaches, highly attuned to both travelling clientele and the local community.

We visit five of this new breed of haute-hotel purveyors. We think you will be deliciously surprised to check-in to these uber-cool restaurants.

Hotel X has the benefit of being a new hotel without any legacy expectations and one situated to appeal to a lot of tourists — on the Exhibition grounds and close to transit. The 10,000-square-foot restaurant, Pétros82, opened this past September and is led by executive chef Richard Andino.

Although one might not assume that the average business traveller and conference-goer is looking for a taste of the Mediterranean when they come to chilly Toronto, Andino has larger ambitions for his restaurant: 70 per cent of the clientele is local, and even hotel guests, he reasons, are looking for more than just a lobby bar. And there’s a lot more on offer than a typical hotel restaurant, including Maritime rock crab and lobster on the raw bar menu, sharing plates heavily doused with their own specially sourced olives and olive oil, and a few choice Greek recipes totally unaltered from owner Peter Eliopoulos’s mother.

Located squarely in the Entertainment District, Victor Restaurant has been around for 11 years. With a tag line of “Your grandmother’s cooking on steroids,” the restaurant in Le Germain Hotel serves up an impressive array of classic French-inspired dishes, like butter-roasted scallops and a house-ground burger.

Executive chef Lanny MacLeod has been with Victor Restaurant for eight years, and in that time, he’s been able to balance the comfort cravings of business travellers staying at the hotel (which he says accounts for 70 per cent of the restaurant’s clientele) with the needs of local weekend diners, who are looking for a certain wow factor.

“The most important attribute a hotel restaurant should have is flexibility,” he says. “As a hotel chef, I never speak about ‘the integrity of my dishes’ or say ‘the chef suggests you have it this way’ because when it comes down to it, I’m here to serve our guests what they need, not to flatter my own ego.” So although you may not find activated charcoal or beef jus foam on the menu, what you do get is a soul-warming variety of elevated homestyle plates, elegantly plated and appealing to both visitors and special-occasion diners.

The Annex Hotel, which opened a year ago, has put a dramatic twist on the old model of hotel restaurants. In fact, it has done away with having a traditionally appointed executive chef and kitchen staff, and instead offers a mix of beloved Toronto vendors to set up shop in the Annex Commons, the restaurant space.

The two anchor tenants are Big Trouble Pizza and the Kensington Market juggernaut Seven Lives taqueria. Daytime coffee and pastries are provided by Reunion Island Coffee and the Drake Commissary. Serving an even mix of hotel guests and local walk-ins, the hotel aims to provide a more casual and current experience of the city than the typical fare offered at other hotels.

“I think when people are coming to cities like Toronto, they’re looking for that authentically local experience rather than a cookie cutter experience,” says general manager Ryan Killeen, who describes the hotel as an “incubator for creativity.”

Almost better known as a wedding venue than an actual hotel, the boutique Hotel Ocho has an added mandate to showcase culinary ability not just for their guests, but for couples looking for a venue and the big-ticketed in-house catering that goes along with it.

Despite being housed in a hotel, the restaurant’s clientele captures a segment of diners not usually found in your typical hotel restaurant — event guests and regulars who work in the small businesses and startups that surround the address at Queen and Spadina. This lends itself well to a menu stacked with reliable, unfussy and surprisingly affordable Italian and French favourites, like a pan-crusted slab of salmon over lemon risotto served with grilled tomatoes; pappardelle loaded with goat cheese, spinach and mushrooms. Hotel Ocho also keeps rotating bar specials for the robust after-work crowd — think chicken tacos and wings. The space itself is sunlit and somewhat barebones (to facilitate wedding setup and take-down), but it’s open all day, from 7 a.m. to midnight to accommodate meetings, coworking sessions and a hoppin’ happy hour.

Louix Louis at the St. Regis

This relatively new hotel restaurant has already received international attention for its glammed up design, which features a 60-foot ceiling mural by Toronto artist Madison van Rijn, evoking swirling whisky in a glass — an homage to the city’s liquor distilling heritage.

Located 31 floors high in the St. Regis Hotel, the gilded Louix Louis bar and restaurant was opened with the intention of being a destination within the hotel, according to Dominik Ociesa, the general manager of the hotel. Serving a mix of hotel guests and locals — which include the private residents who own condo units in the building and have access to the restaurant via a secret elevator — the gilded Louix Louis serves up Golden Age themed opulence.

Their menu is the epitome of French-American fine dining, making unsubtle use of items like ostera and Acadian caviar and black truffle. And the ancillary offerings are no less regal than their dinner menu: A royal brunch comprising a selection of mini treats (including steak with scrambled eggs with shaved truffle) isn’t fully complete without the addition of bottomless Kir Royale, and a slice of the bar’s signature 13-layer chocolate cake, at $29, decadently ends the meal and delivers you softly from the gilded dream.