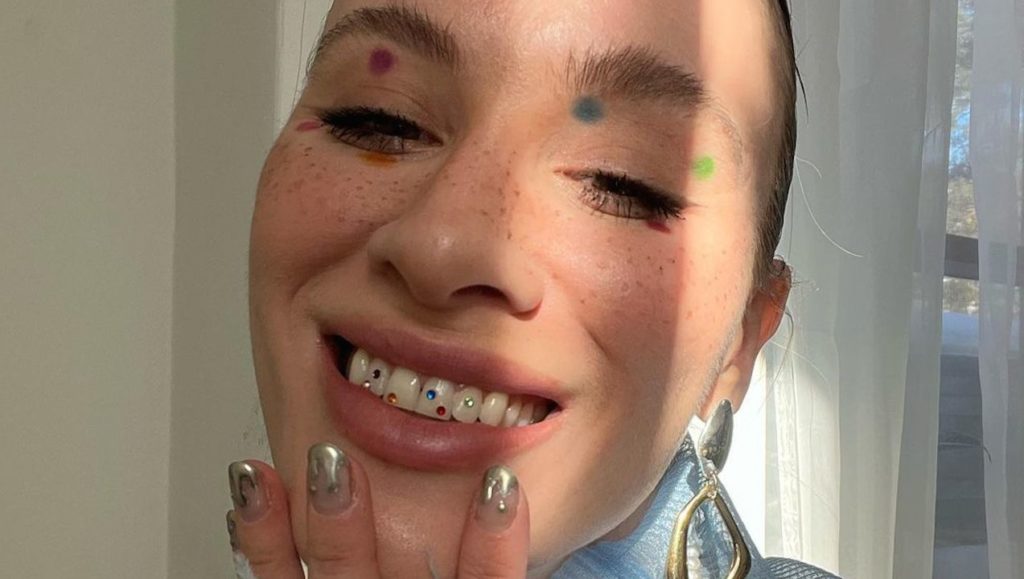 There are purses, there are earrings, there are hair accessories and there are  . . . tooth gems? If you’ve ever wanted to add more bedazzling to your look through more than just jewellery, this new trend taking Toronto by storm is for you.

Tooth gem embellishment is another gen Z trend that is garnering major attention on social media. On TikTok, the hashtag #toothgem has over 160 million views. Pinterest’s 2022 trend report cites an 85 per cent increase in the search for tooth gems, deducing that gen Z are taking jewel embellishments to a new creative level by wearing them not only as clothes, but as cosmetic accessories.

Tooth Gem technician Evelyn Cheung of Tooth Gemz Toronto says that tooth gems have grown increasingly popular since the summer, so much so that she’s been nearly completely booked up in the past few months. “I think people had started anticipating the mask mandates lifting and they started to do tooth gems,” Cheung says.

The trend originally dates back to the ’80s and ’90s. InStyle explains that the force of this particular trend is framed in gen Z nostalgia for these decades. The article references imagery of Black hip-hop artists and rappers in the ’90s wearing grills. But now the fashion trend is so widespread that it varies greatly, from an understated single gem to a full mouth.

Cheung has been providing tooth gem and teeth whitening services out of her home studio at Yonge and Sheppard for two years, after researching cosmetic trends and noticing that tooth gems were increasing in popularity. “I thought I might be able to help make the trend popular in Toronto,” she says.

Recently, Cheung bedazzled the teeth of Toronto fashion influencer and creator Rebecca-Jo Dunham-Baruchel @youthin.asia who has 10,000 Instagram followers. “When I started getting tooth gems, there were mask mandates, and for me it was really fun to have this sparkly surprise that was hidden under my mask,” says Dunham-Baruchel.


“I love customizing anything, so for me tooth gems are just another extension of my personal style that I get to show to the world. I change my tooth gems fairly regularly and I’m inspired by different things,” she says.

Verushka Hille has been offering tooth gem applications for 13 years after working as a dental assistant. Her studio is located north of Yonge and Eglinton. Hille trained Cheung on how to provide tooth gem application service safely and now considers Tooth Gemz Toronto her biggest competition in Toronto.

“I started training people and offering a safe kit with everything they needed,” says Hille.

“Toronto has always been reserved and tooth gems are just blowing up,” she continues. Compared to her friends in the U.S., Hille feels that Canadians just aren’t as bold. But it’s certainly popular among a younger demographic. While Hille says her customers are women ages 25-30, another technician, Tiamo Brillantes of @island.smiles on Instagram, says that her clients range from 18-25. Brillantes offers mobile teeth whitening and tooth gem services in Toronto and the GTA. She started offering tooth gem applications on top of her existing whitening service in August after noticing on social media that more people in L.A. seemed to be getting them.

As for safety, these technicians say that tooth gem application is very similar to applying braces – the orthodontic bracket. The materials are dental and Health Canada approved, says Cheung. “On TikTok some people will use nail glue or gorilla glue, and obviously we do not encourage that at all, because you can ruin your enamel,” she says.

Though you can buy a take-home tooth gem kit on sites like Etsy, Cheung says the results are comparable to a temporary tattoo vs a permanent one – the crystal is likely to fall out after two to three weeks.

Interested in hopping on the latest trend? Here’s where to get your tooth gems in Toronto.


Location: Oshawa studio with mobile service in Toronto and GTA