Time for Cronenberg 2.0 - Streets Of Toronto
Skip to content 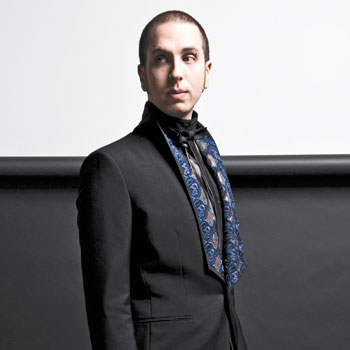 Brandon Cronenberg stopped paying attention to his dad, iconic Canadian film director David Cronenberg, years ago — about the same time the former Republic of Rathnelly resident decided to carry on the family tradition and become a filmmaker himself. When he got into the racket, he knew he’d be put under the microscope, he knew there would be naysayers, and he knew enough to ignore his father’s body of work and concentrate on his own ideas and his own interests. Here’s the catch. The apple doesn’t fall too far from the body-horror tree, and despite his best intentions, there are many striking similarities between his first feature film, Antiviral, and the work of his father. Lucky for us because Antiviral could be the most exciting Canadian film to hit the big screen in 2012.

“Well, I grew up with him,” says Cronenberg, during a recent interview at the offices of Rhombus Media. “So, there is some overlapping of our interests and tastes. But I don’t know, if I obsessed completely over it, it would bomb for sure.”

Antiviral, which makes its Canadian premiere at this month’s Toronto International Film Festival, is memorable and moving whether made by a Cronenberg or anyone else. Stark, chilling and thought-provoking, Antiviral is bolstered by some wonderful performances including the utterly marvellous lead Thomas Landry-Jones alongside local thesps Sarah Gadon and Douglas Smith as well as legendary British actor Malcolm McDowell.

It is set in a world a slight sidestep from our own where obsession with celebrity has gone overboard to such an extent that the buying and selling of celebrity viruses is big business.

The film opens with Douglas Smith’s character heading into the offices of the Lucas Clinic to purchase himself a brand spankin’ new cold sore that once perched lovingly upon the lip of mega-star Hannah Geist (Sarah Gadon). Needles are involved. Full penetration. But as Cronenberg says, “If you're discussing disease as a sex metaphor, there has to be penetration!” Ahem.

The rather disturbing opening sets the stage for a romantic thriller, in a very roundabout sort of way, that results in a dark, satirical portrait of celebrity culture and its ongoing commodification. The premise, says Cronenberg, who had been working on the film since 2004 while a film student at Ryerson University, was inspired by — no surprise here — a nasty virus.

“I went through this sickness, this intense flu, and I was obsessing over it,” says Cronenberg, “the physicality of illness, that there was something in my cells and my body that came from someone else’s. There is a weird intimacy to that connection.” Insert shudder here.

“A friend of mine said he was watching Jimmy Kimmell one night and Sarah Michelle Gellar was on the show,” Cronenberg explains. “She said she was sick and if she sneezed she’d infect the whole audience, and everyone just started cheering.”

Not too surprising coming from a society that has commodified celebrity like no other. Remember that rotten tooth of late Beatle John Lennon that sold for $30K on eBay? So does Cronenberg. Maybe signing up for a needle filled with the Justin Bieber cold sore virus isn’t such a stretch now is it?

Of course, by the end of Antiviral, which Cronenberg describes as a “romantic comedy,” ahem, the obsessive behaviour reaches even greater and profoundly darker heights thanks to the über-creepy performance of Landry-Jones, who portrays Syd March, a salesman turned viral trafficker (it’s a long story).

“If the film didn’t stand up, he’d be crucified.”

“I kind of wanted a character who seemed to be a good window into that world, position themselves as having this sort of distance,” says Cronenberg, of Syd March. “At the end, we figure out he’s motivated by the same obsessive impulses, and I guess I was thinking that celebrity culture is something easy to step back from and find extremely grotesque and make fun of, and I do, but at the same time, we’re sort of defined by the environment and can’t help but be affected by it."

The object of obsession through most of the film is celebrity Hannah Geist, played by Gadon, who has had the rare opportunity of starring in a film for the elder and junior Cronenberg (she was in David Cronenberg’s A Dangerous Method as well as Cosmopolis). She has a unique perspective on the two, as a result.

“Brandon has all the intellect and darkness of his father, yet there is a sensitivity that exists in him in this moment in time,” she says, “a sensitivity that surfaces in his filmmaking. It’s what allowed him to get to the heart of the beautifully twisted but fragile closeness we have with celebrities."

Cronenberg grew up on his dad’s film sets and in the fabled Republic of Rathnelly neighbourhood nestled between the Annex and Casa Loma in Toronto. A self-described “nerd,” he spent his time reading books, playing video games and dreaming of becoming a rock star. His interest in wanting to become a writer, as well as his love of music and visual arts, made filmmaking an easy choice where he could put all three to go use.

And this past spring it all came together for him. In May, the clan Cronenberg was in France where Brandon Cronenberg’s first feature had the rare honour of premiering as an official selection at the Cannes Film Festival alongside his father’s latest, Cosmopolis (with sister Caitlin shooting photos for the New York Times).

This in addition to Antiviral having its Canadian premiere at this month’s Toronto International Film Festival. That’s huge, says producer Niv Fichman.

“It is extremely rare for a first feature to premiere in Cannes as an official selection,” says Fichman.

“And it is probably the first time in their history that a father and son had films the same year.”

But, even if Cronenberg gets a little attention as a result of his dad’s track record as one of the country’s most successful filmmakers, Fichman says, at best, it is a double-edged sword.

For every door that opens, there is an immense amount of pressure to walk through and have your film scrutinized by every two-bit blogger with wireless Internet and a intense need for validation.

“I was expecting a lot of hostility even when I got into films in general,” Cronenberg explains. “I guess because my dad makes film, and I just thought that’s the way people were. I hadn’t gotten that, but actually now I have gotten it … people who haven’t seen the film, who don’t know anything about me, who happen to dismiss me because my dad makes films.

“If the film didn’t stand up, he’d be crucified,” says Fichman, who financed the film through the unique First Time Filmmakers Initiative he set up along with Alliance Films that has also turned out Hobo with a Shotgun and The Boy Who Smells Like Fish, among others.

Fichman saw potential in the young Ryerson University student when he caught Cronenberg’s short film Broken Tulips at the enRoute Film Festival in 2008 — a five-minute gem that would eventually become Antiviral.

Antiviral has its North American premiere at TIFF this month, followed by its theatrical release in October. Check out the creepy trailer at www.youtube.com/watch?v=XIZb50HiBCo.