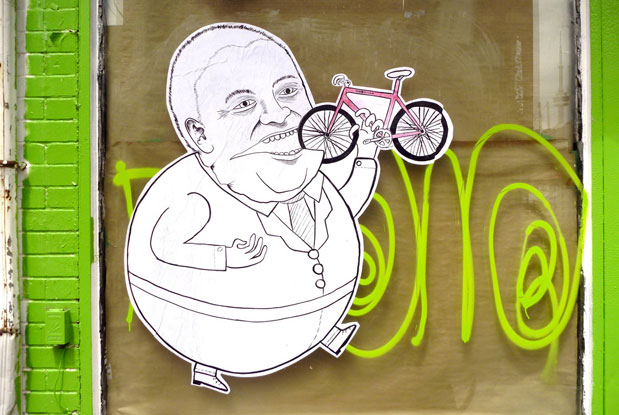 Who in their right mind would call Rob Ford the “art mayor?” Rob Sysak, executive director of the West Queen West BIA, that’s who. Sysak says the city’s new graffiti management plan is so great that Ford will be known as the art mayor because of it. Seriously. Rob Ford. Our mayor.

From a business perspective, the plan is an improvement from having to dish-out big bucks for removal each time spray paint hits brick. The plan allows graffiti in designated areas and lets artists and businesses create murals without needing a permit from the city. Murals, for the most part, act as a deterrent to illegal graffiti.

And, as artist Angel Carillo points out, having your artwork wiped clean within days of creating it is also a waste of money and time for the artists.

Which brings us to the Street Art Showcase, an exhibition of local and international street art happening this Saturday at Metro Hall. It looks like it will be anything but a waste of time for anyone.

This week, art is being digitally projected onto buildings at night in various neighbourhoods as a lead-up to the main show Saturday evening.  (To find out where these “projection bombs” will hit, you can follow the Showcase’s tweets).

All day Saturday, street artists will be performing demonstrations at Metro Hall, accompanied by live music and followed by more evening projections at 8:30 p.m.

But let’s face it. New plan aside, Rob Ford is not really known for his love of street art. He’s more known for sweating it out with a power washer, promoting an aggressive graffiti clean-up plan in front of TV reporters. Was that so five months ago, or only five months ago?

We’ll see. Here are three artists who may make Ford wish he had his power washer back.

1. Deadboy. Have you seen the stencil of the Ford twins as Tweedledum and Tweedledee around Queen West? What about the one with Ford giving the single finger salute, or swallowing a streetcar? The increasingly less anonymous Deadboy, who calls Ford his “muse,” didn’t even pick up a can of spray paint until 2010. He says he got inspired to do street art after watching a documentary, and got politically inspired after being kettled at the G20 last year. There’s also some mean hip hop on his personal blog.

2. Angel Carillo (a.k.a. ‘Cruz1’). Having your art commissioned by biggies like Adidas and Holt Renfrew is one way to go legit. But Angel Carillo , a.k.a Cruz1, doesn’t shy away from the importance of creating street art for the community’s sake, and even mentors youth in his spare time. “For me, graffiti is the art of calligraphy,” he says. He’s come a long way from starting out as a tagger and seeing some scary stuff while spraying in West-end sewers. But with that amount of talent and dedication, Carillo is sure to keep inspiring many up-and-coming artists, so the Ford twins may have even more satirical cartoons to deal with.