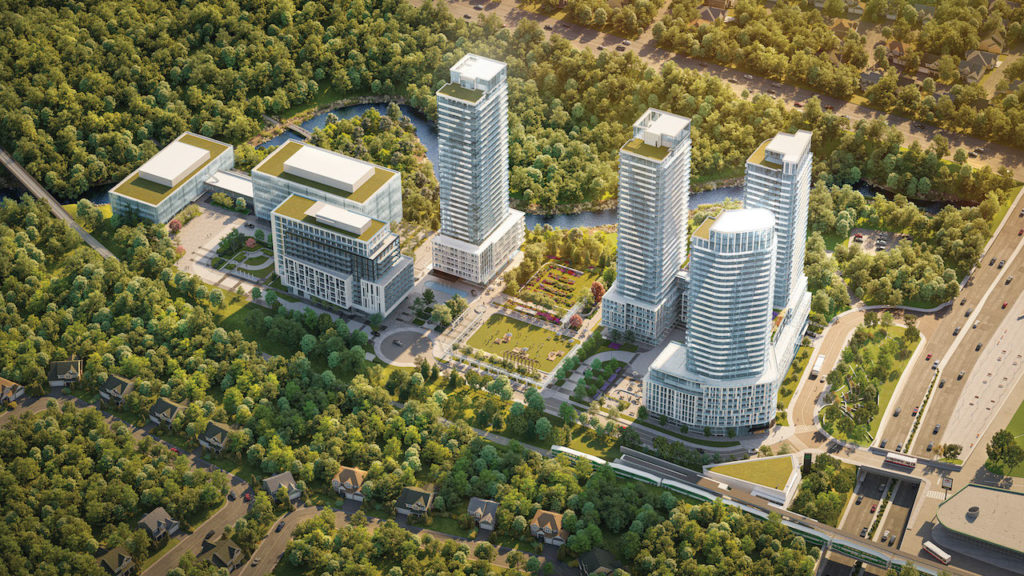 Construction is expected to begin soon on a massive 12-acre, five-tower condominium development in Bayview Village that could be called “its own little city.”

That’s how Jason Shiff, executive sales manager for Amexon, the landlord and developer behind the mixed-use mega project, describes it. “Nothing’s been done like this in the city of Toronto,” he says.

Located at 1200-1220 Sheppard Avenue East, just west of Leslie Street and the Don River, the project dubbed the Residences at Central Park encompasses about 1,500 units ranging from 439 to 1,200 square feet in size.

The new, heavily glazed condo towers — a trio of 31-storey skyscrapers as well as 19- and 12- storey buildings — are set to join two existing office buildings, including a daycare. The offices, Shiff explains, are due for a major facelift: “We’re going to match the architecture to the residential component.”

“That’s one of the biggest features of the project,” says Shiff of the soon-to-be budding green space. “There’s going to be an ice-skating rink in the winter, and then the space will turn into a farmers’ market into the spring and summer — along with events you can do there.”

The Residences at Central Park boasts other kinds of green attributes, too. Every one of its approximately 1,500 parking spots is to have an electric vehicle charging station. The developer says this is a first for Canada. “Especially being attached to nature, where we’re located… it made sense to do something like that,” says Shiff, noting rooftop solar panels and green roofs will crown the new buildings.

Amexon, which purchased the land in 1995, anticipates shovels to be in the ground as early as mid-September. The development’s first phase has an anticipated completion schedule of 2025.

What’s about to be built is scaled back considerably from an earlier Amexon proposal, refused by the city in 2012, for nearly 2,000 dwellings with a maximum height of 43 storeys. Amexon subsequently appealed the city’s decision to the former Ontario Municipal Board, and, in 2013, a settlement was reached between the developer and the city, Toronto and Region Conservation Authority, and the Bayview Village Association.

“Whether it’s something everybody in the community likes or not, it’s just the reality of what we’re having to deal with because we need more housing supply, according to both the province and the municipality,” says Victoria Joly, chair of the BVA’s municipal and government affairs committee, regarding the project.

Although the community group would’ve liked to see the development move ahead with further height and density reductions, Joly appreciates the wide mix of uses baked into the site, as well as the variety of suite sizes, including three-bedroom units. She also appreciates the work Amexon put into assessing any impacts its development could have on the sensitive Don River ecosystem nearby.

“I guess the only thing as a community that you can do is just make sure that things are being carefully considered,” says Joly.