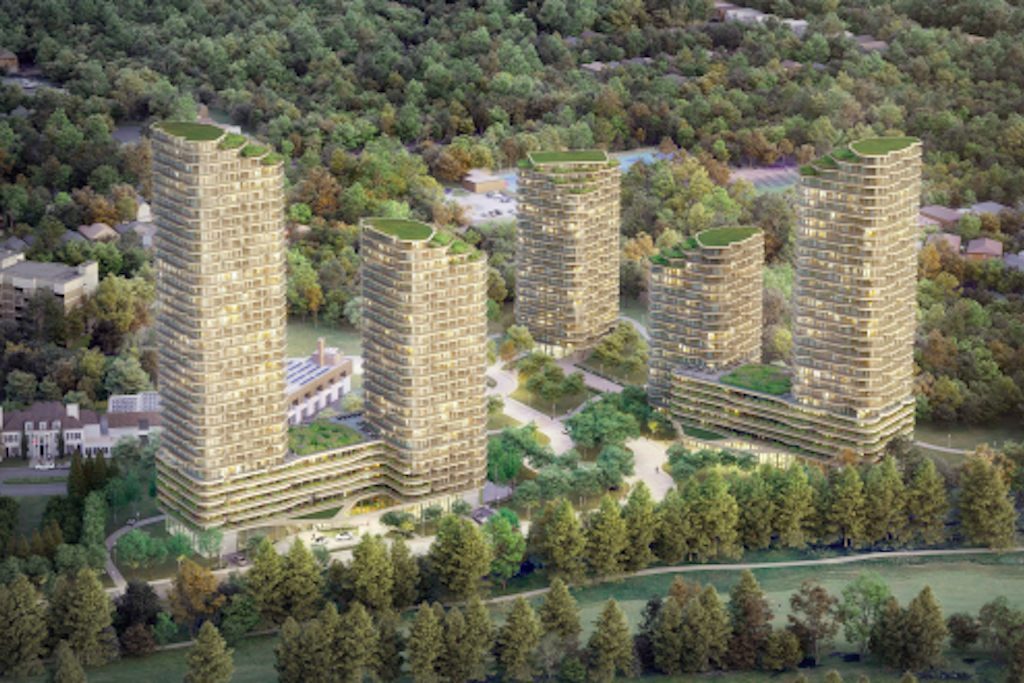 Community consultation has begun on a development proposal that seeks to bring over a thousand new residential units to the current site of Thornhill’s Shouldice Hospital.

The City of Markham has received the official plan and zoning by-law amendment applications by Liberty Developments for 7750 Bayview Ave., the current site of the hospital, which is one of Canada’s few private healthcare facilities and specializes in hernia procedures. The amendments would allow for the development of three buildings on the site, consisting of five combined towers ranging from 18 to 35 storeys and home to 1,287 residential units.

The applications mark the beginning of the first phase of a long-term, multi-phased development of the property. The hospital itself will be unaffected and will continue to operate under a lease arrangement for 16 more years.

At a public meeting on Sept. 9, held virtually due to the COVID-19 pandemic,  residents heard from representatives of Liberty Developments regarding the proposed development’s impact on stormwater management and transportation.

Residents expressed concerns that the increase in paved surfaces associated with the development would increase the chance of flooding in the area during severe rainstorms.

Residents learned that although the development’s water supply will be provided by the city of Markham via an existing water main along Bayview Avenue, the proposed development would not direct water to the municipal storm sewers. Instead, the development will feature a self-contained stormwater management network, which will employ a stormwater capture system to capture water and hold it in tanks, using some for the landscaping on the grounds, while the rest of the water will be directed through an internal sewer network and released into Glynnwood Pond.

Residents also expressed concern about the increase in traffic in the area.

“This is not Yonge Street. There is no high-level transit or cycling infrastructure here. This area is car-dependent,” said one resident.

“It seems irresponsible that this density is proposed in a car-dependent area.”

According to Liberty’s presentation, the development will coincide with traffic improvement measures in the area, such as an extension of Royal Orchard Blvd to intersect with Bayview Avenue at the signalized intersection at Green Lane.

Over the longer term, Liberty contends that their studies show development in the area will continue to be acceptable with regards to traffic due to future planned improvements such as the widening of Bayview Avenue and the addition of HOV lanes, and the extension of the Yonge subway line.

According to Tim Arnott of BA consulting group, retained by Liberty Developments, a private shuttle service is planned for the development, which would provide direct connections to rapid transit stations and would be overseen by the condominium board.

“I think the appeal of the shuttle for those who would look into buying a residence here is that they could facilitate their travel without using a car,” said Arnott, who said the shuttle will likely connect with Finch station at first, and later with the planned Clarke station on the proposed Yonge subway extension.

Future community meetings are due to be held virtually on Sept 23, where heritage preservation and building heights and built form are due to be discussed, and Oct 6, where the discussion will be the overall project.