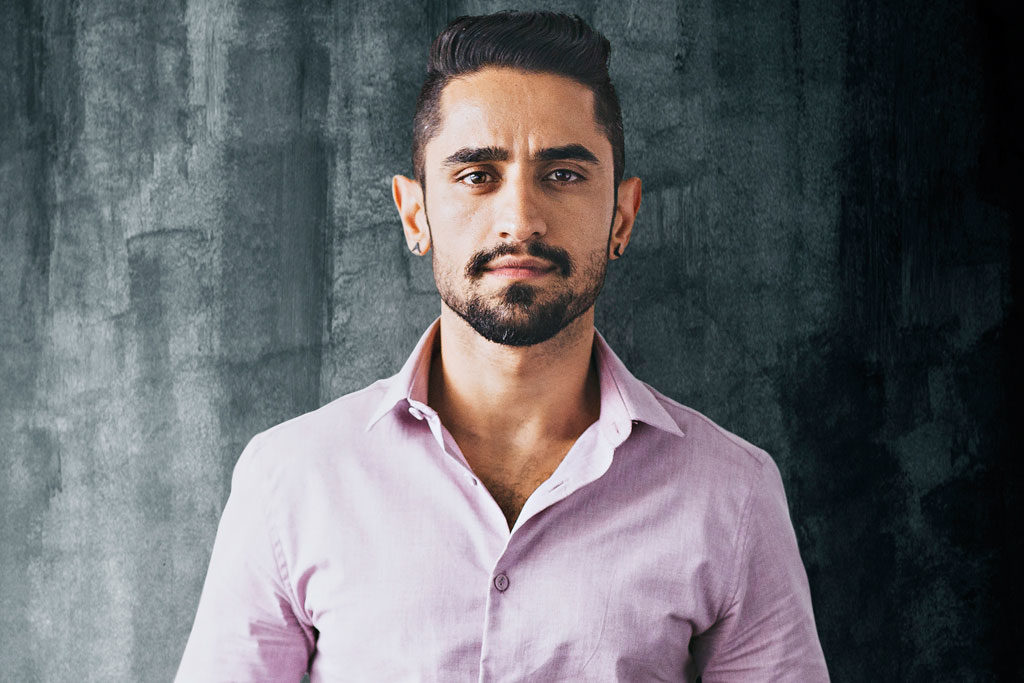 Ali Momen’s first leading role in a film may be as a violent gangster, but the Thornhill-raised stage veteran is clearly a hero in the eyes of his acting students at Sheridan College and his friends and family that attended Beeba Boys’ gala premiere at last month’s TIFF. The film hits theatres on October 16.

We met with Momen at the Red Rocket café, in the St. James Town neighbourhood, a day before he was to leave for the next film festival that Beeba Boys was showing at.

“I’m flying to Sudbury tomorrow for their film festival,” Momen says. “I think we’re opening it. Then we’re going to London, England. Then Havana, then Florence.…”

Momen has high hopes for the film’s potential abroad. “I think it’ll do especially well in London,” he says. “There’s a huge Punjabi community there. The film’s set in Vancouver, but they’ll definitely get the cultural references.”

The actor has been busy throughout TIFF and is clearly relishing the spotlight Beeba Boys is bringing after he has toiled for so long as a working actor, both on stage and off, and teacher.

“I’ve always wanted to have one foot in film and TV, one in theatre, onstage,” Momen says. “They complement each other — and you really should do both, in this business.”

It wasn’t until high school at Thornlea Secondary that Momen gave any thought to the prospect of acting for a living. “I didn’t start acting at a young age, other than making fun of my parents.”

“Then one day in Grade 9, I was doing karaoke in the hall, singing to impress a girl who was in OAC. (It was Backstreet Boys’ “I didn’t get the girl.”) The drama teacher, Jamie Graham, came over afterward,” Momen recounts. “ ‘I saw you sing — come with me.’ He took me to the music room, and we sang with the music teacher. From then on, I fell right into it. I became head of the drama club, acted in shows … whatever.”

He was accepted into Sheridan College’s musical theatre program. “I’ve taught there for the past four years; it’s a nice complement to performing for me.”

After finishing his training at Sheridan, Momen found some work in TV and film, but there were better opportunities onstage. He ended up at the Shaw Festival where he began with small parts, working up to lead roles over a three-year period. Since leaving the company, Momen has worked all across Canada in TV and film, but when he heard about the Beeba Boys role, he knew it was different.

“I got an email from my agent asking for a demo reel. I sent it, and Deepa emailed me personally, asking to meet for coffee,” Momen says. “I still didn’t know why, but of course I’d meet with her. I’ve always been a fan. We met at the Second Cup at the Bloor Jewish Community Centre. She told me about Beeba Boys and that she couldn’t find the co-lead.”

Momen continues: “[Mehta] said to me, ‘I know you’re not Indian, but I think you can pull it off.”

“Films shot in Canada are usually American, so Canadians are mostly hired as tertiary characters for small roles. And when you’re an actor of colour, there are even less opportunities to play leading roles.”

“After the first audition, which I didn’t think went well, [Mehta] told me: ‘Come back for another — and I want you to change your clothes and hair, grow a goatee and learn a Chinese rap song,’” Momen says. “I’ve never had to prep for an audition like that, but after that second one, I knew I had it.”

Before filming began, Momen was involved in much preparation, both as an individual and in a group. “Because I’m not Indian — not Punjabi, not Sikh — I had to immerse myself in the culture, a beautiful, beautiful culture,” he says.

“Prior to the shoot, the cast did a five-day theatrical workshop, doing emotional and text work.” The rationale behind this was so that, when the actors arrived on set, connections between them would already have been forged.

Learning about the organized crime stories that informed the script also demanded a lot of work. “In the Surrey [, B.C.,] area there is a lot of gang warfare within the Punjabi community,” Momen says. “That’s just a fact. So there are some very dirty and dangerous things in the script.”

The actors in the cast had widely varying experience, which came as no surprise. “Films shot in Canada are usually American, so Canadians are mostly hired as tertiary characters for small roles,” Momen notes. “And when you’re an actor of colour, there are even less opportunities to play leading roles. So what prepared me to play a character like Nep onscreen was my stage work.” Momen rattles off a list of playwrights —  Ibsen, Shaw, Chekov, Shakespeare — noting that had he not been heavily involved in theatre productions, he “wouldn’t have been equipped for the role.”

Premiering a Canadian film at TIFF was definitely a career highlight for Momen. “The gala was a really exciting experience. Twenty-four hundred people watching the movie you’re in,” he says, “feeling them respond to it, seeing how they react to plot twists, was all amazing.” Despite all the hullabaloo surrounding the film, Momen’s TIFF highlight was “hugging my mom after the screening. That was everything.”

Besides all the festivals, Momen is very busy with upcoming stage work. This month, he’s workshopping a new Judith Thompson play in Kingston called The Convict Lover (expect the full production in the new year). Come winter, catch him in Disgraced, a Pulitzer Prize winner, at the Panasonic Theatre.

Not that Momen has much free time (when not on set, stage or in a classroom, “I’m at Goodlife Fitness,” he jokes), but he does have a few favourite T.O. haunts. His favourite bar is Reposado on Ossington, where they do a mean mango margarita.

“When I visit my folks in Richmond Hill, it’s all about my mom’s kitchen.”

Right now, life is moving along at a hectic pace for Momen, although he is more than pleased to be along for the ride.

“I feel very lucky — anyone who says luck isn’t involved is lying to themselves,” Momen says. “But you gotta be ready for it.”

Sage advice for his students and in general.