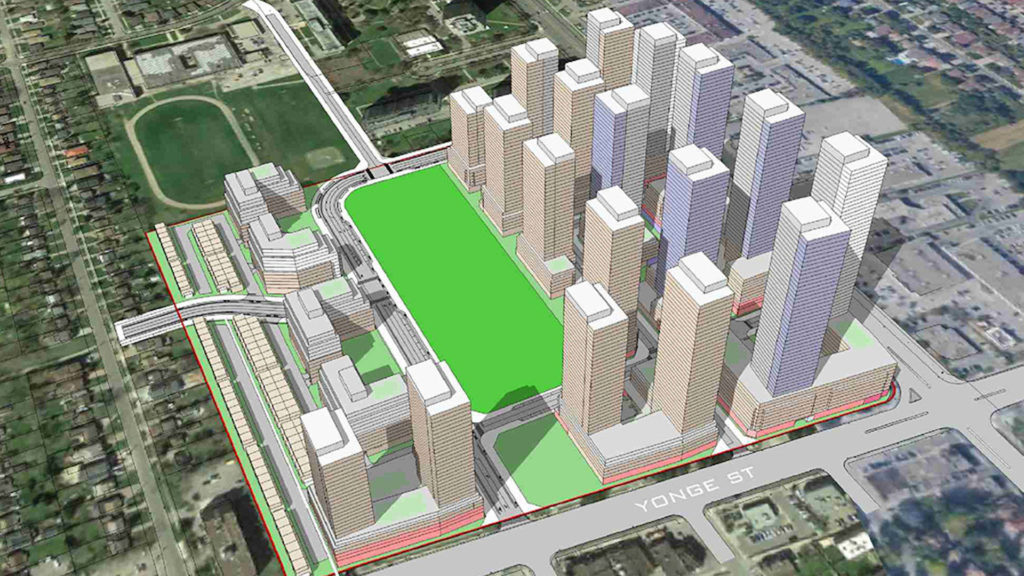 A major new development project is being proposed to replace Centrepoint Mall at Yonge and Steeles ahead of a new Yonge North subway station coming to the area.

The application from developer Revenue Properties Company proposes 22 buildings ranging from two towers that reach 50 storeys to a mix of high-rises, mid-rises and townhouses.

The plan also includes a central public park that takes up 20 per cent of the site and would be run by the city. It would connect to Yonge Street and Steeles Avenue by a network of new public streets.

Centrepoint Mall dates back to the 1960s and is the latest mall in Toronto to be targeted for redevelopment. Yorkdale Shopping Centre will also be getting a series of buildings on its surface parking lot, though the mall will remain in place, and Galleria Mall near Dufferin Rd. and Dupont St. has already been partially demolished to make way for a new condo community.

Local councillor John Filion said the repurposing of malls has been done for decades.

“Wherever you have big parcels of land, you have developers buying the land and redeveloping it,” he said.

Filion said the density being proposed is not too much and was to be expected given the new Steeles subway station slated for the area. The province has mandated greater density in transit zones to create more housing supply as the market faces a shortage that has helped prices skyrocket.

Filion expects this development to be done in phases and take over 20 years to complete.

However, Filion is concerned that what is currently being proposed will not be the final shape of things to come.

He expects provincial transit agency Metrolinx to expropriate a “big chunk” of the land for transit infrastructure, which will force the developer to up its density and the height of the buildings.

“[Metrolinx] will make it much worse,” he said. “They will stick a [bus bay] in the middle of the site to save money. So you’ll have this big ugly bus bay there.”

Up until now, the bus bay was shown to be underground, which Fillion said is better but a more expensive plan. He will be holding a community meeting within the next month to go over the plans.

City planner Guy Matthews, who is taking a lead on the project, told Post City that expropriating land from the site is within Metrolinx’s authority and it has done so in the past elsewhere. The city is currently waiting for feedback from the agency, Matthews said.

As for the loss of retail, Matthews said 29,000 square metres of retail is a part of the new proposal, which will provide opportunities to replace what is currently there.

City planning will create a preliminary report that will go before community council in April, he said.