This T.O. couple got married in a hospital a year after brain surgery
Skip to content 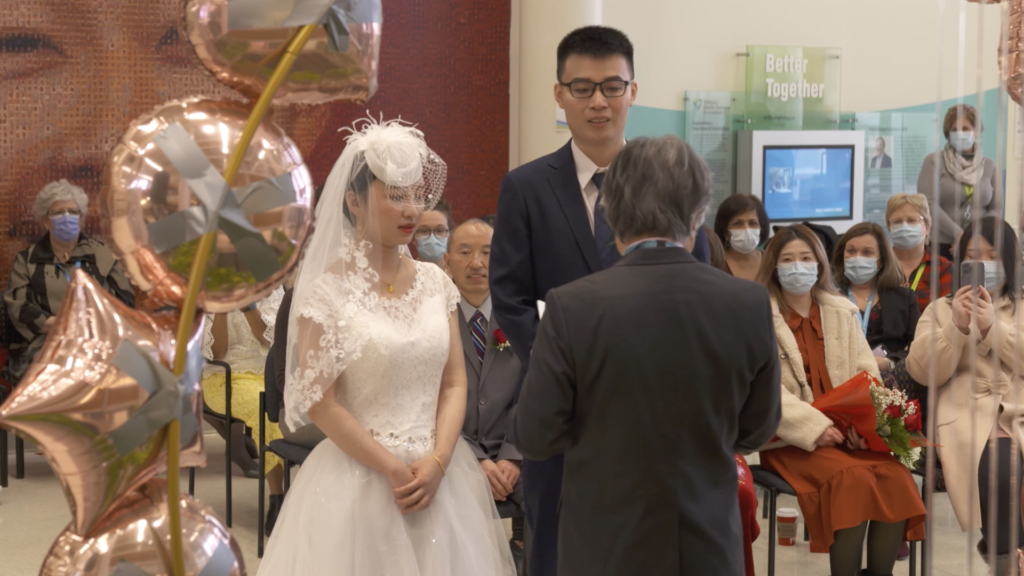 A hospital lobby might not be the first place that comes to mind for a wedding ceremony. But for a Toronto couple who had made Queensway Health Centre their home for most of 2022 when the bride underwent brain surgery, it was the perfect place.

Siqi Yang suffered a brain bleed called an Arteriovenous malformation rupture, which meant there was a tangle of blood vessels in her brain that was diverting blood from the arteries to the brain and bypassing her brain tissue. The condition required brain surgery in February, followed by months of rehab. According to a Trillium Health Partners (THP) representative, she had been working with the Queensway neurological rehab clinic for a year, where her recovery was significant, helping her regain the ability to walk and talk.

Yang and her fiancé, Tao Gao, met while working at a T&T Supermarket and fell in love, but their paths crossed before that — they both attended York University at the same time, but they never met each other while there.

With both of their parents visiting from China for a short time, Yang and Gao wanted to get married before they left, and when the opportunity to have the wedding at the Queensway Health Centre came up, they said yes. They “felt the hospital has been a part of their journey over the last year and were looking forward to celebrating with them, as they feel like family.”

After suffering a brain bleed and undergoing a craniotomy, Siqqi made it her goal to one day be able to walk down the aisle and recite her vows. Today she did just that at @THP_hospital with her care team by her side. Congratulations Tao & Siqqi! @Goodable pic.twitter.com/u8XOVePg9J

Yang and Gao married with her care team by her side and their family and friends in attendance on Monday. “Siqqi made it her goal to one day be able to walk down the aisle and recite her vows. Today she did just that,” tweeted THP’s communications manager Keeley Rogers on the day of the wedding.