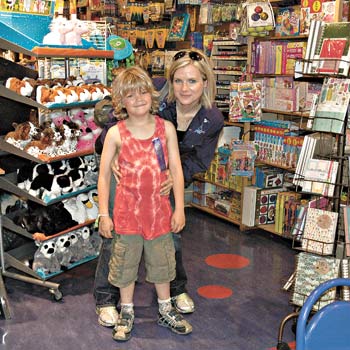 IT IS OFFICIAL, Archie Andrews has proposed to Veronica over Betty in the eponymous checkout line staple, ending a love triangle 70 years running. Now, the gang from the impossibly wholesome town of Riverdale is back on the map, as readers rush to revisit the characters in their favourite hangouts, like Pop Tate’s Chocklit Shoppe, Pickens’ Park and, of course, The Andrews’ residence. But no such place could actually exist in real life, could it? It could. It does.

As I walk through the leafy green streets of Toronto’s own Riverdale — bounded by Danforth Avenue and Lakeshore Boulevard to the north and south, and the Don River and Leslieville to the west and east — I imagine that it might just rate against the carefree comic universe of John L. Goldwater.

Joining me for an afternoon tour of family-friendly Riverdale are Juno Award–winning songstress Melanie Doane (who, with her blonde locks, bears a striking resemblance to the adorable but unchosen Betty Cooper) and husband, Gemini winning actor-director Ted Dykstra, who, along with son, Theo, 7, have agreed to show me some of their favourite local haunts.

“The number one greatest thing about the neighbourhood is you can walk everywhere,” says Doane.

Doane and Dykstra moved to the area five years ago while pregnant with daughter Rosie. They say Riverdale’s small-town vibe appealed immediately.

The couple is currently focused on work. She’s busy with the rerelease of her album A Thousand Nights and an upcoming East Coast tour while he’s occupied with directing Soulpepper Theatre’s Of the Fields Lately and prepping for the upcoming Billy Bishop Goes to War. They say their century home is a welcome respite from their busy careers. “We love it,” says Doane. “We have space for the kids, and it’s just a beautiful place.” At the cheerful Mocha Mocha café (489 Danforth Ave.), we stop in for a drink and browse a menu of hearty, homestyle options.

Owner Marijan Tripkovic, along with wife Mercedes, has been running the café for the past 17 years. He says the secret to their continuing success is fresh, quality ingredients and reasonable prices. He recommends that firsttimers try the brown rice salad, turkey club and crepes, all bound to charm, and insists that once you’ve tried the food, you’ll be sure to return.

“I would say 90 per cent of our customers are regulars,” says Tripkovic. This is a nice community, and I’ve had many people coming here since we opened. I’ve seen children come in who are now grownup and getting married.”

The nearby Riverdale Perk (633 Logan Ave.) south on Logan Avenue is another notable café favourite, with customers flocking to the counter for their famous hot chocolate and key lime tarts.

Next we check out one of Theo’s favourite locales, Treasure Island Toys (581 Danforth Ave.), which boasts a dazzling display of classics like Lego and Thomas the Tank Engine, alongside newer favourites like Sophie the Giraffe.

Best of all, a giant pirate ship sits smack in the middle of the store. “Look Mom,” says Theo as his eyes widen at the latest display of Webkinz. “This is so cool!”

“This is really an area for young families now,” says Doane. We next head to Withrow Park where we see couples reading on blankets in the grass and families enjoying picnics. The park hosts a popular farmers’ market each Saturday and free fitness activities like yoga and dance.

Theo adds that it’s an excellent place for catching tadpoles. Back on Danforth, we pass the latest branch of Type Books (503 Danforth Ave.), which opened just over a year ago.

“It’s always nice to have something like this come into the neighbourhood,” Doane says. “It has a really good selection of kids’ books.” In keeping with the kid-friendly theme, this Type also offers an entire “kids’ lounge,” which caters to the younger set with storytelling, art classes and workshops.

For a more formal night out Doane says she and Ted enjoy dining at Globe Bistro (124 Danforth Ave.), which boasts more than 20 wines by the glass, along with their “think global, eat local menu” of offerings such as Norfolk County pork chops and Georgian Bay whitefish.

“I have only had a chance to go there a few times,” she says. “But I love the food, decor and wine.” As we end our tour on the steps of the elegant Holy Name Catholic Church (71 Gough Ave.) Dykstra takes a moment to reflect on what makes Riverdale so unique in the rich tapestry of Toronto’s neighbourhoods. “Riverdale is one of the last Toronto neighbourhoods that isn’t trying to be ‘something,’” he says.

“It is very content to be Riverdale, and the population is very happy to slip under the radar of ‘trendy’ or ‘world class!’ I feel very at home. I hope not too many people catch on!”