This restaurant is bringing massive, world record-holding pizzas to Toronto
Skip to content 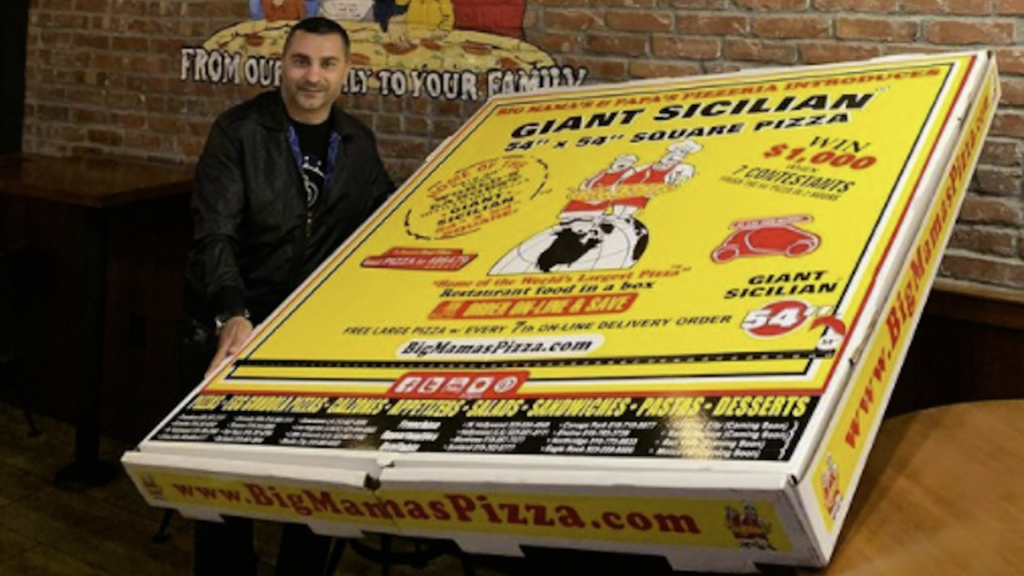 Have you ever wondered what a 54 inch pizza looks like? Have you ever wanted a slice bigger than your head? A Southern California pizza chain is here to help you eat more pizza than you have ever imagined possible.

Big Mama’s & Papa’s Pizzeria is bringing their famous Giant Sicilian pizza, claimed to be the largest deliverable pizza in the world, to Toronto. The SoCal chain was founded in Los Angeles in 1992 by brothers Aro and Allen Agakhanyan, who opened their first location while they were both attending high school. Now, they’ve expanded their venture and made their pizza famous, as their restaurant is frequented by Hollywood stars and foodies alike. It shot to international fame when, at the 2014 Oscars, host Ellen DeGeneres handed out the eatery’s slices to Harrison Ford, Angelina Jolie, Brad Pitt and Leonardo DiCaprio.

The Giant Sicilian is 54 by 54 inches, making it officially big enough to enter the Guinness World Record Book. They also offer unique flavours alongside gluten-free and vegan options with rarely-used ingredients, like avocados and vegan sausage. And, soon, Toronto pizza lovers will be able to get a taste for themselves: a local franchisee is looking to open four outposts in the city by the end of the year. Sam Wadera, the managing partner of the franchise group bringing Big Mama’s & Papa’s to Toronto, told Retail Insider they have locations in downtown Toronto, Mississauga, Hamilton and at York University in the works.

“Initially, we are starting our expansion in downtown Toronto and hopefully that deal will firm up. The GTA will be the initial focus and over a period of time we will expand further to the smaller communities further away from the GTA,” he said. “We are the first so-called franchisee for Ontario within Canada. We’re also the first franchisee for them globally.”

While nothing is set in stone yet, Wadera and the team hope to open Big Mama’s & Papa’s Pizzerias in Toronto later this year.