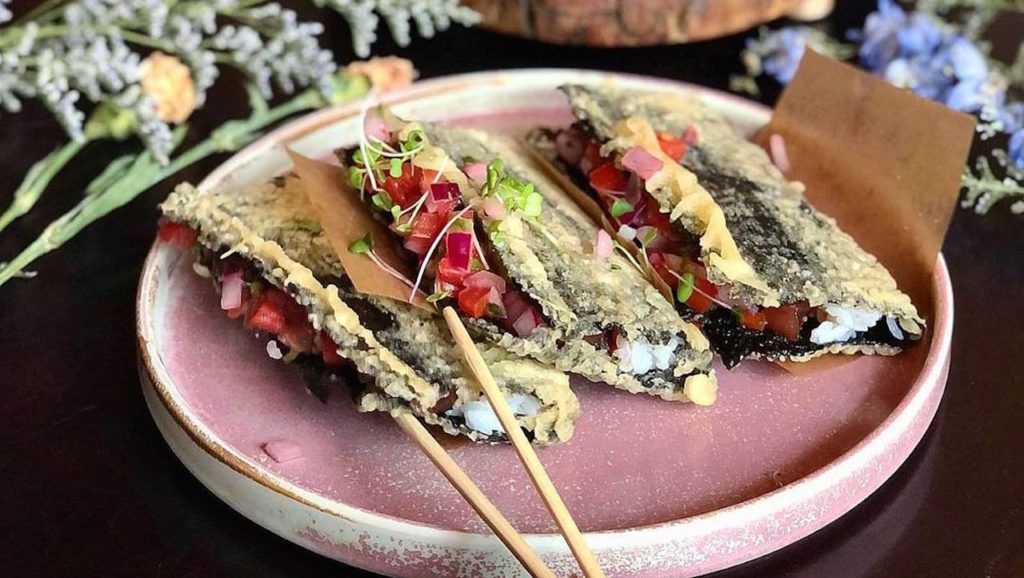 Hay Sushi is a Japanese restaurant and izakaya bar that’s known for its creative approach to Japanese cuisine.

First coming onto Toronto’s culinary scene in September 2020 with the opening of their first location at 41 Spring Garden Ave. in North York, Hay Sushi recently opened its second location in Forest Hill.

With warm wood-panelled walls, green velvet dining chairs, wood-wickered hanging lamps, and plenty of live plants, the indoor dining space is cozy and inviting, and provides the perfect atmosphere for any occasion, whether it’s a quick catchup with friends or an intimate date.

Alongside old-time favourites, Hay Sushi has added Japanese tacos to the menu, using crispy seaweed (nori) as a base instead of the traditional Mexican method which features ingredients enveloped in a corn or flour tortilla.

Hay Sushi’s signature tuna nori tacos were the first ones on the menu—merging both Japanese and Mexican flavours, the crispy nori (seaweed) tacos are stuffed with delicate chunks of tuna sashimi and fresh pico de gallo on top of a bed of rice that’s drizzled with salty soy sauce.

The final product looks similar to a deconstructed hand roll, which is another popular item at many Japanese eateries in Toronto. After much success with the tuna tacos, Hay Sushi now offers a spicy salmon or regular salmon sashimi version, as well as a vegetarian option that’s done using fried eggplant, diced tomato, fried onions, and a secret veggie sauce.

More than 15 different kinds of sushi and sashimi can be ordered a la carte, or in sets. There are 10 signature sushi rolls on the menu which come as six or eight pieces and 25 classic rolls, which can all also be ordered as a hand roll. Signature rolls include classics like the Green Dragon (Dynamite roll with sliced avocado on top), as well as more intricate creations, like the Sakura Blossom (fried shrimp, avocado, cucumber, mayo crab, spicy sashimi mix, nori powder and bubu arare wrapped in soybean paper).

If you’re in the mood for something a little bit different, don’t miss Hay Sushi’s wafu pasta. With five different options available, diners can enjoy anything from the classic Italian Napolitan pasta with Italian sausages, paprika, arugula, grape tomato, house tomato sauce, jalapeno, parsley and grated Parmigiano, or opt for something different, like the sukiyaki pasta which is a rich garlic oil pasta with mixed mushrooms, green onion, egg yolk, and thinly sliced beef brisket marinated in yakiniku sauce and garnished with shredded nori and sesame seeds.

You can stop by Hay Sushi from Wednesday to Sunday from 12 to 10 p.m. Hay Sushi’s Eglinton location is currently closed on Mondays and Tuesdays, but guests can stop by the North York location on Tuesdays instead.