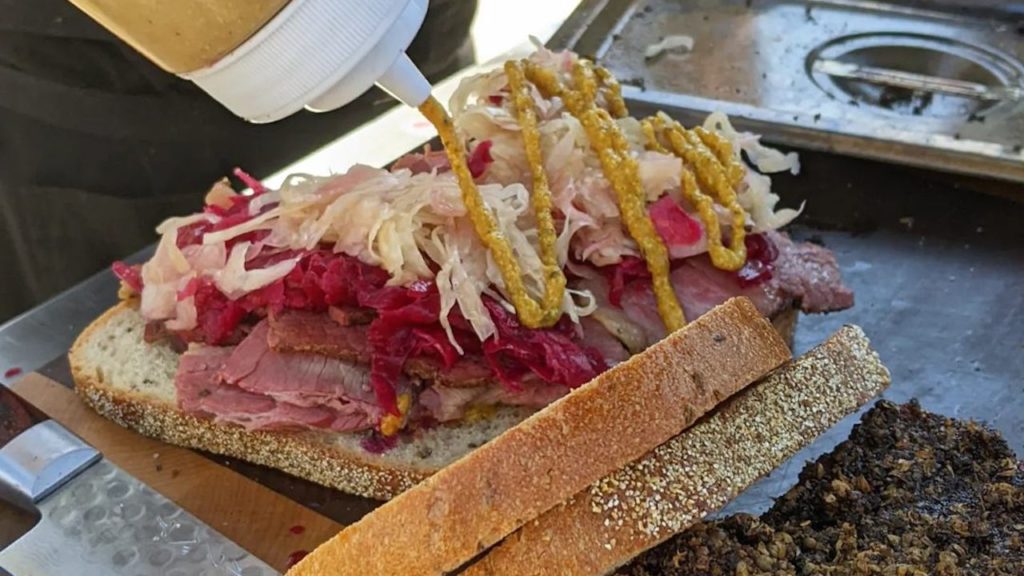 Alexander Dalgliesh-Switzer loves pastrami sandwiches. And, though he’s been living on and off in Toronto since 2011, he couldn’t seem to find one that met his standards. “I thought I couldn’t be the only one that felt that way,” he says, “and I guess I wasn’t wrong.”

He decided he had a solution. After all, Dalgliesh-Switzer has nearly two decades of culinary experience, which saw him take on positions at Fable in Vancouver, Le Quercy in Souillac, France, the Old Spaghetti Factory in his native Calgary and 416 Snack Bar and Pinky’s Ca Phe in Toronto. So, he thought, he would just make his own pastrami sandwiches.

Switzer’s, the hot pastrami cart, was born, launching at the corner of Vaughan Road and Winona Avenue on May 8. Dalgliesh-Switzer bought what he thought was a week’s worth of supply and prepared to offer his $12 pastrami sandwiches, served with a pickle spear, to his community. But, instead, he sold out his stock in five hours. “It’s still unreal. I know it sounds cliche but I still don’t believe it,” he says. “I’m expecting to wake up at any moment.”

“I was raised mixed-faith; Jewish and Catholic. My first Pastrami experience was at Swartz’s in Montreal,” he says. “There’s a saying in Farsi Be del’am chaspid, which was described to me as sticking to your heart. Like it hit the spot, but deeper. Pastrami did that to me, it entwined with my Jewish-Canadian identity. That’s what made me seek it out, and what I found lacking in the city.”

Piggybacking off the first launch’s success, Dalgliesh-Switzer has plans to continue offering his pastrami sandwiches at the same intersection. “I live in the area, the enthusiasm here would make me feel like I was betraying my community not to become at least a semi-regular fixture,” he says. But, that doesn’t mean he’s not eyeing other areas.

“We’re planning on trying out St. Clair and Bathurst for a few weekends if everything goes smoothly. We’re also in talks to head to a street party in Humewood on June 17.”

“Doubt always looms when you leap off any cliff and it’s still clinging to me dearly. Once I can confirm I’m awake in the real world, I’m sure the fact that we sold out a projected week’s worth of product in a total of five hours will kill that insecurity,” says Dalgliesh-Switzer. “I just have to make sure I don’t swing too far the other way and let it get to my head.”