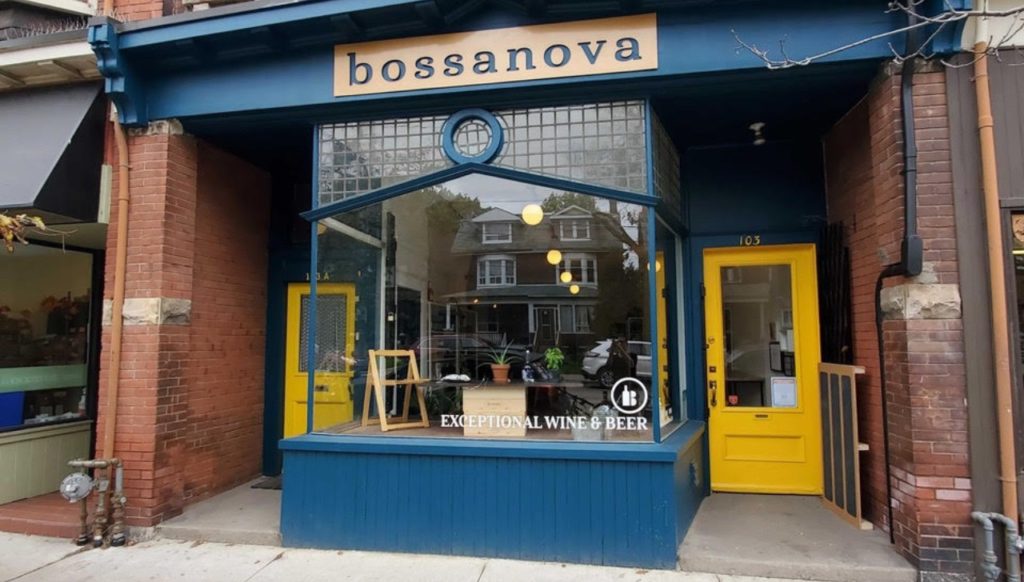 While the pandemic has certainly not been an easy time for many businesses in Toronto, one positive side is seeing how many exceptional and original business ideas have blossomed from the changing trends in consumer demands.

Roncesvalle’s new wine and beer bar, Bossanova, is one such business. Longtime friends Ben Plisky-Somers and Dan Grant took the chance at being able to sell alcohol out the door, which they wouldn’t have been able to do two years ago.

“With alcohol deemed an essential service,” says Grant, who had started a business just weeks before pandemic restrictions shut it down, “and as something I’ve been passionate about a long time, having the opportunity to work with a really good friend to build something fun and unique was just too good to pass up.”

With Plisky-Somers as the wine expert and Grant as the beer expert, Bossanova’s original concept formed. The shop opened Nov. 6 in an eighty-year-old building with tin ceilings. It’s not easy to miss with its bright yellow doors and a blue awning that welcomes customers inside, where shelves are well-stocked stocked with beers from Belgium to Ontario. “I put a big focus on the more playful and inventive styles the brewers are doing, so there’s a lot of stuff that’s wine-influenced or barrel-aged or fruit-infused,” says Grant, adding that Bossanova additionally offers Ontario classics like a German Pilsner or an IPA. “It’s a little bit of everything.”

As for wine, Plisky-Somers is careful to stock the shop with ones that are organic, biodynamic, or sustainable. “We’re really looking to work with the small agencies based in Ontario that represent small-volume winemakers that really care about their farming and what they put into the bottles.” What makes this bottle shop so unique is that in the back of the shop, Bossanova has a tasting counter. Every couple of days, the duo change up the selections with three or four beers and wines that follow a certain theme, like wine-influenced beer or wine from a certain region. These can be served as a glass or in flights.

“It’s just really fun and gives us an opportunity to really connect with people and enable people to go outside the box to try different things that they might not ordinarily experience,” says Grant. If you’re getting flashbacks to the nineties while thinking about Bossanova, that’s because it’s named after the third album from American rock band, the Pixies. While this might seem like an arbitrary name for a bottle shop, it’s a testament to Grant and Plisky-Somer’s friendship.

“We started to really think about what other influences really shaped our lives,” says Plisky-Somers, “and we’re both huge fans of Pixies. When they first reformed about fifteen years ago, we went to the concert together and it’s one of our favourite albums. So, it was a pretty quick and easy decision.”