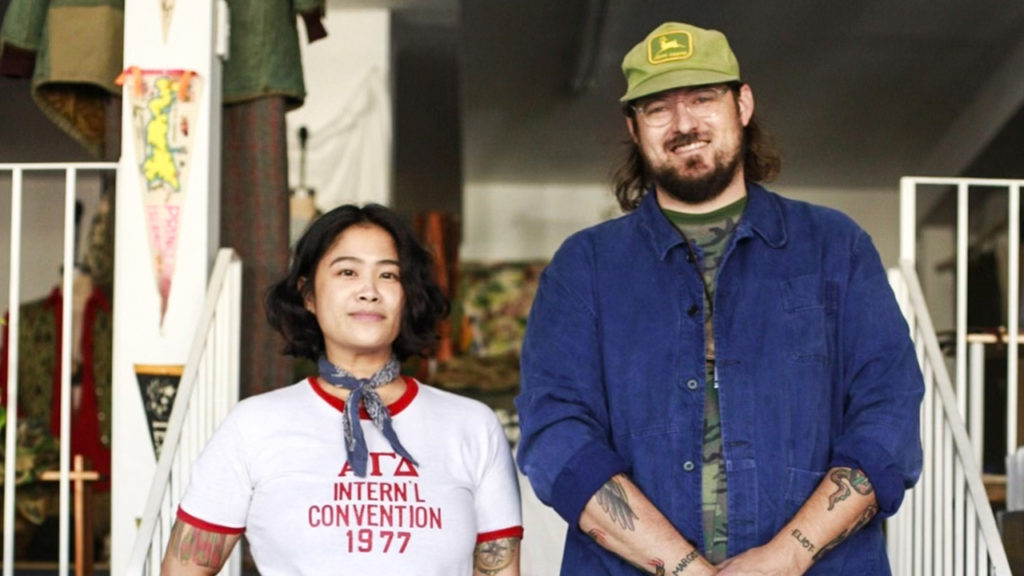 Some may say that the story of Coffee and Clothing started in Oakland, where Jen and Matt Schachtebeck first had the idea to open their own vintage store. Others may claim that the story of Coffee and Clothing began in South Korea, where Gabby Ondrade and Zoe Sylvester learned how to properly roast coffee beans. Ultimately, our story begins here, in Toronto, where sisters Jen and Gabby grew up. Born here, but soon transplanted to Florida and then later San Francisco, the Ondrade sisters’ roots are what led them back here.

Coffee and Clothing started off as just clothing: the Schachtebecks had been mulling over the idea of starting a clothing store when they were still living in Oakland, working over the years in corporate retail positions. “We moved [to Toronto] with the plan to open a store,” Matt says. They visited Jen and Gabby’s parents, who lived in the city at the time and ran a burger restaurant, and that kind of sealed the deal. Upon returning to Oakland, they packed up and shipped out.

Coffee and Clothing also started off as just coffee: Ondrade and Sylvester were living in South Korea and travelling throughout Asia in their spare time. “We were really drawn to coffee. First of all, from everything we learned in Asia about roasting, but also the community aspect of it,” Ondrade says. As they packed up their life in Asia, ready to move to Toronto, they wanted to open a café where they’d be able to use their newfound roasting skills and emulate the welcoming atmosphere that they found so enticing. One of the goals of Coffee and Clothing was that they wanted to “make it feel like you’re just walking into your friend’s house,” she says.

After returning to Canada from Asia, Ondrade and Sylvester crashed at the Schachtebecks’ place. During their stay, they all realized they wanted to open a store in some capacity, so the natural follow-up question was, Why not open one together? The rest, as they say, is history.

Since they’ve been open at 348 Pape Ave. for close to three years now, they’ve spent most of that time in COVID. The pandemic forced them to build an online presence, creating a sleek website and an Instagram page that boasts over 10,000 followers. Though they weren’t looking to expand, a second location at 841 Gerrard. St. fell into their laps just a few months ago. A block away from the original store, they were able to incorporate more interior space, allowing them to seat people indoors when winter rolls around in the coming months. “It’s also nice having the café as well, because we could keep the café open. So it also helped with pickups and clothing orders,” Matt says. “Everything was happening sort of organically.”

Organically. That’s how you could describe most of what happens at Coffee and Clothing both physically and figuratively. The blends they roast and sell are all fairtrade and organic, while the bond they have makes managing Coffee and Clothing a relatively smooth process. “I mean, we knew each other pretty well, so it was never hard to find a role,” Sylvester says. You would think four people running a business would cause a clash of competing interests, but with a genuine understanding of each other, it’s really not that difficult, and as Ondrade emphasizes: “It kind of just happened organically.”

The same goes for the cohesiveness of their brand. When you scroll through their website, the clothing all gives a similar vibe: casual, classic, and comfortable. The same kind of care goes into their blog posts, which covers a range of topics from behind the scenes of editorial photoshoots to The History of Rayon. They’ve also collaborated with local director Brandon Gordon to make a series of short films featuring intimate portraits of a collection of subjects with Toronto as a romantic backdrop – romantic in the sense that it’s beautiful and handled with care. I ask if building brand uniformity is at all difficult. “Um, it’s not,” Jen says with a laugh. “Honestly, it’s not really something we like to think too hard about. We know these people and think they’re cool.We have a really cool dude that we’re working with who makes these films with us and has a great vision.  I think it’s just the people behind it.”

These days, there’s a fatalism that permeates our discussions of climate change. The world is burning and I can’t do anything about it. Sure, I can stop using plastic straws, but massive corporations are still going to pump tonnes of greenhouse gases into the atmosphere, so why do I matter? In broaching the subject of sustainability – one of the core tenets of Coffee and Clothing – the founders approach it with optimism.

Jen emphasizes the importance of “just being aware of what you’re buying and the quality of it.” There’s an urgency to her tone, one that is often missing when this issue is discussed in our day-to-day, or online. “One of the easiest things you can do to help when it comes to global warming and sustainability is just being aware of where you spend your money, especially when it comes to clothing,” Matt says.

The group is comfortable with their two-store set up as of right now, but that doesn’t mean that expansion isn’t in their future. “It’s nice that there’s so much potential but you can pretty much do anything,” Matt says. Riffing off of each other, Jen chimes in, “Our little heart’s desire.” A chorus of laughter erupts on the other end of the line, all four co-owners in agreement.