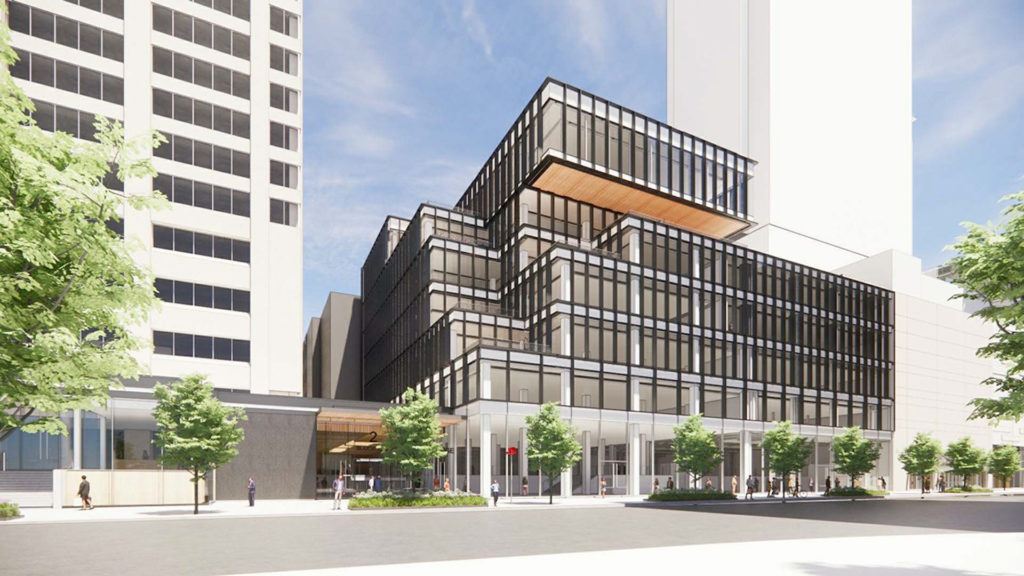 When it was announced back in February that the Hudson’s Bay located at the corner of Yonge and Bloor would be shuttering its doors after operating for nearly 50 years given its proximity to its Queen Street flagship location, not much was known about what would replace it.

But a new planning application is shedding some light on what will take its place — at least for a portion of the property.

The development is proposed by Brookfield Property. The commercial real estate firm that owns part of the Hudson’s Bay complex located at 2 Bloor St. E. would see the renovation and redesign of the retail podium into updated flagship retail space at-grade and at the concourse level, while the upper level of the current store would be converted into office space. The renderings show that a new façade is also in the works.

Brookfield’s portion of the complex also includes retail stores at the concourse level connecting directly to the Bloor-Yonge TTC station, as well a 36-storey office building located at 2 Bloor St. E., and the west half of the Hudson’s Bay store and retail complex.

The east side of the complex at 90 Bloor St. E. owned by Larco Investments includes the soon-to-be-opened W Hotel, and the 35-storey residences above it, as well as the above-grade parking structure.

The development application submission also shows that the existing level 6 area currently being utilized for mechanical and electrical services would be relocated to levels 4 and 5, and the floors within the existing atrium and some retail spaces at the south end of the concourse level would be removed for sidewalk access.

Toronto-based firm KPMB Architects, best known for skyscrapers like Maple Leaf Square, and auditoriums like the Minnesota Orchestra Hall, is set to helm the project.

When Hudson’s Bay opened its Yonge and Bloor location in 1974, the 260,000-square-foot space was the first major department store in the midtown area in 50 years. The space also featured three dining rooms and a 2000-square-foot exhibition hall for community use.

The landmark store will officially close its doors on May 31.