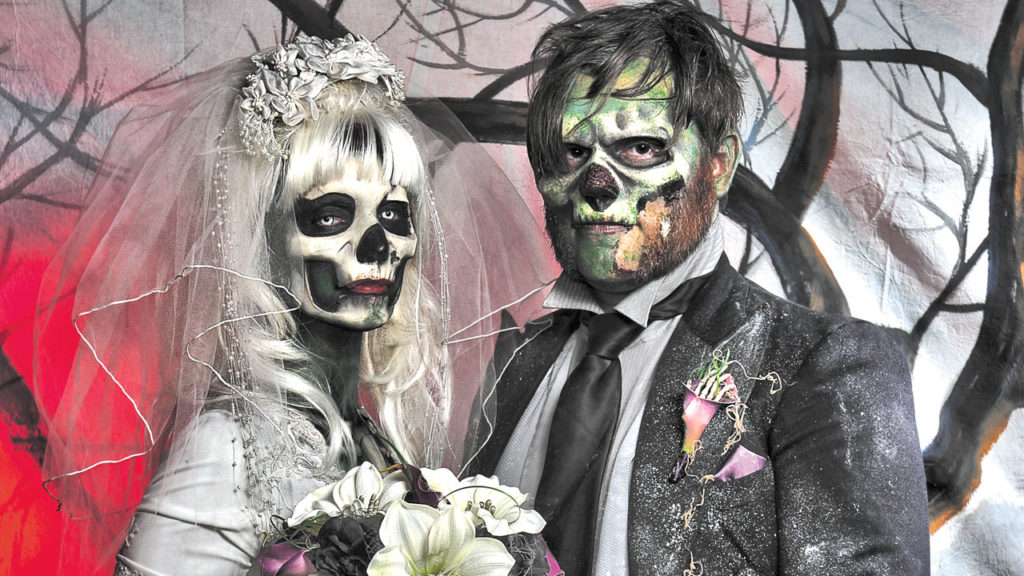 Thea Munster and Adam Invader just might be the GTHA’s spookiest couple. Munster was one of the organizers behind the famous Toronto Zombie Walk that ran from 2003 to 2016, and the pair are performers in their instrumental horror band Night Chill. They drive a hearse around town, have a 12-foot skeleton in their front yard and are parents to a black cat named Eerie, Prince of Darkness. Munster shares how the artist couple met and the details of their zombified wedding.

We officially met at the Festival of Fear in 2006, after having casually seen each other about town previously. I was promoting the Toronto Zombie Walk alongside the After Dark Film Festival, while Adam was volunteering at the Rue Morgue booth. That evening, I saw Adam at the after party, and I spent the evening talking to him. We began hanging out more frequently, with Adam assisting me with promoting the Toronto Zombie Walk that October. Both of us are fright film fanatics and love all things horror, so we clicked instantaneously.

It was super casual and started as friends hanging out. I invited Adam over to my house for dinner, and we watched The Corpse Grinders from my collection of horror movies I kept in a full-sized coffin. We ended the evening enjoying delicious Cuban rum and listening to horror music and hanging out in the back of my 1954 Pontiac Hearse “Hearsella.”

Adam practically never left! We started hanging out almost every night from then on, and Adam helped me prepare for the Toronto Zombie Walk. Shortly afterwards, we moved in together and bought a house in Hamilton. We still kept the Toronto zombie horde walking the streets each year as the event grew from seven people in 2003 to over 20,000 creatures of the night when we concluded the event in 2016.

It happened during a Zombie Walk in 2009, completely unexpected and in front of 6,000 rotting ambulatory corpses lining Trinity Bellwoods Park. I had no idea what Adam was planning, as I had been extremely busy with work and preparing for the event that year. Each year it had grown larger and larger, requiring advertising, sponsors, police involvement and public permits for parades and parks. Adam wanted to make an announcement at the beginning of the route, which I thought was a little odd. He got down on one knee and asked me to “walk with him among the undead forever,” and I said yes! The zombies howled and moaned in approval!

We decided that, since the undead of Toronto were kind of like an extended family, we should have the wedding at the Toronto Zombie Walk in 2011. To this day, we still cannot believe we were able to convince both of our families to dress as zombies! We tracked down a justice of the peace willing to dress up as a zombie priest. I was brought to the wedding in the back of my hearse enclosed in an antique coffin! Pallbearers carried my coffin to the altar while a zombie organist played, and as we approached the altar, my hand burst out of the casket with the bridal bouquet. After some spooky vows the justice said, “You may now kiss the bride,” and then I bit off a “chunk” of Adam’s face! We then joined the procession of the undead and stalked the streets of Toronto…. We could not have asked for a more perfect day.

In our relationship, being friends is the most important thing. You want someone who would help you hide the body, you know? Times haven’t always been easy, but our ability to laugh off the small and inconsequential things and keep the fun going with collaborative and otherworldly projects really helps, whether it’s working on costumes, decorating the 12-foot skeleton that lives permanently in the front yard or co-ordinating outfits with the cat. This year will be our 10-year wedding anniversary, and we are hoping to make the next 10 just as adventurous and horror filled.