This ain’t Tex-Mex and no, they don’t have fajitas! - Streets Of Toronto
Skip to content 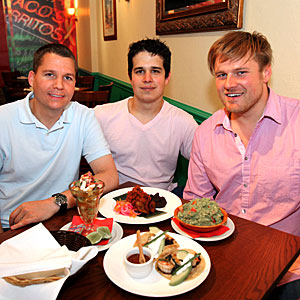 TODAY’S EXISTENTIAL QUESTION: are Torontonians ready for upscale Mexican cuisine if it comes with high-end prices?

In Toronto, our exposure to Mexican food has been Tex-Mex, though a few restaurateurs have tried to educate us to the joys of mole and ceviche. This second branch of Milagro, from downtown on Mercer Street, may have cracked the code. The place is as casual and noisy as one would expect and, to be sure, they have not ironed out the kinks in their service. But there is no escaping the fact that this is food to be reckoned with.

The appetizer of taquitos adobados ($10.95) sees two tacos filled to bursting with seared beef tenderloin that has been tuned up by “three chile adobo.” Definitely spicy, but the beef and its marinade hold their own.

Since Milagro takes such pride in its ceviche, offering four varieties, this begs to be sampled. Each comes in two sizes ($9.25, $13.95 for large). A classic tulipshaped sundae dish is brimming with large chunks of sea-sweet shrimp, diced cucumber, cilantro and a gentle heat. All, of course, has been “cooked” in fresh lime juice sans heat.

For our entrees, we focus on avoiding the ubiquitous taco and enchilada. Cochinita pibil ($19.95) is described as “pulled slow roasted pork in achiote and orange marinade with pickled onions and habaneros.” The achiote gives it depth, and the habaneros give the dish its heat.

Milagro spends the time to cook it slowly until the muscle breaks down and then simmers it in a memorable marinade.

Pollo con mole poblano ($19.50) is one of the more familiar dishes. Made from a dozen or more spices, the most noteworthy of which is unsweetened chocolate, this sauce is a balancing act. The strong elements could clash, and I have had mole that I could not eat as a result of too heavy a hand with the cinnamon. Tonight, the reddish brown blanket draped over a huge, moist chicken breast is sweet/savoury perfection.

As we order, we notice that beans and rice are listed as side dishes and inquire as to whether or not our dishes come with either. Upon learning that they do not, we are disgruntled but order one side of each. When the platters arrive, one has beans and the other has rice, so we cancel the sides we ordered.

Can a family-style eatery on Yonge north of Lawrence succeed with complex Mexican food and prices that match?

Ratings are on a scale of one to five stars