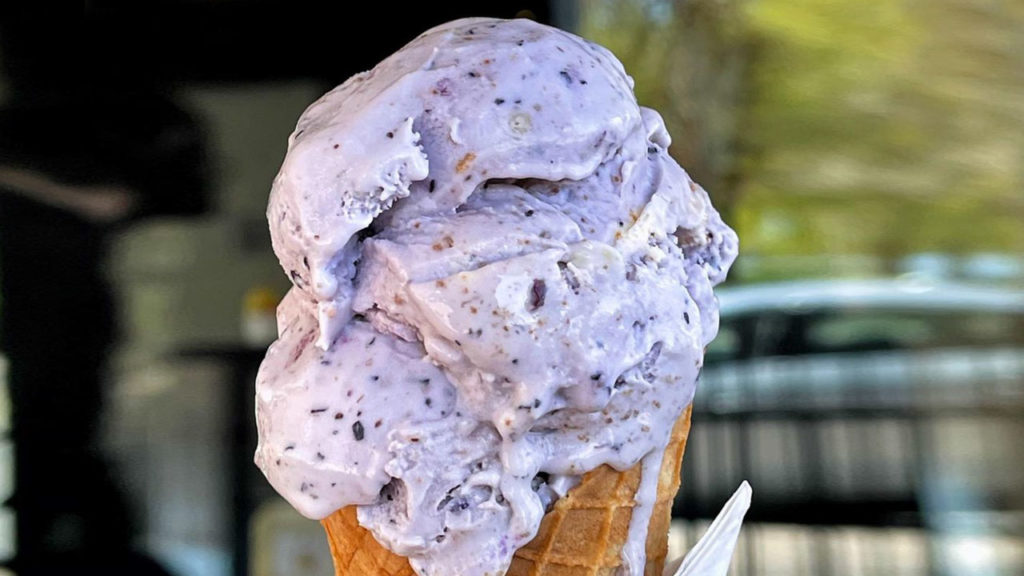 Toronto entrepreneur Angela Phung took ice cream season to the next level with her latest venture, Happy Sundae. Phung, who also operates aka.the store, recently debuted her new dessert boutique to the King West crowd, serving up farm-to-table scoops with fresh and unique toppings. “Happy Sundae is a little happy place located at 85 Portland St. Toronto,” the website reads. “Aka, King West’s newest ice cream dessert heaven, specializing in soft-serve ice cream and a wide range of toppings. Whether it’s in a cone or cup, our Sweet Artists are ready to create your next dessert masterpiece because everyday [sic] is a Happy Sundae.” Of course, in typical Phung fashion, the shop is nothing if not trendy, complete with a graffiti wall and Instagram-worthy floral accents. The decorations serve as the perfect backdrop to each Sweet Art of the Day creation, crafted in sundaes or colourful flavoured cones in flavours like s’mores sundae and orange Creamsicle.

With ice cream season in full swing, two sisters from Port Carling have scooped out their corner of the Toronto market with their Instagram-worthy shop, Bar32. Sisters Sydney and Chloe Carron took their sweet treats from pop-ups in Port Carling to a Toronto pop-up on Macpherson Ave., where they serve handmade, artisanal ice cream bars in weekly rotating flavours alongside a wide variety of scoop flavours. The list of flavour offerings can be found on the website. Inside the space, the walls are decorated with cute, family-style photos on a gallery wall and a block-letter decoration displaying the prices for scoops and bars. Bar32 originated as a Port Carling warm weather special, popping up last summer to serve the handmade bars out of a renovated, ice cream–ready trailer the sisters operated in Muskoka. Last summer, Chloe and Sydney partnered with the Maddie Project to create a unique, blueberry-based bar that sent all proceeds to the charity, which supports youth mental health initiatives in the Muskoka community. The Bar32 pop-up is spending the summer at 3 Macpherson Ave. in the Summerhill neighbourhood.

Having taken over the space formerly occupied by Lick It Gelato, Ice Creamonology officially opened in March, having launched last year as a pop-up. The 500-square-foot ice cream shop is run by owner Onur Yilmaz, who trained and worked as a chef in Turkey before immigrating to Canada and studying culinary management at George Brown College. “My wife and I come from southern Turkey, where we have at least eight months of summer, and ice cream is one thing you need to eat every day or you’ll never cool down!” Yilmaz says with a laugh. “We have so many good memories of eating ice cream, and I love to make it. I combine my culinary skills with making ice cream, and that’s one of the reasons it’s pretty popular — my flavour combinations are unique.” There are eight classic flavours that are a permanent fixture, including Turkish coffee, Turkish pistachio, roasted hazelnut, chocolate fudge brownies, Tahitian vanilla, blueberry and white chocolate cheesecake, coconut cream and mango sorbet (which are both vegan) and the most popular flavour, Black Sea tea, which packs an aromatic punch that’s similar to Earl Grey.

Roll Me Up Ice Cream

Ice cream takes on a whole new persona at this dessert shop where ice cream is — you guessed it — rolled. Offerings include pre-selected combinations like blueberry cheesecake and birthday cake, but create-your-own options are also available with bases like pistachio, mango and coffee and a huge array of toppings from fresh fruit to coconut shavings to condensed milk. The concept of rolling ice cream is also called stir-fried ice cream and has roots in Thailand, where it’s typically sold by street vendors. It’s laid out very thinly on a metal, plate-like surface and then scraped into rolls, and the process makes each bite just a bit creamier than traditionally scooped ice cream. Milkshakes and bubble-rolled waffles are also on the menu.