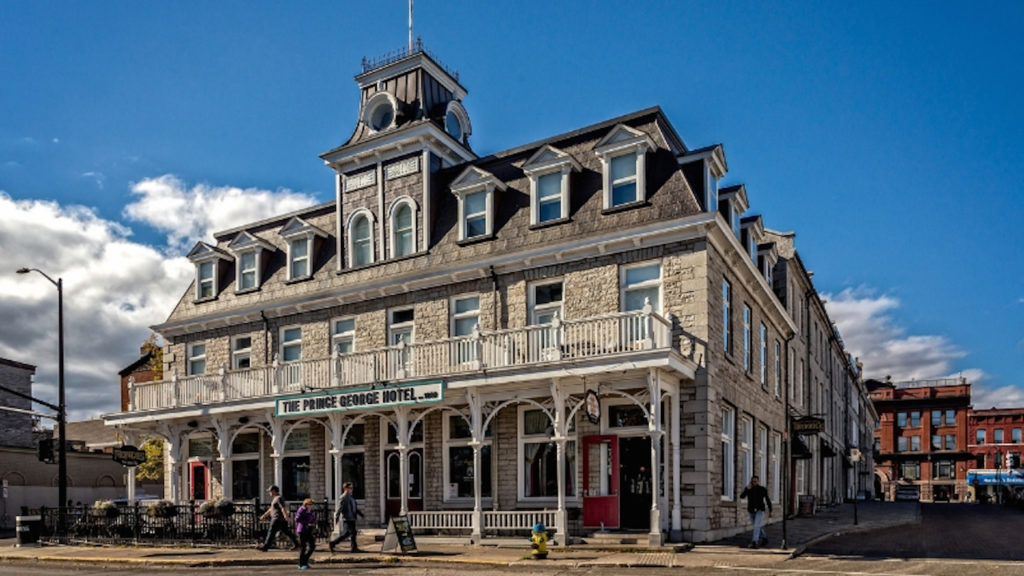 Whether you’re a ghost hunter or just someone looking for a bit of a scare, Ontario seems to be bustling with paranormal activity of all kinds. This Halloween, take a local road trip to one of the spookiest haunted inns and hotels in Ontario.

These four locations are home to local lore about forlorn lovers, stubborn former residents and even a wronged Canadian soldier. Who needs a Halloween party this year! Hop in the car and explore one of these Ontario ghost hotels instead.

Inn at the Falls in Bracebridge You’ll find a quiet-looking Victorian manor at the top of the waterfalls located in Bracebridge, Ont. But many visitors stop by this town solely to investigate the manor, which now operates as the Inn at the Falls, for paranormal activity. Reports say that there are up to four separate spirits haunting those halls.

The building started as a private residence in the 1870s and was soon bought by judge William Crosby Mahaffy. He lived there until his death in 1911, and visitors say he is likely one of the ghosts haunting the inn now. Patrons of the inn have noticed a distant apparition closely resembling the portrait of the judge that still hangs on the walls of the inn, and some have even reported having conversations with him without knowing they were, allegedly, communicating with a ghost.

Mahaffy’s former bedroom is said to be haunted by a woman in a long dress, and people staying in the room have seen her drift from one side of the room to the next before drifting off. If you’re easily scared, we recommend you keep your eyes shut as tight as you can overnight — although you might still notice the sudden temperature changes, apparently a common occurrence where ghosts are concerned.

The Prince George Hotel in Kingston

Kingston is one of the most haunted places in Ontario, from the Kingston Penitentiary to Fort Henry, which is the site of oft-reported paranormal activity. But the Old Prince George Hotel likely takes the cake.

The former hotel was originally the home of the Herchimer family in the 1800s. Their daughter, Lily, fell in love with a sailor — a relationship her parents definitely didn’t approve of. When her lover happened to visit the town, Lily made sure to hang a lit lantern in the window to let him know when it would be safe to visit. Alas, as is often the case in the 1800s, the fire caused an accident — a gust of wind blew the lantern into her room when she fell asleep, and she reportedly died in the fire.

If you’re in the neighbourhood, you might see her figure still standing at her third floor window, waiting for her lover to return.

The Olde Angel Inn in Niagara

Niagara-on-the-Lake may be a sweet spot for a visit now, but back in 1813, it was the site of an American invasion during the war of 1812. But the Ontario building of the Olde Angel Inn is believed to have been built back in the late 1700s — and so, of course, it’s haunted by ghosts in its halls.

It’s reported a Canadian militia officer was killed at the inn (which was named the Harmonious Coach House before 1815). Captain Colin Swayze stayed an extra few days in the town before joining the British retreat, hoping to see the woman he believed to be his true love. Unfortunately, American soldiers were sent to search the inn, and though Swayze tried to hide, he was eventually fatally wounded.

Visitors say the ghost of the captain haunts the grounds of the inn, and footage has even been caught of a ghostly shape wearing a soldier’s uniform. The owners of the inn keep a British flag flying out of an abundance of caution — it’s believed Swayze’s ghost will remain harmless as long as it stays there.

Fair warning to all the Americans hoping to stay at the inn for a few days — you might be visited by a particularly angry ghost at night!