There’s something about Mae - Streets Of Toronto
Skip to content 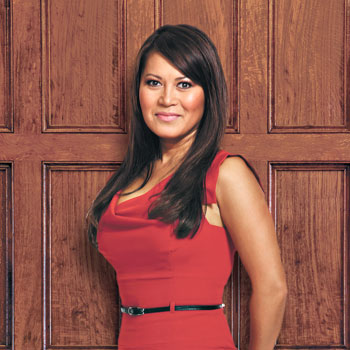 After a meteoric career leap that took her from Toronto to Boston to New York City, sportscaster Hazel Mae made her grand return to her hometown last month as the newly minted lead anchor on Sportsnet Connected. And she wouldn’t have it any other way.

Even though her sports reporting career had exploded in Boston as the lead anchor on the New England Sports Network, and it boomed with the MLB network in New York, Mae knew Toronto was where her heart was.

Having Sunday night family dinners in Markham, spending quality time with her hockey team of nieces and nephews and hanging out in her hometown with her husband, Kevin Barker, a retired minor league baseball player, Mae knows she made the right decision.

“I felt I was missing out on all of the celebrations: birthdays, anniversaries and holidays,” Mae says.

Her fiery passion for sports was ignited by her father, a Filipino immigrant who spent countless hours with young Mae watching the Toronto Maple Leafs on their one television.

Her dad’s love for the game solidified in Mae an obsession with competitive sports. With a melodious voice and quick laughter, it’s easy to understand why she was offered hosting jobs in the U.S. for news, weather and entertainment programs. Though lucrative, she turned them down. Mae explains, “I get paid to do what I do anyway.”

She also bartended at a hockey rink just to be close to the games.

When Mae learned that the Sportsnet radio station was looking for a female voice, she immediately put together a tape, and a natural sportscaster was born. Mae admits, “I knew that I could get into games for free if I worked in sports media.”

And having a job in which she gets to do what she is most passionate about is still a dream come true for Mae.

She has seen sports reporting transform over the course of her career, particularly with the number of female reporters now on the scene. Because of the “pioneers,” as she calls them, of 20 years ago, it is now rare not to see a female sideline, pre- or post-game host. And Mae is proud to be one of these women in a field that is no longer solely dominated by men. Mae says, “I’m just the chick who loves sports,” which appeals to both a younger and an older demographic of women.

For Mae, this is one of the nicest compliments because approval by women, and someone’s grandmother at that, reaffirms her reliability. Though her huge male fan base may partly be based on her looks, it is also because she’s knowledgeable, personable and extremely well-prepared.

“I would like to appeal to men for being credible,” Mae says.

A genuine sports fanatic, her enthusiasm jumps off the screen.

It is this contagious enthusiasm that has some women, who are normally less than thrilled by a day spent watching sports, turning on Mae’s program. Female viewers are intrigued by the drama, suspense and emotional highs and lows Mae brings to her reporting.

“[The games are] like a huge soap opera. You’ll never have the same game two days in a row,” she explains.

Still surprised by fans who approach her to sign their baseballs, Mae always makes sure that they really want her name on their precious treasures.

“I don’t want to compare myself to a professional athlete,” she says. “Also, I feel like they may stop asking.”

Enjoying her moment in the spotlight, Mae is touched by her supporters’ interest in her. Even the most overzealous of followers gain her sympathy.

When a lovestruck fan camped out at her Boston station until he met her, she was disconcerted but also felt compassion toward someone who had formed a connection with the person he saw on television. When another fan etched her name on a writing desk and offered it as a gift to her, she declined but appreciated the gesture.

Now home, Mae reminisces about her career highlights: in Toronto, during back-to-back World Series wins for the Blue Jays, New York during the Yankees World Series triumph, Boston when the Celtics were crowned the NBA champions, and New England when the Patriots scored their Super Bowl win.

But witnessing the Boston Red Sox win the 2004 World Series after 86 years of losses was incomparable.

The Red Sox were actually in St. Louis, but Mae was reporting from a packed Fenway Park when the almost century-old losing streak finally ended.

“People were screaming. Grown men who had lived to see the Red Sox win were crying, and people spilled out onto the streets,” Mae remembers. She describes the swarm of people at cemeteries, toasting and draping Red Sox memorabilia over headstones of those who didn’t live long enough to watch their hometown team finally defeat their competitors.

Mae has had the amazing opportunity to interview some of the most influential people in the sports world, including the iconic Nolan Ryan, Hall of Famer and owner of the Texas Rangers. However, were she to choose someone she would most like to interview, it would be Jerry Jones, owner of the Dallas Cowboys.

Mae says, “Jerry Jones has his hand in everything. He transcends sports into business and entertainment.” His drive, which mirrors her own, fascinates her.

Being in Toronto again means hockey, and Mae is excited by the challenge.

“It’s a bit like cramming for a test.” She laughs because, after eight years of being away, though the game itself hasn’t changed, the faces certainly have.

Mae advises keeping an eye on Ryan Nugent-Hopkins, the number one overall pick in the 2011 NHL Entry Draft and current sensation for the Edmonton Oilers.

Mae laughs when talking about what she does on her off time because, really, she watches sports with her husband.

But after landing in Toronto, she couldn’t wait to have her three favourite things: Swiss Chalet, a bloody Caesar from the Keg and an iced cappuccino from Tim Hortons: all uniquely Canadian. Her cherished things also include Canada’s sports teams.

In game seven of the last Stanley Cup, the Boston Bruins faced off against the Vancouver Canucks. Who did Mae cheer for? “There’s no contest. Canada always trumps.”

And so does Toronto because Hazel Mae is home where she belongs.