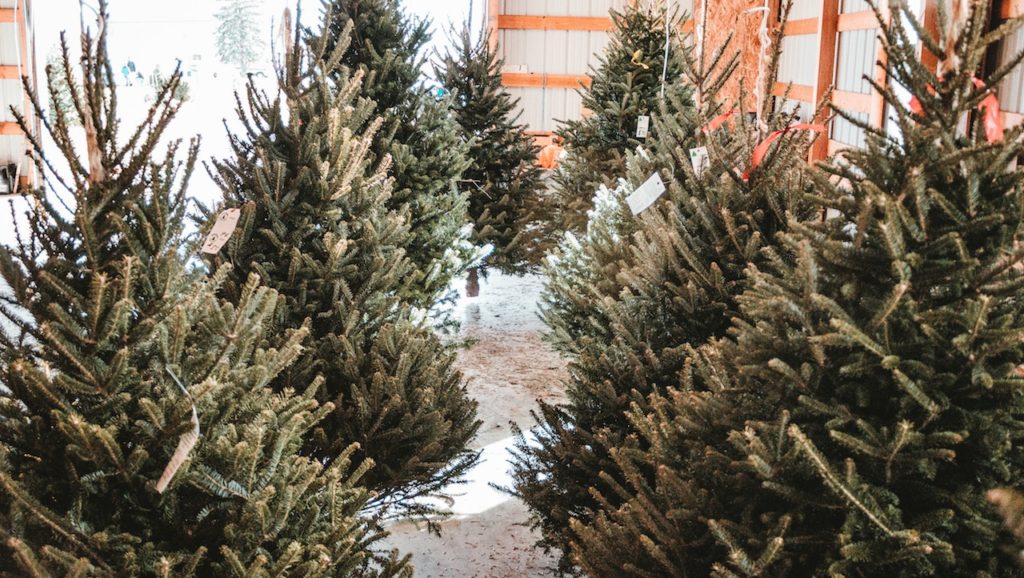 In 1994, Doug Drysdale was the President of the Christmas Tree Farmers of Ontario (CTFO) , a non-profit organization aimed at providing support for Christmas tree farmers. Their annual meeting was held in Nova Scotia with around 400 members flocking to a hockey arena to congregate. At the meeting, Drysdale asked for all members under 50 to raise their hands. Only 20 members’ hands went up. “25 years later, those guys that were 50 are 75, the guys that were 60 are probably dead. And who’s doing the work?” Doug asks rhetorically. “Nobody.”

Drysdale’s Tree Farm, the family business run by Doug Drysdale, is one of less than 2000 farms growing Christmas trees in all of Canada. Founded by his father, H. Reginald Drysdale, a pioneer in the field, Drysdale’s has been producing Christmas trees since 1945. Though their main customers are in North America and the Caribbean, they’ve “shipped trees as far away as Hong Kong,” says Drysdale.

Christmas trees take around 10 years to grow into the size where they’re suitable to be sold. As a result, the process of farming them isn’t built to satisfy the immediate gratification of certain profit seekers. Farming has long been a delicate business, but when it takes a decade for new farmers to see profits, they’ll be far more inclined to enter different industries where they can make the same amount of money, if not more, doing far less manual labour.

Reports of Christmas tree shortages in Ontario and across Canada have taken over holiday news coverage. Many have made trips to the usual plant nursery or tree farm near them for Christmas trees only to find that they’ve sold out already or have much slimmer pickings than years before. Those in the industry say there’s more than one reason for the shortage.

Fewer trees are being planted

Drysdale details that in the 70s, 80s, and early 90s, “hundreds of thousands, millions of trees,” were being produced. But since land prices have skyrocketed, the incentive to continue growing trees has significantly decreased. “If you have a piece of property that was worth so many dollars an acre in the 80s or 70s,” Drysdale says, “that property is worth maybe 10 times what it was.” In short, people are ready to sell.


But to whom? There’s not one specific massive entity that’s buying all this land or an evil development group razing precious farmland. Instead, Drysdale has noticed that it’s often being sold to people who work in the corporate world looking for a low-effort investment. Knowing the state of land prices, individuals will buy a piece of land, not touch it for a decade or two, and then sell it again because they’re sure to turn a profit.

The shortage is not only putting a strain on farmers, but also proving to be a pain to customers’ wallets. With a massive market in the United States, the shortage of Christmas trees has caused prices to skyrocket. Drysdale explained that a nine foot Fraser fir sold at $110 wholesale is sold in Philadelphia for $250USD, essentially tripling in price by the time it gets into customers’ hands.

It isn’t only an unwillingness to stay in this industry that’s causing the lack of production. Trees may be planted, but there is no guarantee that they will survive long enough to be culled and sold. Climate change has added an element of unpredictability to farmers’ already precarious situation. “Whether there’s ice storms that are doing damage or insects that are killing off the trees, that’s reduced the amount that we can bring in,” plant nursery owner Carlo Ammendolia says.


Ammendolia, the owner of Angelo’s Garden Centre, a plant nursery in Vaughan, has been selling Christmas trees every holiday season for at least 15 years straight. “We had them come in on the 22 of November,” Ammendolia says, “Right now, it’s only Dec. 4 and we’ll probably be sold out today.”

While the shortage has led to many individuals leaving the industry, price increases have convinced some farmers to more readily commit. “There are some nurseries that are expanding. Whether it’s going to be here, or whether it’s going to be in the U.S. or in B.C., for a regular nursery product, they’ll fill a void because prices will go up. And when prices go up, people will do the math, and then they’ll go back to growing Christmas trees,” Ammendolia says. This is a sentiment echoed by Drysdale, though he does note that there are limitations. “The shortage is not going to go away; it’s going to be here for at least six or seven years. And I don’t think personally that it will ever really go away because the population is growing.”

When asked about what could mitigate this shortage, Drysdale said that this year there aren’t even enough artificial trees. With supply chain issues wreaking havoc over most industries, the Christmas tree one was not left untouched. The massive delays of shipping containers has prevented the regular supply of artificial trees to be available to the public.

Having been in the business for as long as he has, Drysdale has witnessed the slow decline of an industry which is facing increased pressure to deliver. Speaking of the heightened demand for Christmas trees, he said, “Even if the supplies increased over the whole continent, it still won’t increase fast enough to take over the supply of potential customers that are out there.”