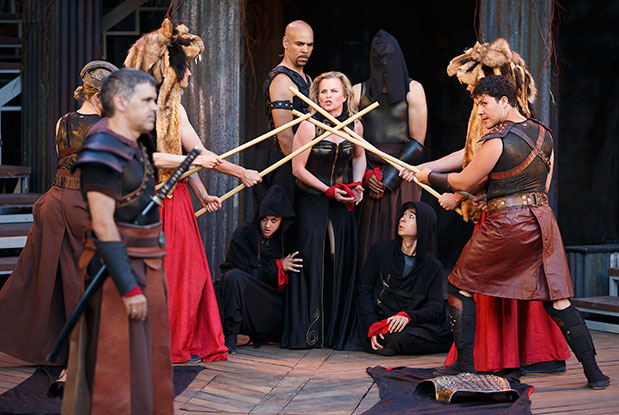 Shakespeare’s first tragedy, Titus Andronicus, doesn’t have the memorable soliloquies of his better known plays, but the Canadian Stage / York U Theatre Department collaboration now on stage at Shakespeare in High Park is a bloody good show, action-packed and easy to follow. In this tale of revenge, the fictitious titular character (played by Sean Dixon) is a Roman general returning victorious from a war with the Goths, whose queen, Tamora (Shauna Black) gets married to Rome’s new emperor, Saturninus (James Graham). A circus of revenge and killing then ensues.

Though the story is set in Rome, director Keira Loughran infuses the presentation with elements of feudal Japan. Roman soldiers dressed like samurai-centurions, and Goths like goth-ninjas, all wearing tabi boots (fantastic work by costume designer Angela Thomas) and battling with bamboo staffs and samurai swords, accompanied by the invigorating music of taiko drums (sound designer and composer Sam Sholdice).

After the opening battle scene comes the first few minutes of necessarily exposition-heavy dialogue (the only slow part of the show) that soon gives way to acts of treachery, setting multiple characters on paths of vengeance.

Shakespeare critic S. Clark Hulse once calculated that Titus Andronicus contains “an average of 5.2 atrocities per act.” In an effort to maintain Shakespeare in High Park’s family-friendly tone, Loughran has managed to render the violence with enough clarity to give the acts their due weight but with an unrealism that makes them watchable. Parents should be prepared to have some frank follow-up discussions if they bring children old enough to comprehend the depiction, albeit stylized, of violence and sexual violence. The subject being war and revenge, this play is not meant for children, but Loughran has worked with her props builders and fight director Simon Fon to bring out the images the story demands without provoking the audience to turn away.

Loughran incorporates movement effectively, even some kabuki voguing, which refreshes your attention and contributes to the quick pace of the show. The liveliness of the performance is enhanced by the life of the park, with the occasional bird swooping over the stage as if it were part of the show. (Make sure you bring bug spray, or buy a squirt at the concession stand.) The stage is used to tremendous effect, with action on multiple levels, and numerous entrance and exit points, giving the sense that the characters are inhabiting their own world rather than merely stepping on and off the stage.

The characters and lines in Titus Andronicus are less memorable than those in Shakespeare’s better known tragedies, but while you may not find yourself quoting this play, the theme of the fruitlessness of war and vengeance makes the play tragically current.

Titus Andronicus will run on Wednesdays, Fridays and Sundays through Aug. 31.

Check out our review of Shakespeare in High Park’s other production, As You Like It, here.